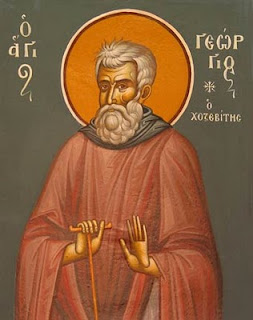 Today, 8 January on the Church’s calendar, we celebrate the memory of the Holy George of Chozeba, or ‘the Chozebite’ (6th-7th centuries). St George was one of the survivors of the terrible Persian conquest of the Holy Land in the early 7th century. Considering that his monastery in the Wadi Qelt is one of the few still-inhabited monasteries of the once burgeoning monasticism of Palestine, his life is not widely known. St Nicholas’s account of him in the Prologue is particularly terse—‘He lived the ascetic life in the seventh century in the Chozebite community on the road from Jerusalem to Jericho, where our holy Father John the Chozebite first lived as a monk.’ [1]

John Binns points out that the Prima Vita written by St George’s own disciple, Anthony the Chozebite, which was published in Analecta Bollandiana, [2] has not been translated into English. [3] But what appears to be an abridged version can be found in the Holy Apostles Convent’s The Lives of the Saints of the Holy Land & the Sinai Desert, [4] and it is on this, as well as Derwas Chitty’s summary of the Life, [5] that I shall base this post.

St George was born in Cyprus to pious parents with moderate land and means, ‘and was reared in ever form of piety and respect’. [6] An older brother, Heracleides, had become a monk at the Lavra at Calamon while on pilgrimage in the Holy Land, and the youth longed to join him there. But when his parents died, one of his uncles schemed to marry the pious young man to his daughter. St George sought refuge in a monastery where another uncle was the abbot, but when he was found there, the young man at last took flight to the Holy Land.

As he was still too young to be admitted to the Lavra at Calamon, Heracleides entrusted his brother to the abbot of the monastery of the Mother of God at Chozeba, who, ‘after he observed the youth’s fervor and monastic piety, tonsured him a monk’. [7] The full extent of his piety, however, soon became known in an extraordinary way. As Chitty tells it, St George was put ‘under a rough old Mesopotamian monk as assistant gardener. When the old man struck his apprentice for a supposed fault, [8] the hand that struck was dried up, but was healed at the young man’s prayers’. [9]

As so often happens, news of the miracle traveled quickly, and the young monk found himself at the centre of much unwanted attention. Rather than swallow ‘the bait of vainglory’, [10] he secretly left Chozeba and joined his elder brother at Caramon. According to Anthony:

Their way of life in this place was as follows: Never did they partake of food that was cooked on the fire, except when they were visited by others, and they ordered the doorman of the tower to keep the leftover food from one Sunday to the next. By this, they sustained themselves. The basin that was used for food was never washed, nor was it emptied. It abounded with worms, and the smell it emitted was sensed from afar. They never tasted wine. These things were sufficient to them. [11]

St George remained at Calamon until the death at the age of seventy of his brother, Abba Heracleides, whom Anthony describes as ‘a man full of goodness and faith, adorned with all the virtues and famed throughout the Jordan Valley as a virgin, a man of stillness, without possessions, merciful, and continent above everyone else’. [12] Left ‘alone in the cell’, St George ‘grieved and lamented the death of his brother, but he continued his way of life and austerity with courage, and was beloved by all’. [13] But when the abbot of the lavra fell asleep in the Lord, the monks fell to arguing over who was to be the successor, and our holy Father was told in a vision to return to the monastery of his repentance, Chozeba, once again.

At Chozeba, St George was given a cell by the holy elder Leontius, who ‘had achieved such virtue through almsgiving that, after his repose, one of the elders saw the holy Leontius standing completely enveloped in fire before the holy table’. [14] There St George followed the custom of the cell-dwellers in going to the cœnobium every Saturday evening for the Vigil and Liturgy and trapeza on Sunday, ‘But,’ according to Chitty, ‘he would never spend Sunday night in the cœnobium.’ [15] Indeed, Anthony tells us, ‘No one knew how he fared or conducted himself in his cell, except that he had neither wine, nor oil, nor bread, nor garments, other than a short rason, that he wore in church.’ [16] It seems St George would collect rags to sew together for his garments and mattress, and bits of discarded food and leftovers to grind up and make into dried balls for his sustenance. [17]

At this point, Chitty tells an interesting story behind the Life of St George and its author, Anthony the Chozebite, as well as offering some insightful remarks about the Vita:

Some time towards the end of this period, two aspirants to the monastic life, warned that the route to Rhaithou was infested with Saracen robbers, were advised to come to Choziba, where the hegumen Dorotheus received them, and tonsured them in due course. But one of them, going up with the hegumen to the Holy City, slipped off unbeknown and made his way after all to Rhaithou. His companion Antony, must distressed, contemplated following him thither. Dorotheus, failing to dissuade him, appealed to George, who proved more persuasive, and from this time Antony became George’s disciple and constant attendant. To him we owe the saint’s Life, written some twenty years later, when Modestus was Patriarch (i.e. in AD 631), and Dorotheus had become Crosswarden. While historically reliable, he is not primarily a historian as Cyril of Scythopolis may be said to be. But he is more concerned than Cyril to enter into the spirituality of his master and convey it to us. Herein is his great value, for this is the generation which had known the old Roman security and survived its shattering by the Persians. The besetting sins of his generation he sees in pride, shown especially as aphobia—lack of fear of God—and a ‘contemplation falsely so called’; and judgment of our neighbour. Love and respect for God and for our neighbour constantly urged. In a world which certainly did not undervalue dogmatic orthodoxy, we are glad to find his master’s words quoted: ‘For I tell you, brethren, that there is not a Greek, or a Jew, or a Samaritan, who has genuine piety and gentleness, who is not loved and found acceptable with God and with man.’ [18]

But to return to the main progression of our story, St George, having heard about the incursion of the Persians into the Holy Land and their capture of Damascus, and ‘completely inflamed by spiritual love for the fulfillment of the divine will, . . . supplicated the philanthropic God with continuous tears to take pity upon His people’ and deliver them from the Saracens. In response, however, he was told to ‘Go down to Jericho and see the works of the people.’ [19] Sufficiently horrified by the experience, the elder ‘wept and lamented because of the irreverence and perversity of the people, or rather, their ignorance and perversity’, and prayed to God with the following, terrible words: ‘Master, God and Lord Who willest that all be saved and come to the knowledge of the truth, raise Thy rod and punish this people, for they walk not according to knowledge.’ Then, seeing a vision of a rod of fire extending from the Holy City to Bosra, in Syria, St George knew that what he had just prayed for would be carried out, and he wept for the people of the Holy Land. [20]

When the Persians attacked Jerusalem, freeing ‘all the enemies of the Roman order . . . to roam the country in search of plunder’, the abbots of Mar Sabas and Chozeba took most of their monks to Arabia. [21] St George however refused to go, and insisted that Anthony stay as well, saying, ‘Though the Lord may chasten us for our sins as a compassionate and loving Father, He will not forsake His Holy City, but His eyes ever watch over it and over this land as the Land of Promise, unto the end of the world, according to His promises.’ [22] Eventually however, St George was persuaded to leave his cell and hide. During this time Anthony stayed with him, and while he was often in danger from the Jews and Muslims, he was not taken, ‘protected by the Old Man’s prayers because he had obeyed his word’. [23] When at last the elder was found by a band of the Saracens, ‘something in George’s bearing made them let him go’ [24]—in Anthony’s words, ‘When they saw Saint George to be poor, very thin and venerable, they revered his state; being incited by God, they gave him a straw bag filled with bread and a vessel of water, and released him, saying: “Go wherever thou wishest to save thyself!”’ [25]

Thus at night he went down to the Jordan, where he stayed until the Persian army passed Jericho on their way to Damascus with captives from Jerusalem. Having stayed for a while in the Holy City, during which time his disciple Anthony was with the abbot and other brethren in Jericho, [26] St George returned to Chozeba with the rest of the fathers. ‘But’, according to Chitty, ‘even George returned only to the cœnobium, not to the outer cells. For one would hardly dare now to venture into the gorge alone: since the Persians, it had become all savage with wild beasts and unclean spirits.’ [27] Back at Chozeba, St George ‘daily taught the brethren, and a great number of miracles were wrought’. [28]

The faithful disciple and hagiographer, Anthony, tells a touching story of St George’s final hours. He writes, ‘During the evening when the blessed one reposed, in order to show the confidence with which he departed to the Lord, by God’s economy, a crowd of strangers arrived.’ It seems that Anthony, as monastery cellarer, was detained by the guests just when he so desperately wanted to be with his dying elder. But finally, he tells us, the elder sensed his distress and sent the message: ‘Do not be sorry or agitated, my child, but complete thy ministering, and I will wait until thou comest.’ When at last Anthony had finished his duties, he went to St George, who embraced him, kissed him, and blessed him, and, turning to the East, said three times: ‘Come out, my soul, now in Christ, come out!’ And with this, ‘he surrendered his spirit to the Lord, with Whose help he strove and accomplished a life worthy of praise and above reproach.’ [29] Finally, Anthony concludes, ‘After they buried him with psalms, hymns and spiritual odes, they laid him to rest in the tombs of the holy fathers. Now he is found among the choirs of the saints and intercedes with them on our behalf and for all the world.’ [30]

[4] Anthony the Chozebite, ‘The Life & Struggles of Our Holy Father Among the Saints George the Chozevite’, The Lives of the Saints of the Holy Land & the Sinai Desert, trans. Holy Apostles Convent (Buena Vista, CO: HAC, 1988), pp. 1-9.

[8] According to Anthony, this incident took place ‘by the tombs of the five holy fathers, who were laid rest there’ (ibid., pp. 2-3). I can’t seem to figure out who these ‘fathers’ would be.

[17] I can’t figure out why Holy Apostles Convent insists on translating the word for these things as ‘spheres’ when ‘balls’ would seem to do quite nicely!