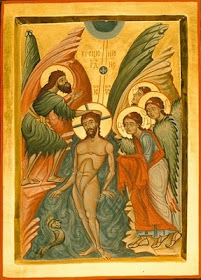 Today, 6 January on the Church’s calendar, we celebrate the Holy Theophany of our Lord and God and Saviour Jesus Christ. In the prayer of St Sophronius of Jerusalem at the Great Blessing of the Waters, we read, ‘In the preceding feast we saw Thee as a child, while in the present we behold Thee full-grown, our God made manifest perfect God from perfect God.’ [1] In the words of Archbishop Andrei of Novo-Diveevo, ‘And here, for these past days, the Holy Church has been calling us to the shores of the Jordan, and today, on the day of the Baptism of the Lord, she reveals to us a great mystery—the Manifestation of God.’ [2] St Diadochus of Photiki teaches that ‘the holy Logos of God took flesh and, being God, He bestowed on us through His own baptism the water of salvation, so that we might be reborn.’ [3] Here is the reading from the Prologue for today’s Feast:

When the Lord Jesus had lived for thirty years from His birth in the flesh, He began His teaching and saving work. He marked this very beginning of the beginning by His Baptism in the Jordan. St Cyril of Jerusalem says: ‘The beginning of the world—water; the beginning of the Gospel—the Jordan.’ At the Baptism of the Lord in the water, that mystery was revealed to the world that was predicted in the Old Testament and fabled in ancient Egypt and India—the mystery of the Holy Trinity of God. The Father revealed Himself to the sense of hearing, the Spirit to the sense of sight and the Son, further beyond these, to the sense of touch. The Father gave His testimony of the Son, the Son was baptised in the waters and the Holy Spirit, in the form of a dove, hovered over the waters. And when John the Baptist bore witness of Christ and said: ‘Behold the Lamb of God, which taketh away the sin of the world’ (Jn. 1:29), and when he immersed the Lord in the Jordan and baptised Him, there were thus revealed both the mission of Christ in the world and the path of our salvation. That is to say: Christ takes upon Himself the sin of the whole human race. He dies under it (the immersion) and rises again (the coming up out of the water), and we must die to the old, sinful man and rise again, cleansed, renewed and re-born. Here is the Saviour and here is the way of salvation. The Feast of the Theophany is also called the Illuminating, for in the Jordan there is given to us an illumining, revealing God to us as Trinity, consubstantial and undivided. That is one thing. And the other is that each of us baptised in the water is illumined by the Father of lights, through the merits of the Son and in the power of the Holy Spirit. [4]

Archbishop Andrei’s emphasis on ‘the Manifestation of God’, the literal meaning of ‘Theophany’, and St Nicholas’s reference to the revelation of ‘the mystery of the Holy Trinity of God’ both get to the very heart of this feast as expressed in the festal Troparion:

When Thou, O Lord, wast baptized in the Jordan, the worship of the Trinity was made manifest. For the voice of the Father bore witness unto Thee, calling Thee the beloved Son, and the Spirit in the form of a dove confirmed His word as sure and steadfast. O Christ our God who hast appeared and enlightened the world, glory to Thee. [5]

Metropolitan Hierotheos of Nafpaktos comments on this understanding of the Feast as a revelation of the Trinity:

During Christ’s Baptism the Holy Trinity appeared. One of the purposes of the divine incarnation, as well as of the Baptism of Christ was the revelation of the Trinitarian God, that although God has one essence and nature, yet He is off three persons, Father, Son and Holy Spirit. So the voice of the Father is heard witnessing and giving assurance that He who is in the Jordan at that moment is His Son, while the Holy Spirit also appears ‘like a dove’, as a dove. [6]

Furthermore, as God Himself it is not Christ who is blessed by the waters of Baptism, but rather the waters are blessed by Him. For, as the Venerable Bede says, ‘He deigned to be washed in the waters of the Jordan although he was clean of all stains, so that he might sanctify the flowing of water for the washing away of the stains of all of our wicked deeds.’ [7] Richard Crashaw has treated this in one of his ‘Divine Epigrams’:

On the water of our Lord’s Baptism.

Each blest drop, on each blest limb,
Is washt itself, in washing him:
’Tis a Gem while it stays here,
While it falls hence ’tis a Tear. [8]

Similarly, Giles Fletcher says in some lines to accompany an engraving of Christ’s Baptism, ‘I see the water wa[s]hd by washing in’t.’ [9]

Indeed, many of the liturgical texts for the Feast emphasise the fear of the waters before Christ and speak of them ‘turning back’ before Him. Psalm 76:17 is used as a Prokeimenon verse in the Royal Hours on the Eve of the Feast: ‘The waters saw Thee, O God, the waters saw Thee and were afraid.’ [10] Similarly, Psalm 113:3 is used in the first Antiphon at the Liturgy for the Feast: ‘The sea saw it and fled: Jordan was driven back.’ [11] A number of the hymns comment and elabourate upon these verses, such as this sticheron in Tone 8 from the Great Blessing of the Waters: ‘Today the nature of the waters is sanctified, and the Jordan is parted in two; it holds back the stream of its own waters, seeing the Master wash Himself.’ [12] Lest this be thought a ‘mere’ poetic image, see this post by Fr Milovan Katanić giving testimony of a recurring miracle which repeats this response of the creation to its Creator.

For more theological, historical, and literary reflection on the significance of the Feast, see:

My post of last year, in which I discuss the ‘crushing of the heads of dragons’ motif

This homily of St John Chrysostom on the Theophany

This explanation of the blessing of homes by Fr David Moser

This documentary on ‘the true site of Jesus’s Baptism’

And this poem by the inimitable Fr Jonathan Tobias

In conclusion, here is Hymn IX on the Epiphany by St Ephraim the Syrian (from the NPNF series, here):

(Resp., Blessed is He Who came down, and sanctified water for the remission of the sins of the children of Adam!)

1. O John, who sawest the Spirit,—that abode on the head of the Son,—to show how the Head of the Highest—went down and was baptized—and came up to be Head on earth!—Children of the Spirit ye have thus become,—and Christ has become for you the Head:—ye also have become His members.

2. Consider and see how exalted ye are;—how instead of the river Jordan—ye have glorious Baptism, wherein is peace;—spreading her wings to shade your bodies.—In the wilderness John baptized:—in Her pure flood of Baptism,—purely are ye baptized therein.

3. Infants think when they see its glory,—that by its pomp its might is enhanced.—But it is the same, and within itself—is not divided.—But the might which never waxes less or greater—in us is little or again great;—and he in whom is great understanding,—great in him is Baptism.

4. A man’s knowledge, if it be exalted,—exalted also is his degree above his brethren;—and he whose faith is great,—so also is his promise;—and as is his wisdom, so also his crowning.—As is the light, which though it be all goodly—and equal all of it with itself,—yet goodlier is one eye than another.

5. Jesus mingled His might in the water:—put ye Him on my brethren as discerning men!—For there are that in the water merely—perceive that they are washed. With our body be our soul washed!—The manifest water let the body perceive,—and the soul the secret might;—that both to the manifest and to the secret ye may be made like!

6. How beautiful is Baptism—in the eye of the heart; come, let us gaze on it!—Like as by a seal ye have been moulded;—receive ye its image,—that nought may be lacking to us of our image!—For the sheep that are white of heart—gaze on the glory that is in the water:—in your souls reflect ye it!

7. Water is by nature as a mirror,—for one who in it examines himself.—Stir up thy soul, thou that discernest,—and be like unto it!—For it in its midst reflects thy image;—from it, on it, find an example;—gaze in it on Baptism,—and put on the beauty that is hidden therein!

8. What profits it him that hears—a voice and knows not its significance?—Whoso hears a voice and is devoid—of the understanding thereof,—his ear is filled but his soul is empty.—Lo! since the gift is abundant,—with discernment receive ye it.

9. Baptism that is with understanding—is the conjunction of two lights,—and rich are the fountains of its rays.—……—And the darkness that is on the mind departs,—and the soul beholds Him in beauty,—the hidden Christ of glory,—and grieves when the glory fails.

10. Baptism without understanding—is a treasure full yet empty;—since he that receives it is poor in it,—for he understands not—how great are its riches into which he enters and dwells.—For great is the gift within it,—though the mean man perceives not—that he is exalted even as it.

11. Open wide your minds and see, my brethren,—the secret column in the air, whose base is fixed from the midst of the water—unto the door of the Highest Place, like the ladder that Jacob saw.—Lo! by it came down the light unto Baptism,—and by it the soul goes up to Heaven,—that in one love we may be mingled.

12. Our Lord when he was baptized by John—sent forth twelve fountains;—and they issued forth and cleansed by their streams—the defilement of the peoples.—His worshippers are made white like His garments,—the garments in Tabor and the body in the water.—Instead of the garments the peoples are made white,—and have become for Him a clothing of glory.

13. From your garments learn, my brethren,—how your members should be kept.—For if the garment, which ever so many times—may be made clean,—is duly kept for the sake of its comeliness,—the body which has but one baptism—manifold more exceeding is the care of its keeping,—for manifold are its dangers.

14. Again the sun in a house that is strait,—is straitened therein though he be great:—but in a house that is goodly and large,—when he rises thereon—far and wide in it he spreads his rays;—and though the sun is one and the same in his nature,—in divers houses he undergoes changes:—Even so our Lord in divers men. [13]

[6] Metropolitan Hierotheos (Vlachos) of Nafpaktos, The Feasts of the Lord: An Introduction to the Twelve Feasts & Orthodox Christology, trans. Esther Williams (Levadia, Gr.: Birth of the Theotokos Monastery, 2003), p. 105.