The Lovecraft Effect and St Pachomius the Great 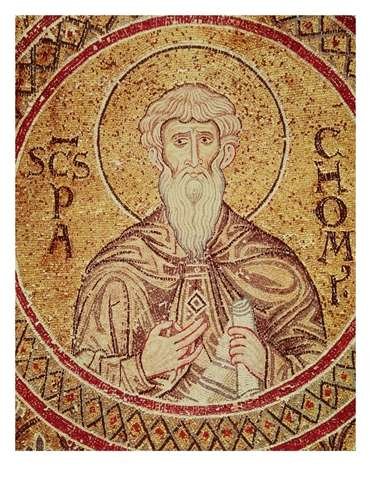 When I was maybe a sophomore in college, I worked at a little used bookstore in Oklahoma City. The owner would often let me take home enormous stacks of books for as little as five dollars. Among other things I wound up with there, were volumes 2 and 3 of Pachomian Koinonia, the exhaustive collection of documents associated with St Pachomius the Great and his monasteries edited by the Cistercian monk, Armand Veilleux (I made it a point later on to order volume 1).

Anyway, I knew these were important texts, but at the time I was so new to Orthodoxy and its spirituality and monasticism, that it was all a bit overwhelming. I basically put the books on the shelf and left them there.

I did recall, however, reading one passage after just sort of randomly flipping through volume 2. Among the ‘Paralipomena’ translated in that volume was the following exchange:

The great Pachomius was asked once by a brother, ‘Why is it that before the demon comes to trouble us, we possess our mind’s understanding in a healthy state and we philosophize about temperance, humility, and the other virtues, but when the hour comes to display in deed what we have been philosophizing about, such as longsuffering in the time of anger, absence of vainglory when subjected to praise, and many other similar things, we are often defeated?’ In answer to this the Great Man said, ‘Because we do not pursue the active life perfectly—that is why we do not understand all the demons’ mind and versatility well enough to be able, when the troubler manifests his presence, to repel swiftly the confusion of such thoughts which surrounds us by the contemplative power of the soul. Therefore,’ he said, ‘let us pour the fear of God like oil upon the contemplative part of the soul, every day and every hour. That fear, which accomplishes works and is a lamp for the contemplation of the things that concern us, makes our mind unshakable, not carried away by anger, wrath, rancor, and any of the other passions which lead us to wickedness. It makes it contemplative and raises it to that incorporeal region; it forces it to hold in contempt the things which are wrought by devils and prepares it to tread underfoot serpents and scorpions and all the whole strength of the enemy’ (Lk 10:19).

This made such an impression on me that I remember reading it out loud to a Protestant friend of mine to show him how cool Orthodoxy was. I even distinctly recall telling him, ‘I have no idea what he means when he says “let us pour the fear of God like oil upon the contemplative part of the soul”, but it’s obviously something very important.’ What I did not recall, however, was that I typed it up on the computer (most likely in Corel WordPerfect!), and printed it out in a font that I believe is called ‘Dauphin’ (although it may have other names as well). Apparently my mother saved this among various other scraps of paper I had produced, put it in a plastic sleeve, and stuck it in a three-ring binder.

Thus, two days ago, when I was looking through a few such binders for something else, I came across this saying of St Pachomius that I had not seen in perhaps 10 or 11 years. And this is when the story begins to resemble my rereading of Lovecraft, because I’ve read a lot of other stuff in those 10 or 11 years (including most of vol. 1 of the Pachomian documents, all of the Philokalia in English, and many assorted primary and secondary sources on the Desert Fathers). Consequently, when I read these words 2 days ago, a couple of clues suggested themselves to me, and I now have some idea of what St Pachomius meant.

First of all, ‘the contemplative part of the soul’, one of the original mysteries for me in this passage, is clearly the nous, ‘the organ of contemplation [theoria]’ (see the entry for ‘intellect’ in the ‘Glossary’ in the back of each volume of the English Philokalia), or the logikon or logistikon, ‘the ruling aspect’ of the nous (see the ‘Glossary’ entry for ‘intelligence’).

Second, the repelling of thoughts, the repetition of the action ‘every day and every hour’, and the stillness of mind and dispassion, even the attainment of contemplation and the ‘incorporeal region’, promised as a fruit of this action, are all things that I now associate with the practice of the Jesus Prayer (not, of course, because of my own experience in this practice, but as a result of my reading). Consider, for example, the following passage from St Hesychios’s treatise ‘On Watchfulness and Holiness’:

28. It is impossible to find the Red Sea among the stars or to walk this earth without breathing air; so too it is impossible to cleanse our heart from impassioned thoughts and to expel its spiritual enemies without the frequent invocation of Jesus Christ.

29. Be watchful as you travel each day the narrow but joyous and exhilarating road of the mind, keeping your attention humbly in your heart, reproaching yourself, ready to rebut your enemies, thinking of your death and invoking Jesus Christ. You will then attain a vision [theoria] of the Holy of Holies and be illumined by Christ with deep mysteries.

Third, the interesting statement that the fear of God ‘accomplishes works’ also has its analogue in discussions of the Jesus Prayer. In his Monastic Rule, St Nil Sorsky writes, ‘For although there are many good exercises, the good of the others is partial; the prayer of the heart is the source of all good, which refreshes the soul as if it were a garden, according to Gregory of Sinai’ (St Nilus Sorsky, ‘The Monastic Rule’, trans. Helen Iswolsky, A Treasury of Russian Spirituality, ed. George P. Fedotov [Vaduz: Büchervertriebsanstalt, 1988], p. 62).

Finally, even the ‘fear of God’ is often mentioned in connection with the Jesus Prayer. According to St Ignatius (Brianchaninov), ‘all Christians can and should practice the Prayer of Jesus for the purpose of repenting and calling upon the Lord for help, with faith and the fear of God’; and also, ‘To him who prays constantly with contrition of spirit, with the fear of God and with attention, God Himself gives gradual progress in prayer’ (On the Prayer of Jesus, trans. Archim. Lazarus [Moore] [Boston: New Seeds, 2006], pp. 39, 66).

Now, I shall not insist that St Pachomius was speaking specifically of the Jesus Prayer itself. It is not clear that all of the monastics in Egypt were already employing that particular formula in the fourth century (St Pachomius lived from 292-346 AD according to William Harmless, and what harm can there be in following his authority?—see Desert Christians: An Introduction to the Literature of Early Monasticism [Oxford: Oxford U, 2004], p. 115). Even so, I firmly believe that he is speaking of prayer of the heart, which can be practiced with or without the Jesus Prayer. Although I don’t recall him referring to prayer in the heart in so many words, Douglas Burton-Christie has written a fascinating treatment of the Desert Fathers’ use of passages from the Scriptures essentially for just this purpose in his wonderful book, The Word in the Desert: Scripture and the Quest for Holiness in Early Christian Monasticism (Oxford: Oxford U, 1993), pp. 122-9 (the editor of the Pachomian Koinonia himself, Armand Veilleux, has an interesting lecture on this subject as well). Furthermore, St John Cassian (my own new monastic patron as an oblate novice) provides the clearest possible illustration of this practice in his Tenth Conference: On Prayer, X-XIV, when Abba Isaac prescribes the use of Psalm 69:1 (LXX) as a formula for the achievement of prayer of the heart (St John Cassian, The Conferences, trans. Boniface Ramsey [NY: Newman, 1997], pp. 378-87).

So I hope I’m not being too presumptuous in saying that I now have some idea of what St Pachomius meant. It’s another interesting example of how one’s subsequent reading changes one’s perception and understanding of other texts over time. When I reread this saying of St Pachomius, I felt I instantly ‘got it’ this time, as his language now carried all of the rich suggestions of similar language used in many other books.
Posted by Aaron Taylor at 12:09 PM