Scripture, Creation, & the Mystery of the Incarnation 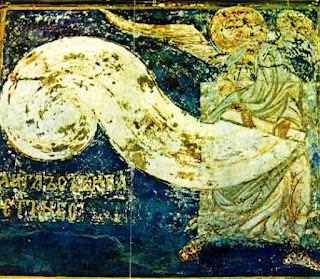 Sometime this last week I was reading some more of James Taylor’s Poetic Knowledge, when I came across a passage that, as usual, reminded me of some other things I’d read. At the time I just made a mental note and went on. Then today, I was back in Reflections of a Humble Heart (it’s a tiny, short book, but I’m reading it very slowly), and found something very similar. I thought the time had come for a post. First, Taylor quotes John Senior:

To learn to ‘read’ by first learning to listen to the voice in the book of nature, which includes our own human nature, was the first task of the monk, as a prerequisite for taking up later the book of Scripture, which often contains both ‘voices’ as in Psalm 18. The clear connection is still with us here, echoing what St Augustine said, that one cannot really read and know the words—the signs of things—without first a knowledge of the things themselves, which we must come to love. [2] The pre-Christian audience of the Homeric and Virgilian epics and the unlettered peasants of the Christian, premodern world could never have grasped, as they did, the spiritual dimensions of the poets in the first case and the supernatural teaching of the apostles and disciples in the second, had they not already read deeply first in the book of nature. [3]

All of this got me thinking along several different lines, but there was one in particular that my reading of Reflections today highlighted—the ‘two Books’. At one point, the elder in Reflections reminds the brothers to whom he is speaking of the words of another elder: ‘My children, God gave us two sacred books that always direct us to salvation: The Holy Gospel—this Book of books that reveals everything to us—and the vault of heaven, which, like some enormous and open book, teaches us about God.’ [4]

Of course, while he is speaking specifically of the sky, and not of the general creation in this particular passage, what the elder says here about the two Books is very closely akin to Senior’s and Taylor’s observations above. It also reflects an ancient patristic tradition. I’m sure examples could be multiplied ad nauseam, but there are two I particularly like, one of which I was just discussing Sunday evening with a student I’m tutoring, and the other which I found after a short perusal through the second volume of the Philokalia (St Maximus’s volume).

The first example is rather difficult to put together, but to me it suggests an essential connection between the two Books. In his Oration 28, the 2nd Theological Oration, St Gregory the Theologian is talking about how some ‘corporeal factor of ours will always intrude itself’ in our knowledge of God. Then he writes:

‘Spirit’, ‘fire’, and ‘light’, ‘love’, ‘wisdom’, and ‘righteousness’, ‘mind’, and ‘reason’ and so forth, are titles of the prime reality, are they not?...How can the simple, unpicturable reality be all these images and each in its entirety?...Because though every thinking being longs for God, the First Cause, it is powerless, for the reasons I have given, to grasp him....Either it looks at things visible and makes of these a god—a gross mistake, for what visible thing is more sublime, more godlike, than its observer, and how more so, that it should be the object, he the subject of worship?—or else it discovers God through the beauty and order of things seen, using sight as a guide to what transcends sight without losing God through the grandeur of what it sees. [5]

The ‘titles of the prime reality’ listed at the beginning of this passage are all of course Scriptural descriptions of God—what St Dionysius the Areopagite calls ‘divine names’—and Lionel Wickham has each one footnoted with a book, chapter, and verse in his translation. In other words, these titles are taken from the first of our two Books, the Book of Scripture. But note that the point of this passage, perhaps more difficult to discern because of the lines I have omitted due to length considerations, is that each of these titles carries inescapably ‘natural’ connotations for us. In other words, they are not ‘sheerly incorporeal’ in human experience. So, while they are taken from the Book of Scripture, that Book got them from the other Book, the Book of Nature.

This becomes clear in the last sentence of the quoted passage. St Gregory is saying that, like natural forces or material things, these terms can become a temptation to idolatry if we take them too literally, if we stop at their surface. [6] We must read them anagogically, lifting our understanding up to what transcends all created things. But the way that St Gregory describes this anagogy links the Scriptural titles firmly with their source in creation, when he says that thinking beings should discover ‘God through the beauty and order of things seen, using sight as a guide to what transcends sight without losing God through the grandeur of what it sees’.

This is almost a classic statement of natural theology. Compare St Paul in Romans 1:20—‘Ever since the creation of the world His invisible nature, namely, His eternal power and deity, has been clearly perceived in the things that have been made’—or the Prophet Solomon in Wisdom 13:5—‘For from the greatness and beauty of created things comes a corresponding perception of their Creator.’ Just as we read Scripture anagogically, lifting our minds from the corporeal words to the Logos incarnate in them, so we ‘read’ creation itself, using our senses—in the words of St Theodore the Great Ascetic—‘in order to grasp the Creator through His creation, seeing Him reflected in created things as the sun is reflected in water, since in their inner beings they are in varying degrees images of the primal cause of all.’ [7]

Of course, this leads directly to the second quote I found today after reading the above passage in Reflections and then rummaging around in my patristics stuff. It will seem beyond obvious now, but in the ‘First Century on Theology’ St Maximus writes, ‘The mystery of the incarnation of the Logos is the key to all the arcane symbolism and typology in the Scriptures, and in addition gives us knowledge of created things, both visible and intelligible.’ [8] So, the key to interpreting the two Books is the same—the mystery of the incarnation of the Logos. We read the heavens through the regula fidei just as surely as we read Holy Scripture through the same rule. In the words of the anonymous elder quoted by another anonymous elder in Reflections, what we find there via such a hermeneutic is the love of God made manifest in the sending of His only Son into the world (I John 4:9):


In the nocturnal hours these [the pages of the Book of Creation opened up in the heavens] are pages of black parchment with silver lettering, instructing us concerning the eternity and mysteriousness of the life to come. In the daylight hours these are pages of light blue parchment inscribed with the gold and crimson of the rising and setting sun and the whiteness of the clouds. These inscriptions teach you about God’s goodness towards you, for not only has God given you all this beauty for your delight, but He also covers you with His Providence and His love. And so, the night sky speaks to you about the almightiness and inscrutability of the Creator, while the daytime sky speaks to you about the love and goodness that your Heavenly Father has for you. [9]

Postscript: As I mentioned my thinking being spurred along several different lines, I may have to revisit the initial quotations and write some follow-up posts in the near future, if I have time.

[2] Referring to St Augustine, ‘The Teacher’, Ancient Christian Writers No. 9 (Westminster, MD: Newman, 1964), p. 185. I don't have a copy of this or any other edition of 'The Teacher' here, so I merely give the citation as it is found in Taylor.

[3] Taylor, p. 37. Note that Taylor, following his professor, John Senior, is implying a strong pessimism about the ability of moderns—not having read so ‘deeply in the book of nature’—to grasp such ‘spiritual dimensions’ and ‘supernatural teaching’ to the same degree that premoderns did. This would be a good topic for a future post. Suffice to say that I completely share their pessimism, and I regard everything that the Fathers say in what follows as very nearly beyond our reach for this reason.

[6] Cf. St Maximus the Confessor’s comment in the ‘Second Century on Theology’ 73, in The Philokalia: The Complete Text, Vol. 2, tr. G.E.H. Palmer, et al. (London: Faber, 1990): So long as we only see the Logos of God as embodied multifariously in symbols in the letter of Holy Scripture, we have not yet achieved spiritual insight into the incorporeal, simple, single and unique Father as He exists in the incorporeal, simple, single and unique Son, according to the saying, ‘He who has seen Me has seen the Father...and I am in the Father and the Father in Me’ (John 14:9-10). (p. 155) Witness, also, the anthropomorphite heresy described by St John Cassian in Conference 10.