'Can You Describe This?'—Akhmatova on Stalin's Terror 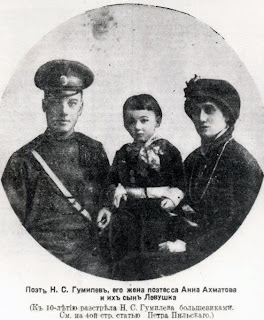 I dedicate this
to all those who did not live
to tell it.
And may they please forgive me
for not having seen it all
nor remembered it all,
for not having divined all of it.

Re-reading this now, I am reminded of the ‘Instead of a Preface’ to Anna Akhmatova’s lament for Stalin’s victims, ‘Requiem’ (Anna Akhmatova, Poems of Akhmatova, ed. and trans. Stanley Kunitz with Max Hayward [Boston: Mariner, 1973], p. 99):

In the terrible years of the Yezhov terror [1937-8] I spent seventeen months waiting in line outside the prison in Leningrad. One day somebody in the crowd identified me. Standing behind me was a woman, with lips blue from the cold, who had, of course, never heard me called by name before. Now she started out of the torpor common to us all and asked me in a whisper (everyone whispered there):

‘Can you describe this?’

Then something like a smile passed fleetingly over what had once been her face.

I recalled this passage, inexplicably, in church the other day, causing tears to fall immediately from my eyes. The entire poem is quite powerful.

And with Akhmatova, if you’d never heard anything about Christianity, then you found out about it from her, by associating with her. This was a human influence more than anything else. You understand that you’re dealing with homo sapiens, that is, not so much with ‘sapiens’ as with ‘dei’.

Leonard Stanton speculates that Akhmatova may have visited St Nektary of Optina in 1925 or 1926 (The Optina Pustyn Monastery in the Russian Literary Imagination: Iconic Vision in Works by Dostoevsky, Gogol, Tolstoy, and Others [NY: Peter Lang, 1995], p. 254). The photo above shows a young Akhmatova c. 1914 with her husband, Nikolai Gumilev, and son, Lev, who was imprisoned in 1935. The latter spent nearly twenty years, except for a stint fighting in WWII, in and out of prison, and much of 'Requiem' describes Akhmatova's fear and anguish for him.
Posted by Aaron Taylor at 1:48 PM