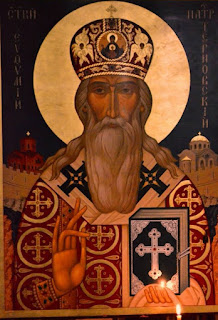 On the 20th day of the month of January, along with St Euthymius the Great, who laboured in Palestine, and several other Ss Euthymius as well, we commemorate St Euthymius of Tŭrnovo, Patriarch of the Bulgarians († c. 1402). Fr Georges Florovsky calls him ‘a monk and spokesman for Hesychasm’ as well as ‘a scholar and linguist’, writing, ‘His translations of liturgical and canonical texts into Old Slavonic (an Ustav of the Liturgy of John Chrysostom and a Sluzhebnik which corrected and brought uniformity to liturgical texts) sparked the late medieval Slavonic renaissance’ (Ways of Russian Theology, Part I, trans. Robert L. Nichols, Vol. 5 in The Collected Works of George Florovsky [Belmont, MA: Nordland, 1979], p. 275, n. 37).

Born to a noble family in the third decade of the 14th c., St Euthymius was made a monk when he was still quite young, becoming the spiritual child of the great Bulgarian hesychast, St Theodosius of Tŭrnovo, who in turn had been a disciple of St Gregory of Sinai. In Thomas Butler’s words, ‘Theodosius imparted to Euthemius the essence of Gregory’s teachings regarding the use of the “Jesus Prayer” in meditation, the guarding of the mind during long vigil, and other paths to attain what the Greeks called hesychia or “quietude” (Slavonic bezmlŭvie)’ (Monumenta Bulgarica: A Bilingual Anthology of Bulgarian Texts from the 9th to the 19th Centuries, ed. and trans. Thomas Butler [Ann Arbor, MI: Michigan Slavic, 2004], p. 239).

In fact, the young monk advanced so greatly that his elder soon made him abbot of the monastery of Kilifarevo, while St Theodosius himself retired to a cell outside of the monastery. In about 1363, St Kallistos, the Patriarch of Constantinople, invited St Theodosius to the imperial city, and the latter took with him St Euthymius and St Cyprian, future Metropolitan of Kiev. According to St Kallistos, the two junior monks ‘studied carefully and diligently the divine rules and laws’ while they were in the city (qtd. in Butler, p. 239), and it seems they thoroughly absorbed the Greek language at that time if they had not already done so. St Euthymius stayed for a time at the Studion Monastery, where ‘he undoubtedly made use of the monastery’s extensive library and observed the operations of its scriptorium’ (Butler, p. 240).

In 1364, the great elder, St Theodosius, fell asleep in the Lord, and St Kallistos became the first to write his Life. Upon the death of their elder, Ss Euthymius and Cyprian went to the Great Lavra on the Holy Mountain, where there was a highly active group of translators from Greek into Slavonic that included Elder Joseph, the translator of the Slavonic Triodion (Butler, p. 240). Anthony-Emil Tachiaos writes of these monks, and their counterparts throughout the Balkans, ‘These were men of a high spiritual and cultural level who, having gone beyond the limits of a broad general education, plunged into the prevailing theological and ideological currents in Byzantine society’ (Cyril and Methodius of Thessalonica: The Acculturation of the Slavs [Crestwood, NY: St Vladimir’s Seminary, 2001], p. 139). On the Holy Mountain, among such men, Ss Euthymius and Cyprian were more fully initiated into various aspects of the hesychastic literary movement: the rediscovery of Greek patristic texts, the close adherence to Greek terminology and syntax in translation, the attention to orthography, and the use in original Slavonic compositions of an ornate literary style known as pletenie sloves, or ‘word-weaving’. On these literary qualities of hesychasm, Tachiaos cites one source in English, which I have yet to read—H. Goldblatt, Orthography and Orthodoxy: Constantine Kostenečki’s Treatise on the Letters, Studia Historica et Philologica, 16 (Florence, 1987) (Anthony-Emil N. Tachiaos, Introduction, The Life of Paisij Velyčkovs’kyj, by St Paisius [Velichkovsky], trans. J.M.E. Featherstone [Cambridge, MA: Ukrainian Research Institute of Harvard University, 1989], p. xxix, n. 36). Here, however, is Butler’s characterisation of the effect:

The convoluted word order, the uninhibited stringing together of synonyms, and the idiosyncratic juxtaposition of words for acoustical effect and cadence often present the reader with a kind of ‘monkish’ test or trial. In this meditative blurring of syntactic boundaries, words become rigid, refuse to meld, assume a numinous quality, suggesting that for the hesychast they are icons, whose array provides an esoteric meaning other than the usual one conveyed by grammar and syntax. (p. 266)


Upon returning to Bulgaria in about 1371, St Euthymius almost immediately went to work establishing a school at Holy Trinity Monastery in Tŭrnovo in order to train new translators and writers, a project he continued even after being consecrated Patriarch of Bulgaria in 1375 (Butler, p. 241). All of this had, of course, a profound effect on Slavic letters, not just in Bulgaria but throughout the Slavic world. Fr Florovsky observes:

One notes a sizeable quantity of manuscripts and books in Russian monastic libraries which date back precisely to this period. More importantly, these new writings form a fresh new stream. This time their content was mystical and ascetical, but once again they constituted a complete literature. Indeed, this new translation activity on Mt Athos and in Bulgaria stems from the Hesychast movement with its deeply contemplative spirit and approach. These translations made the works of the ascetical Fathers known in Slavic literature. (p. 10)


Sadly, the mediæval Bulgarian kingdom that had nutured and sheltered this work came to a violent end during St Euthymius’s patriarchate. In 1393 the Turks attacked Tŭrnovo, and St Euthymius urged the citizens to fight the invading Muslim army. In the end the city was sacked, the nobility and clergy were executed, and many were sent into exile, including the Patriarch himself, who settled in Bačkovo Monastery until his death. Butler writes, ‘He died there in 1401 or 1402 AD, having lived a full and exemplary life’ (p. 241).

St Euthymius translated the Sluzhebnik, wrote an Akolouthia for St Theophano, wrote the Lives of Ss Paraskevi, Philothei, Hilary of Moglen, and John of Rila. as well as Eulogies to Ss Constantine and Helen, Nedelja, John of Polybotum, and Michael of Potuka, and wrote numerous letters, of which we still have a few: to St Cyprian, to Metropolitan Antim of Wallachia, and to St Nicodemus of Tismana (Butler, pp. 242-3). St Euthymius’s most prominent disciple, Metropolitan Gregory (Camblak) of Kiev, has written a moving ‘Eulogy’ for his elder which is still the primary source of biographical information on the Saint. Here is the beginning:

If Aaron, ancient priest within the shade of the Law, through the sacrifice of the dumb /animals/, and through sprinkling the profaned with the blood of young oxen and goats and the ashes of heifers, sanctified them for bodily purification and thereby earned himself a memorial appropriate for one of God’s servants, so that the prophet /David/ always mentions him in the temple, as he says in the Book of Psalms: ‘Moses and Aaron among his priests’ and again: ‘He sent Moses, his slave, and Aaron whom he chose for himself’, and again: ‘He led his people out like sheep, through the hands of Moses and Aaron’—is not Euthemius far more worthy of praise, who was the celebrant of unfathomed mysteries and sharer of the apostolic glory, a priest of that great sacrifice and teacher of that truth which angels wish to fathom and which, furthermore, he kept pure and passed on undefiled, and finally a priest who by various sufferings offered himself as a holy sacrifice pleasing to the Lord?

But what sort of worldly praises shall we offer one who, while eloquent in the perfected word, was teaching lovers of the word to celebrate virtue with silence instead of the word? Who transcended the limits of nature itself? Who, totally enraptured by the contemplation of the divine, maintained that life was not in the body but in the language of the divine? And about whom the Psalmist, as he was weaving a homily, was saying: ‘My tongue is the quill of the fastwriting scribe’ (Ps
44:1)?

I appreciate your sharing the descriptions of word order and use and the effects they can have.

The last paragraph demonstrates to me the message of Fr. McGuckin's podcast on St. Gregory the Theologian. He said something to the effect that a refined mind can ascend greater heights even in silence.

For some reason, my e-mail notification of this comment was sent to my spam folder, and I only just now read it! I think this stuff about hesychastic orthography, language, and word-weaving is absolutely fascinating and I would love to study it in more depth. I did a little paper on mystical language in college, but that was some time ago now! I haven't heard the podcast you mention (actually I can count the number of podcasts I have heard on one hand!), but it sounds interesting.

Where you Orthodox when you wrote it? I'd probably still find it interesting anyway. If you don't want to or can't share it, maybe you could find some new stuff on it for a future post.

I was indeed Orthodox, but only just (maybe three years?). I was very caught up in some sort of attempt to describe aspects of the faith in highly 'intellectual' terms drawn from Russian and continental philosophy, but I had very little acquaintance with the basic texts of Orthodoxy: the Lives of Saints, ascetic writings, hymnography, etc. Anyway, I'll look for it and see what I think, but I might have a tough time tracking it down! Perhaps I could give you a taste by posting a quotation that sort of formed the whole thesis of the paper.