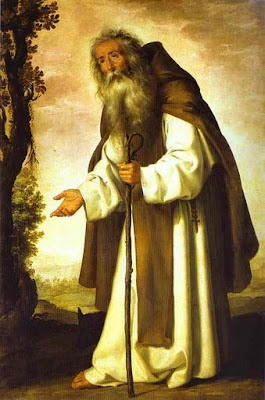 I’ve found some materials on two of the most extreme ascetics who are on the Church’s calendar today, 24 January: Venerable Macedonius, hermit of Syria (420), and St Lupicinus of Lipidiaco in Gaul (500). The first was known as ‘the Barley-eater’ because he only ate ground and moistened barley (until infirmity forced him to eat bread) (see Bulgakov’s Menaion), and he would live in mountain-top caves. he is described by Theodoret of Cyrrhus as exceedingly innocent and simple, a testimony based on personal experience, for St Macedonius had brought about the conception of Theodoret by his intercessions, and the latter ‘often enjoyed his blessing and teaching’ (A History of the Monks of Syria, trans. R.M. Price [Kalamazoo, MI: Cistercian, 1985], p. 107). St Macedonius told the young man:

You were born, my child, with much toil: I spent many nights begging this alone of God, that your parents should earn the name they received after your birth. So live a life worthy of this toil. Before you were born, you were offered up in promise. Offerings to God are revered by all, and are not to be touched by the multitude: so it is fitting that you do not admit the base impulses of the soul, but perform, speak, and desire those things alone that serve God, the giver of the laws of virtue. (p. 107)

My favourite story about the Venerable Macedonius however, is quite reminiscent of similar stories about other anchorites. He was discovered by a hunter, a general with his soldiers, who asked him what he was doing there. The Venerable one asked him in turn, ‘What have you come here to do?’ The general told St Macedonius he was hunting. The latter replied, ‘I too am hunting my God. I yearn to catch him, I long to behold him, and I shall not give up this noble hunt’ (p. 102).

The other ascetic I planned to mention is St Lupicinus of Lipidiaco, Gaul († 500), who should not be confused with St Lupicinus of Condat, co-struggler of St Romanus. The former shut himself up in a small hermitage in Lipidiaco (modern Dompierre-sur-Besbre) with only a little window for bread and water, where he spent ‘day and night singing psalms in praise of God’ (St Gregory of Tours, Vita Patrum: The Life of the Fathers, trans. Hieromonk Seraphim [Rose] [Platina, CA: St Herman of Alaska, 1988], p. 246). In his ascetic zeal, St Lupicinus tied a very large stone around his neck. In this way, his health was eventually ruined,—

But very often during the night, devout men would draw near his cell secretly, and there heard as if there were many voices of several persons who were singing psalms, and many of the infirm—and especially those tormented by fever of foul pustules—were healed simply by having been touched by his hand or by having received his blessing with the saving sign of the cross. (St Gregory, p. 246)

The Venerable Lupicinus fell asleep in the Lord on 24 January 500.

(The painting above is F. de Zurbaran’s painting of St Anthony, 1598. As I couldn’t find icons for either of these Saints, I thought it would be a good stand-in, generic hermit.)
Posted by Aaron Taylor at 12:50 AM