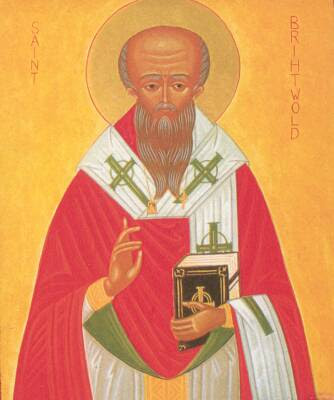 Today, 22 January on the Orthodox calendar, we commemorate St Brihtwold (Brithwald) of Wilton (c. 975-1045). He was a Benedictine monk at the legendary Abbey of Glastonbury, in Somersetshire. John of Glastonbury calls him ‘a monk of venerable religion’ (James P. Carley, The Chronicle of Glastonbury Abbey: An Edition, Translation, and Study of John of Glastonbury’s Cronica sive Antiquitates Glastoniensis Ecclesie, ed. James P. Carley, trans. David Townsend [Rochester, NY: Boydell, 2009], p. 151). In 1005, St Brihtwold was consecrated as the Bishop of Ramsbury, where he served faithfully for forty years. According to F. Vere Hodge ‘he seems to have felt cut off from the monastic life, and probably went back to Glastonbury when he could’ (Glastonbury Gleanings [Norwich: Canterbury, 1991], p. 24). John of Glastonbury painstakingly details St Brihtwold’s numerous gifts to the monastery during his episcopacy, of which the most interesting perhaps are three shrines, for Ss Guthlac, George, and Oswald, inscribed with the following verses (Hodge, p. 25):

The humble priest, Brihtwold by name,
To the Highest Lord and His mother Mary,
Grants this small gift with a devout heart,
Committing it to the old church of Glastonbury
So that he may win the sweet delights of eternal life.

St Brihtwold is perhaps best remembered, however, for his prophetic gifts, having famously prophesied about St Edward the Confessor. John of Glastonbury tells the story as follows:

Once, in the time of King Cnut [1016 – 1035], this man [St Brihtwold] spent the night awake in heavenly vigils, contemplating the royal stock of the English, which was then almost obliterated. As he meditated, sleep crept upon him, and behold, he was carried up to the heights and saw Peter, the prince of the apostles, consecrating St Edward as king (Edward was the son of Æthelred, who was father of Edmund Ironside; he was then an exile in Normandy); he saw Peter reveal Edward’s sanctity by the number of the twenty-three years for which he would reign. And when the monk asked about Edward’s posterity and the kingdom’s succession, Peter responded, ‘The kingdom of the English is God’s kingdom; after Edward God will provide a king according to his own will.’ (p. 151)

St Brihtwold fell asleep in the Lord in 1045 and was buried in the monastery of his repentance.
Posted by Aaron Taylor at 11:57 PM

Perhaps you should add, "extremely long-lived" in there somewhere: