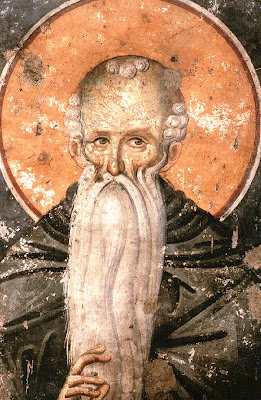 Around the year 377 AD in the Armenian city of Melitene near the Euphrates, two ‘noble and distinguished persons’ (in St Nicholas’s words), Paul and Dionysia, had been entreating God for a child. One night they heard a divine voice say, ‘Be confident, be confident; for behold, God has granted you a child who will bear the name of confidence (euthymia), since at his birth he who grants you him will give confidence to his churches.’ The child was born ‘in the month of August in the fourth consulship of Gratian’, and from that moment he was called ‘Euthymius’ and was dedicated to God by his parents (Cyril of Scythopolis, The Lives of the Monks of Palestine, trans. R.M. Price [Kalamazoo, MI: Cistercian, 1991], pp. 4-5). An immediate predecessor of Ss Sabas (St Euthymius’s disciple) and Theodosius (a disciple of his disciples), Derwas Chitty says of St Euthymius:

He is the real effective founder of that Judaean monasticism which for the next four crucial centuries was to be the primary formative influence in East Christian monastic order, and to play a leading part also in the development of liturgy, hymnody, and dogma. Generally unknown in the West, he is placed in the Byzantine hymns of the Ascetics second only to St Antony. (The Desert a City: An Introduction to the Study of Egyptian and Palestinian Monasticism under the Christian Empire [Crestwood, NY: St Vladimir’s Seminary, 1995], p. 97)

St Euthymius was baptised by Bishop Otreius of Melitene (a correspondent of St Basil) and under his supervision was raised and ‘carefully educated in secular culture as well as in Sacred Scripture. . . . In a short time Euthymius had surpassed a great many of his contemporaries in the soul’s love of God and love of learning; for he showed a keenness beyond his age’, causing amazement ‘at his inspired mental grasp’ (Cyril, pp. 6-7). Tonsured a reader at an extremely young age, he grew up daily participating in the divine services of the Church ‘with undistracted heart and unwavering mind . . . with fear and compunction’ (Cyril, pp. 7-8). Besides this, he was a frequenter of monasteries and spent his time at home ‘in prayer, psalmody and reading the divine sayings all day and all night’ (Cyril, p. 8).

When he was at last ordained a priest, however, and given charge over the monasteries near Melitene, St Euthymius, ‘ever of an austere character seeking retirement and solitude’ (Chitty, p. 82), fled to Jerusalem in the year 405 and settled in a hermitage near the Lavra of St Chariton (which now belongs to the Russian Ecclesiastical Mission under ROCOR). Of his time there, Cyril writes:

Freeing himself from every earthly care he had as his one sole aim how to please God through prayer and fasting. In his concern for every virtue he cut off the thorns of the passions at the root, like a good cultivator, ‘clearing away thoughts and every high thing raised up against the knowledge of God’ (2 Cor 10:5), and fulfilling the prophetic saying that runs, ‘Break up your fallow ground and do not scatter seed on thorns’ (Jer 4:3). (Cyril, pp. 9-10)

Chitty points out that a habit of St Euthymius’s from his days in Melitene (reported by Cyril on p. 9)—his custom of departing for greater solitude after the Feast of the Theopany, only to return for Palm Sunday—‘was to have considerable influence on the future of Judaean monasticism’ (Chitty, p. 82). This was in part simply because it became so widely imitated, but also in that it determined the location of various important monasteries. St Euthymius’s first was founded in a remote gorge while on one of these Lenten retreats with his co-struggler, St Theoctistus, when other monks decided to join them there. Fleeing again into solitude in a cave, however, the venerable Euthymius soon founded another monastery 3 miles from the first, when he was ordered by God to accept three Cappadocian postulants, ‘since God has sent them’, and to stop sending the others to St Theoctistus at the previous monastery (Cyril, p. 21). Meanwhile, he had also established a third monastery halfway between these for a tribe of Arabs he had converted to the Christian faith.

As can be seen, St Euthymius exerted an enormous influence during his lifetime. His co-struggler was St Theoctistus, who acted as abbot of St Euthymius’s first monastery; his Arab convert, ‘Peter’ in baptism, was active in the Third Œcumenical Council, at Ephesus in 431; his immediate disciple was St Sabbas the Sanctified, whose monastery became a centre of Orthodox liturgy; St Euthymius acted as an Elder to St Cyriacus the Hermit; two of his disciples were the Elders Marinus and Luke, who trained St Theodosius the Cœnobiarch when he came to that region shortly after the death of St Euthymius. When he departed this life,—

on 20 January of the eleventh indiction, in the year 5965 since the creation of the world, from when time began to be measured by the course of the sun, and in the year 465 since the Word of God became man from the Virgin and was born in the flesh, according to the chronologies composed by the holy fathers Hippolytus the Ancient, disciple of the Apostles, Epiphanius of Cyprus, and Hero the philosopher and confessor (Cyril, p. 56)

—the news ‘brought together an immense crowd of monks and laypeople’, including Patriarch Anastasius of Jerusalem, who arranged for the building of a tomb in the cave where St Euthymius had struggled (Cyril, p. 57). Indeed, through its many tales of miracles performed after the venerable Father’s blessed repose, ‘The rest of Cyril of Scythopolis’ Life of the saint makes it abundantly clear how Euthymius continued to reign from his tomb over the wilderness’ (Chitty, p. 97). In his final testament to his monks, St Euthymius said:

My beloved brethren, I myself am setting out on the path of my fathers; you yourselves, if you love me, must keep these commandments. In all things aim at pure love, the source and goal of every good work and ‘the bond of perfection’ (Col 3:14). Just as it is not done to eat bread without salt, so it is impossible to achieve virtue without love. For each virtue is made secure through love and humility, with the aid of experience, time, and grace. While humility exalts to a height, love prevents falling from this height, since ‘he who humbles himself will be exalted’ (Lk 18:14) and ‘love never fails’ (1 Co 13:8). Love is greater than humility, for it was on account of love for us that God the Word humbled himself to become like us. Therefore we ought to confess him from our hearts and address him with hymns and thanksgivings without ceasing, specially we ourselves who are separate from the manifold affairs of this life, not only because of our pledges to him but also by reason of the undistracted life we lead, freed as we are from the confusion of the world. Therefore let us make every effort to offer up to him purity of soul, chastity of body, and pure love. (pp. 54-5)