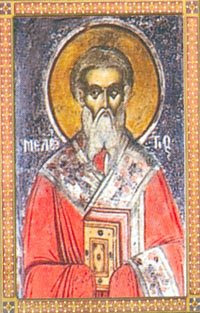 Today, 12 February on the Church’s calendar, we commemorate St Meletius, archbishop of Antioch (381). One can read a brief summary of his life here. In this post, I would just like to point out a few telling details.

First, the old Catholic Encyclopedia article on St Meletius is particularly good. Here is an excerpt focusing on his more personal qualities amidst all of the activity and controversy that whirled about him during the theologically and ecclesiastically tumultuous fourth century:

The qualities of Meletius were genuine; a simple life, pure morals, sincere piety and affable manners. He had no transcendent merit, unless the even harmonious balance of his Christian virtues might appear transcendent. The new bishop held the affection of the large and turbulent population he governed, and was esteemed by such men as St John Chrysostom, St Gregory Nazianzen, St Gregory of Nyssa, St Basil, and even his adversary St Epiphanius. St Gregory Nazianzen tells us that he was a very pious man, simple and without guile, full of godliness; peace shone on his countenance, and those who saw him trusted and respected him. He was what he was called, and his Greek name revealed it, for there was honey in his disposition as well as his name.

Tragically, this simple and guileless man was to endure years of tribulations, slanders, condemnations, and exiles, being attacked and condemned not only by the heretics, but also by Orthodox Fathers who did not recognise the justness of his position. Concerning the above-referenced ‘adversarial’ stance of St Epiphanius for instance, St Basil the Great, who was ordained to the diaconate by St Meletius (The Lives of the Three Hierarchs, comp. and trans. Holy Apostles Convent [Buena Vista, CO: Holy Apostles Convent, 1998], p. 9), writes to the famous Cypriot bishop in the following glowing terms:

The right reverend bishop Meletius was the first to speak boldly for the truth, and fought that good fight in the days of Constantine. Therefore my Church has felt strong affection towards him, for the sake of that brave and firm stand, and has held communion with him. I, therefore, by God’s grace, have held him to be in communion up to this time; and, if God will, I shall continue to do so.

St Meletius was also the recipient of a number of rather warm letters from St Basil (for instance, LVII, LXXXIX, CXX, CXXIX, CCXVI). Furthermore, aside from his rôle in St Basil’s life, it has been noted concerning St Meletius that ‘the personal appeal and bearing of this cordial bishop certainly gave impetus to [the young St] John [Chrysostom]’s ultimate choice for the life in the Church’ (Lives, p.125).

Having been ‘received with marked deference’ (CE) by the Emperor Theodosius at the Second Œcumenical Council in Constantinople, made president of the assembly, and given the opportunity to enthrone St Gregory the Theologian as the new bishop of the imperial city, St Meletius fell asleep in the Lord in 381 while the council was still in session. He was mourned greatly, and St Gregory of Nyssa has left us with a particularly moving Eulogy:

The number of the Apostles has been enlarged for us by this our late Apostle being reckoned among their company. These Holy ones have drawn to themselves one of like conversation; those athletes a fellow athlete; those crowned ones another crowned like them; the pure in heart one chaste in soul those ministers of the Word another herald of that Word. Most blessed, indeed, is our Father for this his joining the Apostolic band and his departure to Christ. Most pitiable we! for the unseasonableness of our orphaned condition does not permit us to congratulate ourselves on our Father's happy lot.

When that Church, so sound in the faith, at the first beheld the man, she saw features truly formed after the image of God, she saw love welling forth, she saw grace poured around his lips, a consummate perfection of humility beyond which it is impossible to conceive any thing further, a gentleness like that of David, the understanding of Solomon, a goodness like that of Moses, a strictness as of Samuel, a chastity as of Joseph, the skill of a Daniel, a zeal for the faith such as was in the great Elijah, a purity of body like that of the lofty-minded John , an unsurpassable love as of Paul. She saw the concurrence of so many excellences in one soul, and, thrilled with a blessed affection, she loved him, her own bridegroom, with a pure and virtuous passion. But ere she could accomplish her desire, ere she could satisfy her longing, while still in the fervour of her passion, she was left desolate, when those trying times called the athlete to his contests.

I shall close with the Dismissal Hymn of the Saint in two of the more perfect of languages. But I'm afraid I must also apologise on behalf of the Greek people for the second of these: one can't find a text of the Apolytikion for St Meletios with the proper polytonic markings anywhere online. Is it my fault they don't even write their own language correctly anymore?

Thou didst shine on the Church with thy heavenly knowledge, O righteous Hierarch Meletius, wise in the law; thou didst preach the equal honour of the Persons, of the Trinity and disperse the assembly of heretics. Entreat Christ our God to grant us His great mercy.