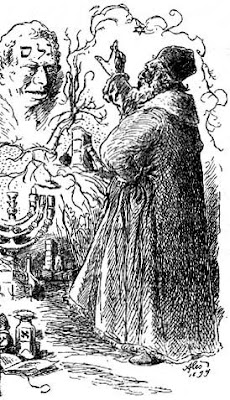 I was watching The Sword in the Stone with my kids yesterday evening, and I noticed there is a scene where Merlyn (I use T.H. White’s spelling) is using magic to do the young Arthur’s kitchen chores, complete with animated brooms and mops working on their own. I remarked to the children that after seeing ‘The Sorcerer’s Apprentice’ piece from Disney’s Fantasia, I’d be afraid to use magic for something like that.

This reminded me of something I’d read quite some time ago. For those who are not aware, the Disney piece uses music (Paul Dukas’s L’apprenti sorcier, 1897) and a story which are both based on a short ballad by Johann Wolfgang von Goethe, Der Zauberlehrling (1797). While it seems to be commonly accepted that Goethe’s poem is in turn based on a story from the Φιλοψευδής ἤ Ἀπιστῶν of Lucian of Samosata, I was fascinated to discover a footnote that mentioned it in Gershom Scholem’s essay, ‘The Idea of the Golem’ (On the Kabbalah and Its Symbolism, trans. Ralph Manheim [NY: Schocken, 1969], pp. 158-204). First, Scholem gives the following synopsis of an old story about the famous Rabbi Loew of Prague:

The story is that Rabbi Loew fashioned a golem who did all manner of work for his master during the week. But because all creatures need to rest on the Sabbath, Rabbi Loew turned his golem back into clay every Friday evening, by taking away the name of God. Once, however, the rabbi forgot to remove the shem. The congregation was assembled for services in the synagogue and had already recited the ninety-second Psalm [Ps. 91 in the LXX], when the mighty golem ran amuck, shaking houses, and threatening to destroy everything. Rabbi Loew was summoned; it was still dusk, and the Sabbath had not really begun. He rushed at the raging golem and tore away the shem, whereupon the golem crumbled into dust. The rabbi then ordered that the Sabbath Psalm should be sung a second time, a custom which has been maintained ever since in that synagoguge, the Altneu Schul. The rabbi never brought the golem back to life, but buried his remains in the attic of the ancient synagogue, where they lie to this day. Once, after much fasting, Rabbi Ezekiel Landau, one of Rabbi Loew’s most prominent successors, is said to have gone up to look at the remains of the golem. On his return he gave an order, binding on all future generations, that no mortal must ever go up to that attic. (Scholem, pp. 202-3)

Then, after the words ‘Altneu Schul’, we find the following footnote:

. . . Much has been written about this legend of Rabbi Loew, which has attracted many writers. Our first literary record of it is in 1837, when it was used by Berthold Auerbach. We have already stressed (Note 1, p. 189) that Judah Rosenberg’s The Miraculous Deeds of Rabbi Loew with the Golem are not popular legends but tendentious modern fiction. For the versions current in Prague, cf. Nathan Grün, Der hohe Rabbi Löw und sein Sagenkreis, Prague, 1885, pp. 33-8, and Fr. Thieberger, The Great Rabbi Loew of Prague, London, 1955, pp. 93-6. It was later related in Bohemia that Goethe’s ballad, The Sorcerer’s Apprentice, was inspired by a visit of Goethe to the Altneu Schul in Prague; cf. M.H. Friedländer, Beiträge zur Geschichte der Juden in Mähren, Brünn, 1876, p. 16. Friedländer speaks of this as a ‘well-known’ tradition. I have never been able to find out whether there is anything in it. (Scholem, p. 203, n. 1)

oh Scholem, he was something else..