A Homily for St Luke the Evangelist 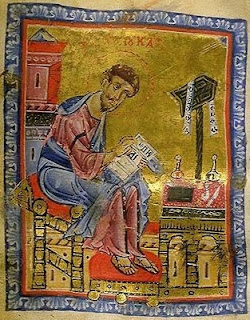 I recently preached again at school, this time for the Western feast of St Luke the Evangelist. Here once more is a readable text fashioned, and ever so slightly embellished, from my speaking notes. The readings were 2 Timothy 4:5-14 and St Luke 10:1-7. Unfortunately, I am a bit less pleased with this one than with the St Matthew homily. I hope to improve next time!

Today we celebrate the memory of the Holy Apostle and Evangelist Luke, who was sanctified by his labours for Christ’s sake and attained everlasting glory as the author of the third Gospel as well as the history of the Acts of the Apostles.

St Luke was not Jewish by birth, but may have converted to Judaism before later coming to Christ. He was a native of Antioch, which according to the Synaxarion, was ‘renowned [at that time] for the flourishing state of the arts and sciences . . . [There] Luke had developed his intellect with various scholarly studies. . . . He indubitably received an excellent education in general, for the quality of the Greek language of his writings is far more pure and correct than that of the other NT writers.’[1]

According to Bl Theophylact, St Luke ‘had a great knowledge of natural philosophy’, meaning the science of his day, ‘but . . . was also much practiced in Hebrew learning’. In Colossians 4:14, St Paul calls him ‘the beloved physician’, so we know that he was a doctor. He was a great writer who ‘knows and uses conventions’ of Greek and Roman history and novels, [2] but the prologue of his Gospel ‘rings with the poetry of prophets and psalms’. [3] Thus, he was a first-rate theologian and historian, but according to Church tradition St Luke was also a skilled artist who painted some of the first Christian iconography. He was a Renaissance man.

Some believe St Luke was also one of the two disciples who met the Lord on the road to Emmaus, but he is certainly identified as one of the Seventy Apostles sent out by Christ. It is for this reason that the passage from his Gospel in which Christ exhorts the Seventy forms the second lesson today.

After his conversion to Christ, St Luke travelled with St Paul to Greece to preach the Gospel, and there he worked diligently to establish the Church at Philippi. Next he went to Corinth to collect alms for the Palestinian Christians, who were undergoing persecution (II Cor 8:18-19). Upon his return to Palestine, St Paul was imprisoned for Christ, but, the holy Evangelist Luke remained by his teacher’s side. Indeed, he accompanied the great Apostle on the difficult voyage to Rome for his trial.

It was during St Paul’s imprisonment in Rome that St Luke, at urging of the Holy Spirit and St Paul himself, wrote his Gospel and the Acts of the Apostles. Thus, according to Eusebius (in Ecclesiastical History 3.4.6), who alludes to St Luke’s profession as a doctor:

So he has left us examples of the art of healing souls which he learnt from [St Paul and the other apostles] in two divinely inspired books, the Gospel and the Acts of the Apostles. The former, he declares, he wrote in accordance with the information he received from those who from the first had been eyewitnesses and ministers of the word, information which, he adds, he had followed in its entirety from the first. The latter he composed not this time from hearsay but from the evidence of his own eyes. [4]

St Luke’s Gospel includes many of the most beloved stories of the New Testament—the story of Christ’s birth, which we read every year at Nativity, the parable of Prodigal Son, a beautiful story of repentance, the parable of the Good Samaritan, and story of the Road to Emmaus, which as I have mentioned may have told from an eyewitness perspective. The Gospel of St Luke has a special emphasis on the Gentiles becoming part of God’s people. St Ambrose of Milan says of it, ‘But, truly, St Luke kept, as it were, a certain historical order, and revealed to us more miracles of the Lord’s deeds, yet so that the historiry of his Gospel embraced the virtue of all wisdom.’ [5]

At this point, it seems fitting to consider in some detail today’s Gospel reading, from St Luke 10. This lesson was not only written by St Luke, but presumably tells us something about him as well, thus prompting the decision to use it as the Gospel for his feast. Christ’s instructions to the Seventy, as interpreted by the Holy Fathers, suggest virtues which characterise St Luke himself, and I am sadly conscious as well that they should characterise all who would preach or teach in the Church.

First, in St Luke 10:4, we read, ‘Carry neither purse, nor scrip.’ St Ambrose of Milan points out that Christ ‘explained clearly elsewhere why no purse is to be carried, for Matthew wrote that the Lord said to the Disciples, “Do not possess gold, or silver” (St Matthew 10:9).’ [6] Thus, we see that the minister of the Gospel is to practice non-acquisitiveness.

As for the injunction to wear no shoes or sandals, the Fathers observe that since leather is the skin of a dead animal, apart from the literal meaning shoes can be seen as a symbol of mortal cares. According to St Gregory the Great: ‘It is not fitting that he who undertakes the task of preaching should burden himself with worldly affairs, lest, engrossed in such matters, he forget the business of eternal life.’ [7] St Luke was unhampered by the concerns of this world, and so should we be.

When Christ says ‘salute no man by the way’, Bl Theophylact tells us, ‘He adds this command to them, Salute no man along the way, so that they do not become preoccupied with greetings and civilities, and thus be hindered from preaching.’ [8] St Cyril of Alexandria adds the comment—‘let that which is well pleasing to God be preferred by you to all other things; and so practising an irresistible and unhampered diligence, hold fast to your apostolic cares.’ [9] And finally, St Ambrose notes, ‘. . . [W]hen divine commands are given, human obligations are surrendered for a while. . . . Therefore, even honorable acts are prohibited, lest the grace of ceremony deceive and hinder the ministry of the task, delay in which is sinful.’ [10] Thus, St Luke was single-minded in his devotion to God’s work and was not distracted even by natural pleasures.

Bl Theophylact explains St Luke 10:5, ‘And into whatsoever house ye enter, first say, Peace be to this house’, in the following way: ‘The Lord forbids them to salute anyone along the way, but it is different when they enter a house. . . . He shows that the words, Peace be to this house, are not only a greeting, but a blessing.’ [11] Thus we learn that the minister of the Gospel is called to bless those with whom he comes into contact.

Finally, when in St Luke 10:7, our Lord says, ‘And in the same house remain, eating and drinking such things as they give: for the labourer is worthy of his hire’, Bl Theophylact comments: ‘As wages you will have your food and keep; do not expect to be fed and then, in addition, to receive a wage, but consider your food to be your wage.’ [12] We can be sure that St Luke was content with what God provided for him.

In short, all of these virtues—non-aquisitiveness, freedom from earthly care, single-minded devotion to God’s work, blessing others, and contentment with what God provides—are enjoined by the Gospel to all of us, but especially to the clergy, and as we can see from the testimony of his life, they are certainly characteristic of St Luke himself.

To return now to that testimony, St Paul was eventually released for a time, but at last under the emperor Nero he was imprisoned again. At last, facing certain death, the great Apostle writes to St Timothy in today’s Epistle: ‘Do thy diligence to come shortly unto me: for Demas hath forsaken me, having loved this present world, and is departed unto Thessalonica; Crescens to Galatia, Titus unto Dalmatia. Only Luke is with me’ (2 Tim 4:9-11). Concerning this striking testimony, the great Chrysostom observes, ‘Luke adhered to Paul inseparably. . . . He was a lover of labors and learning, and a man of endurance and perseverance. Of him Paul writes that his “praise is in the Gospel throughout all of the churches” (2 Cor 8:18).’ [13]

After St Paul’s martyrdom by beheading at Rome, St Luke went on to spread the Gospel in Italy, Dalmatia, Gaul, Egypt, and especially Greece, where he spent the bulk of his remaining years planting churches. At last, the ‘beloved physician’ himself was martyred in Greece at the age of 84 by being crucified on an olive tree. He was buried in Thebes, the setting of some of Greece’s greatest tragic plays, but his precious remains were later transferred to Constantinople with great honour.

Some of St Luke’s most interesting ‘posthumous fame’, however, is in the artistic and literary use of the angelic creature with which his Gospel has been traditionally identified. The four creatures of Ezekiel 1:4-14 and Revelation 4:6-8—one like a man, one like a lion, one like an ox, and one like an eagle—have long been identified with and used as symbols of the four Evangelists. St Luke’s emblem is the one with ‘the face of an ox’—which St Irenaeus of Lyons tells us is because his Gospel ‘is of priestly character, [since it] begins with the priest Zechariah sacrificing incense to God (St Luke 1:9), for the fatted calf was already prepared, to be sacrificed for the recovery of the younger son (St Luke 15:23, 30)’ in the Prodigal Son parable. [14]

It is in this from that Dante in the Purgatorio (29.91-3) describes seeing St Luke’s Gospel: ‘with green foliage crowned’ and following the 24 elders ‘As star succeeds to star within the round / Of heaven’. [15] Furthermore, the angelic ox is followed shortly thereafter by the Book of Acts in the form of an aged man who ‘seemed a member of the craft possessed / By the great Hippocrates [the famous physician of antiquity], whom Nature made / To help those creatures whom she loves the best’ (Purg. 29.136). [16] Thus, we see that St Luke, renowned for his literary craftsmanship, found a special place in one of the greatest works of literature in Christian history.

I shall conclude with a Byzantine hymn, known as a ‘kontakion’, written in honour of St Luke:

Let us praise the divine Luke, the herald of true piety, the orator of ineffable mysteries, the star of the Church; for the Word, Who alone knoweth the secrets of man’s heart, hath chosen him with the wise Paul to be a teacher of the nations. [17]

[5] St Ambrose of Milan, Exposition of the Holy Gospel According to Saint Luke with Fragments on the Prophecy of Isaias, tr. Theodosia Tomkinson (Etna, CA: Center for Traditionalist Orthodox Studies, 1998), p. 2.