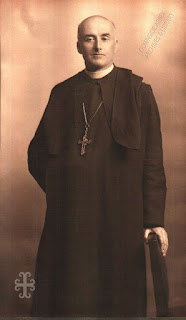 In the last few weeks I’ve made a happy series of discoveries about connections between some of my books. I’ll begin with the series of histories of English monasticism and religious orders by Dom David Knowles, which my dear friend, the old Ochlophobist, sent to me a few weeks ago. I began slowly reading the first of these upon receipt—The Monastic Order in England: A History of Its Development from the Times of St Dunstan to the Fourth Lateran Council, 943-1216 (Cambridge: Cambridge U, 1950)—and there are still three more to go: The Religious Orders in England, Vols. 1-3.

A footnote at the bottom of the first page of The Monastic Order in England made an intriguing reference to a work I had been rather mildly interested in for some years: ‘For a general view of Benedictine history, polity and life Abbot [Cuthbert] Butler’s Benedictine Monachism (1919; 2 ed. 1927) stands in a class by itself.’ [1] Thus it was that during my solitary sojourn on the campus of the University of Oklahoma a few weeks ago, I was excited to discover a copy of the second edition of Abbot Butler’s work in the old stacks of the Bizzell Library. This copy was a later reprint featuring a foreword by Dom David Knowles, and it was this forward that determined me on acquiring the book for myself. Knowles writes of Benedictine Monachism: ‘It was accepted at once as being, what it still remains, the best historical and analytical survey of Benedictine life in the English language, or indeed in any language, even if we may go to others for a fuller historical account or for a more adequate definition of the monastic spiritual ideal.’ [2]

Having received a copy in the mail earlier this week, I have begun reading it for myself. It is in this way that I made two more fun discoveries.

First, I learned from the second footnote of chapter II that Abbot Butler is responsible for the article on monasticism (and, according to a footnote on p. 16, an article on ‘Basilian monks’ as well!) in the 11th edition of the Encyclopaedia Britannica (1911), which rests on the shelf just a few feet away from me. I have not yet read these articles, but I now intend to.

But second, at the bottom of the very same page where Butler references his own EB 11 article, he also writes:

If it be desired to control what is here set forth by reference to historians of monasticism who stand outside the movement and criticize it from an independent standpoint, no better books in English can be recommended than those of Hannay and Workman, mentioned in the List of Works. [3]

Upon turning to the List of Works, which immediately precedes the beginning of chapter I, I found this:

It will be of interest to name also two writers who view monasticism from outside with a critical though not unfriendly eye; they both write with wide and accurate knowledge of the literature, old and new, and with sympathetic understanding: James O. Hannay (clergyman of the Church of Ireland), The Spirit and Origin of Christian Monasticism (1903); Herbert B. Workman, Principal of the Westminster Training College (Wesleyan), The Evolution of the Monastic Ideal (1913). Both books are frequently referred to in these pages. [4]

Although I had never heard of Hannay’s work, I immediately realised that although I had not recognised his surname, Workman’s Evolution of the Monastic Ideal was familiar to me as a book I had purchased in paperback reprint several years ago for just a few dollars (and which, embarrassingly, I have also not yet read!).

But the final discovery really brought a smile. The forward to my reprint of The Evolution of the Monastic Ideal was written by none other than Dom David Knowles, OSB! [5]

[5] Dom David Knowles, Foreword, The Evolution of the Monastic Ideal from the Earliest Times Down to the Coming of the Friars: A Second Chapter in the History of Christian Renunciation, by Herbert B. Workman (Boston: Beacon Press, 1962), 13 pages, unnumbered.