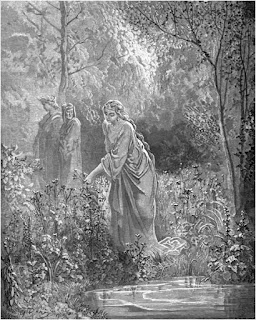 From the beginning to the end of last school year, I met with a group once a week to discuss Dante's Purgatorio canto by canto. We had some very learned and insightful readers participating in that group, and there was a lot of really challenging discussion. At one point, we paused in some perplexity over a passage in Canto 27. While resting and admiring the stars, Dante tells us:

Thus ruminating, as I gazed at these,
sleep overtook me, sleep which many a time
brings tidings of a thing before it sees
The light; for in that hour when Venus shines
upon the mountainside her orient gleam,
ever enkindled by the fire of love,
A young and lovely lady in a dream
appeared to me upon the meadowland,
gathering flowers, and she said in song,
'Let anyone who may demand my name
know that I am Leah, and I go to make
myself a garland by my lovely hands.
Here I adorn myself for the delight
I will enjoy when looking in my glass.
My sister Rachel never leaves that sight
But gazes in her glass the whole day through.
She for her lovely eyes, I for my hands--
her yearning is to see, and mine to do.' (ll. 91-108) [1]

The allusion here is to Genesis 29:17 (LXX): 'And the eyes of Lea were weak. But Rachel was beautiful in appearance, and exceedingly fair in countenance.' But what was the significance of this verse to Dante?

Anthony Esolen's endnote on this passage says: 'Medieval exegetes saw in Rachel and Leah an allegory of the contemplative and the active life, inferring from the weakness of Leah's eyes a keenness of vision in Rachel, and inferring from Leah's fecundity a propensity for the practical virtues.' [2] Unfortunately, Esolen doesn't cite any examples of these exegetes. But while glancing through Richard Gamble's anthology of readings in education, The Great Tradition, I came across just such a reading in an excerpt from St Gregory the Great's homilies on Ezekiel. [3] I cite the original source, translated by Theodosia Gray and published by the Center for Traditionalist Orthodox Studies:

10. These two ways of life were, as was also said before us, symbolized by Blessed Jacob's two wives, viz. Leah and Rachel. For Leah is interpreted as meaning laborious and Rachel truly as a sheep, or a manifest beginning. Then the active life is laborious because it is fatiguing in work, but the simple contemplative strives also to see its beginning, viz. Him Who said: 'I am the beginning, for which reason I speak to you' (Jh. 8:25). Then Blessed Jacob had indeed desired Rachel but in the night accepted Leah because all who are turned to the Lord have desired the contemplative life and seek the quiet of the Eternal Kingdom, but must first in the night of this present life perform the works which they can, sweat with effort, i.e. accept Leah in order that they afterward rest in the arms of Rachel, in order to see the beginning. Then Rachel was a seer, and sterile, Leah truly purblind, but fertile, Rachel beautiful and barren, because the contemplative life is splendid in the spirit but, whereas it seeks to rest in silence, it does not produce sons from preaching. It sees and does not bring forth, because in zeal for its quiet it is less kindled in the collection of others, and does not suffice to reveal to others by preaching how much it inwardly perceives. Leah truly is purblind and fertile because the active life, while it is engaged in labor, sees less but when, now by word now by example, it kindles its neighbors to follow suit, it produces many sons in the good work. And if it does not avail to stretch its mind in contemplation yet it is able to beget followers from that which it does outwardly. [4]

All of this, of course, very easily explains the contrasts in lines 107-8--'She for her lovely eyes, I for my hands-- / her yearning is to see, and mine to do'--where eyes/seeing correspond to the contemplative gaze, and hands/doing to the works of the active life.

But what of the reference to a mirror? For one thing, if the gaze is associated with contemplation and therefore Rachel, why does Leah speak to Dante of eventually 'looking in my glass' (l. 104)? For that matter, why is even Leah gazing at 'her glass the whole day through' (l. 106)? At least one of our Dante Club members thought it suggestive of vanity. Esolen at least had nothing to say about it.

My guess was stimulated by the memory of a talk I once heard Fr Justin Sinaites give, and about which I once blogged here. Fr Justin made reference to something he'd read in Fr Andrew Louth's work about the Fathers' understanding of mirrors, and I made the effort to try to track down the passage to which he was likely alluding. I found it in The Origins of the Christian Mystical Tradition: From Plato to Denys:

[In Contra Gentes, St Athanasius the Great] speaks of the soul 'being a mirror in which it can see the image of the Father' (CG 8). And later in the same work he says: 'So when the soul has put off every stain of sin with which it is tinged, and keeps pure only what is in the image, then when this shines forth it can truly contemplate as in a mirror the Word, the image of the Father, and in him meditate on the Father, of whom the Savior is the image' (CG 34). This idea of the soul as a mirror which, when pure can reflect the image of God seems to be original to Athanasius. (There are faint hints of it in Theophilus and Plotinus, but nothing as clear and definitive as we find in Athanasius.)

I don't know whether Dante would have been familiar with some translation of St Athanasius's text, or whether he might have taken this image from some later Father, but it strikes me that this is precisely what is going on in Purgatorio 27. Recall again lines 103-6:
Here I adorn myself for the delight
I will enjoy when looking in my glass.
My sister Rachel never leaves that sight
But gazes in her glass the whole day through.
I believe that Leah is adorning herself by purifying her soul or heart through the practice of the virtues so that she can behold God, whereas Rachel has already begun the contemplation of His image by means of her 'lovely eyes'.
[1] Dante Alighieri, Purgatory, tr. Anthony Esolen (NY: Modern Library, 2004), p. 295.
[2] Ibid., p. 481.
[3] The passage is found in Richard E. Gamble, ed., The Great Tradition: Classic Readings On What It Means to Be an Educated Human Being (Wilmington, DE: ISI, 2008), p. 239.
[4] Theodosia Gray, tr., The Homilies of Saint Gregory the Great On the Book of the Prophet Ezekiel, ed. Presbytera Juliana Cownie (Etna, CA: CTOS, 1990), pp. 175-6.
[5] Fr Andrew Louth, The Origins of the Christian Mystical Tradition: From Plato to Denys (Oxford: Clarendon, 1981), pp. 79-80.
Posted by Aaron Taylor at 8:36 AM 2 comments: