Eucharistic Ontology: An Addendum on Fr Nicholas Loudovikos in English 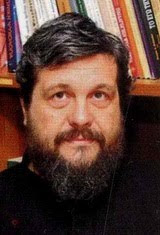 In this post from the Spring of 2009, I strongly recommended the theology of Protopresbyter Nicholas Loudovikos of the University Ecclesiastical Academy of Thessaloniki. At that time, I wrote that ‘none of Fr Loudovikos’s work has, to my knowledge, yet been published in English’, but added, ‘If I remember correctly, an English translation of another book, Η Ευχαριστιακή Οντολογία (Athens: Domos, 1992), is in the works...’ I’m afraid I must admit that around the time that I wrote the original post, at least one of Fr Nicholas’s articles—a fine critique of some of the theological positions of his former teacher, the renowned Metropolitan John (Zizioulas) of Pergamon—was already being published in English under the title, ‘Person Instead of Grace & Dictated Otherness: John Zizioulas’ Final Theological Position’, The Heythrop Journal XLVIII (2009), pp. 1-16. I should have noted this and at least written an addendum to the original post some time ago.

Well, as many of you may know already, the second statement has proved to be correct, and the said translation having been completed, the first statement is now doubly if not triply untrue. Holy Cross Press has published this book, which when I talked with him in 2007 Fr Nicholas spoke of often as one of his more important, under the title, A Eucharistic Ontology: Maximus the Confessor’s Eschatological Ontology of Being as Dialogical Reciprocity (Brookline, MA: Holy Cross, 2010). Here is Fr Andrew Louth’s blurb about the book as posted on Amazon:

In this remarkable book, Fr Nikolaos Loudovikos brings his profound knowledge of the greatest of Byzantine theologians, St Maximus the Confessor, into dialogue with the recent currents of philosophy and theology in the West. This in itself is rare enough, but his central claim—that who we really are is disclosed in our final destiny in God—is one that he shows is rooted in our participation in the Eucharist. This is an intellectually demanding work, but in it Fr Loudovikos never loses sight of the fact that what he has to say bears directly on how we understand what it is to live as a Christian in the twenty-first century.

I myself have not yet read the book in Greek, much less English (though if there remain any generous readers out there willing to help a brother out, I would be delighted to find a copy in the mail!), but I have little doubt that it will prove to be very much worthwhile. The title may sound a bit unwieldy and pretentious, though it doesn’t strike me as nearly so bad in Greek, but Fr Loudovikos is a theologian who really must become better known in the English-speaking world. Order this book now!
Posted by Aaron Taylor at 12:09 PM 22 comments:

A Homily on the 'Inheritance of the Saints in Light' 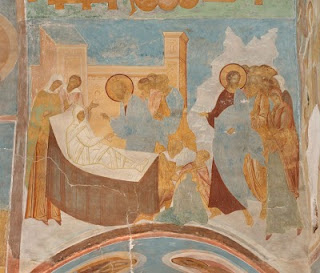 Here’s the latest homily, which I gave yesterday, 15 November. The readings were Colossians 1:3-12, and St Matthew 9:18-26. Again, I’ll try to remember to add the—in this case, few—references later.

12 Giving thanks unto the Father, which hath made us meet to be partakers of the inheritance of the saints in light:

The verse I quoted is the twelfth verse of the first chapter of Colossians—the last verse of today’s Epistle reading. I’d like to talk about what St Paul means when he refers to being made ‘partakers of the inheritance of the saints in light’.

First of all, the use of the word ‘partakers’ by the King James translators is reminiscent of 2 Peter 1:4, where St Peter refers to our becoming ‘partakers of the divine nature’. Partaking of the divine nature, via the uncreated light or energies of God, has marvellous effects in our lives, and we can get a glimpse of these effects in the various miracles of Christ’s earthly ministry.

Two examples can be seen in today’s Gospel, from St Matthew 9:18-26: first, the healing of the woman with an issue of blood—the miracle story within the miracle story; and second, the raising of the ruler’s daughter from the dead—the pièce de résistance.

Of the woman with an issue of blood, the Greek text literally says, ‘I shall be saved’, ‘thy faith hath saved thee’, and ‘the woman was saved’. The translators of the King James Version, however, chose the expression ‘made whole’, which is of course a beautiful and rich expression in its own right. Now, what’s so suggestive about these descriptions of a healing from a physical malady is that physical illness can be seen as a metaphor for sin—the sin and the sinful passions that afflict us are in fact illnesses of the soul. The ‘issue of blood’, in fact, is a particularly apt metaphor for sin. I am reminded of one of the famous stories of the Desert Fathers, wherein St Moses the Black used a leaky jug to illustrate the way our sins ‘run out’ behind us and we do not see them.

But in the raising of the ruler’s daughter we see perhaps the most dramatic effect of partaking of the divine nature, that is the inheritance of the Saints in light—deliverance from death. St Paul writes in I Corinthians 15:26, ‘The last enemy that shall be destroyed is death.’ And later on in that chapter, inspired by the power of Christ’s Resurrection, St Paul actually taunts death when he writes, ‘O Death, where is thy sting’ (I Cor 15:55)?

The various raisings from the dead in the Gospels—such as that in today’s reading, or that of Lazarus—are a foretaste of this final destruction, of which Shakespeare wrotes, ‘And Death once dead, there’s no more dying then’ (Sonnet 146). This destruction of death has been effectively accomplished in Christ, ‘who gleams like lightning in the unapproachable light of the Resurrection’, and this is the inheritance of the Saints, of which St Paul says we partake. Until Christ’s return, ‘there’s no more dying’ in sin if we repent and follow Him. Bl Theophylact, commenting on the last verse of today’s Gospel reading, Mat 9:26, writes, ‘And you, O reader, who are dead in sins, He will also resurrect when He puts outside the crowd and its tumult and takes you by the hand so that you might act.’ But when Christ returns, ‘there’s no more dying’ in the body, since we are transformed.

Although it’s not part of today’s Epistle reading, in verse 13 of Colossians 1 St Paul contrasts the light imagery of verse 12 with what he calls ‘the power of darkness’:

13 Who hath delivered us from the power of darkness, and hath translated us into the kingdom of his dear Son:

The two healings in today’s Gospel illustrate vividly this deliverance from the power of darkness. St Gregory of Nyssa identifies the ‘garments of skin’ with which the Lord clothes Adam and Eve in Genesis 3:21 with the physical and spiritual effects of the Fall, in other words, the power that darkness has over us. But Christ ‘hath clothed mortality with incorruption’, and St Gregory, speaking of the future condition of the Church in the final Resurrection, says, ‘If we will not be wearing that skin, how shall we preserve the conditions which come from it?’

Now, in our own day, those conditions may seem formidable, even insurmountable. It may seem impossible that we should ever overcome sickness and death, particularly in the last one hundred years when it has finally become physically possible to wipe out all human life on this earth. This state of things can be worrisome and disturbing. Indeed, one of the great but lesser-known spiritual figures of the twentieth century, the Russian theologian Fr Sophrony of Essex, was deeply troubled by this as a young man. Fr Sophrony prayed with anguish of soul for God to deliver him from despair, and in reply he was vouchsafed to be a partaker ‘of the inheritance of the saints in light’. He writes, in We Shall See Him as He Is, tr. Rosemary Edmonds (Platina, CA: St Herman of Alaska Brotherhood, 2006):

And lo, on Easter Saturday, . . . the Light visited me after I had taken communion, and I felt it like the touch of Divine Eternity on my spirit. Gentle, full of peace and love, the Light remained with me for three days. It drove away the darkness of non-existence that had engulfed me. I was resurrected, and in me and with me the whole world was resurrected. The words of St John Chrysostom at the end of the Easter Liturgy struck me with overwhelming force: ‘Christ is risen and there are no dead in the grave’. Tormented hitherto by the spectre of universal death, I now felt that my soul, too, was resurrected and there were no more dead . . . If this is God, then quickly let me abandon everything and seek only union with Him [ellipsis in the original]. (p. 178)

In the name of the Father, and of the Son, and of the Holy Spirit. Amen.
Posted by Aaron Taylor at 8:06 PM 8 comments: