This is from an article I wrote for our school newsletter, the Epiphaneia, Spring 2016. I have left the formatting as it appears in the newsletter:

In his award-winning book, Dante the Maker, William Anderson relates Dante’s poetic techniques and achievement to fairly modern psychological theories. In one passage, he writes:

If the dominant hemisphere [of the brain] is concerned with what Michael Polanyi calls “explicit knowledge,” then the other hemisphere enfolds what he has pointed out as our much greater reserve of information, our “tacit knowledge.”…The voices, music, and mental visions of the Purgatorio [the second cantica of the Divine Comedy] are examples of the working of this non-dominant hemisphere, revealing how its function, rightly understood and used, seems to lead inward to the repose of contemplation.


It is a complex idea, and the potential ramifications are no doubt endless. But to my mind there is a direct connection between the “voices, music, and mental visions” of the Purgatorio—along with all of its other essentially educational techniques, running the gamut from didactic speech to the reliefs carved by the hand of God into the side of the mountain—and our desire to practice “shaping students’ affections for Truth, Goodness, and Beauty.” For if students’ affections are to be shaped, and it must be admitted this is a daring proposition, then it will surely be less by explicit than by tacit knowledge. Indeed, I can’t help but think such a shaping will take place through something very like the Liturgy.

This is the basic intuition behind Reformed philosopher James K.A. Smith’s notion of liturgies “as pedagogies of (ultimate desire).” Of course, neither is it entirely unknown to the Protestant tradition before him. The great English reformer, Richard Hooker, famously observed:

Now men are edified, when either their understanding is taught somewhat whereof in such actions it behoveth all men to consider, or when their hearts are moved with any affection suitable thereunto….Because therefore unto this purpose not only speech but sundry sensible means besides have always been thought necessary, and especially those means which being object to the eye, the liveliest and most apprehensive sense of all other, have in that respect seemed the fittest to make a deep and a strong impression….


All of this is, of course, a commonplace among the Fathers. St. Gregory of Nyssa speaks of the “harmonious life” that “singing [the Psalms] seems to me to offer through symbols,” and St. John Damascene writes movingly of the effect upon him of liturgical art: “I have often seen images of this tender scene [the Sacrifice of Isaac] in pictures and I have not been able to pass from seeing it without tears, so skillfully does the artist bring this story to my sight.”

These men are obviously speaking primarily of the great tradition of the Church’s worship and liturgical arts. But the question remains, what does this shaping of the affections look like in the classroom?

I suggest it begins in two places: the material (or curriculum) and the teacher. The material, naturally, must be the best. We read the greatest, the most beautiful, the most true and morally good, but also in some cases simply the most important works of all time. They work in myriad ways upon students’ affections—through their language, their images, their stories, and often just in the spirit (or Spirit!) behind them, for “Christ plays in ten thousand places.” If this does not teach love of that which deserves it, I fear little else can.

In regard to the teacher, that giant of education, John Henry Cardinal Newman, has written: ‘The general principles of any study you may learn by books at home; but the detail, the colour, the tone, the air, the life which makes it live in us, you must catch all these from those in whom it lives already.” Any teacher must be aware of his or her frequent failure to live up to this responsibility, but I daresay we can accomplish much here, in direct proportion, I believe, to our own love of the material itself. If the students sense how much we ourselves stand in adoration before the truths and beauties that we teach, then I think they must at least sense too the call of these upon their own hearts.

'The eyes of the Lord' - Scripture, Rule, Florilegium 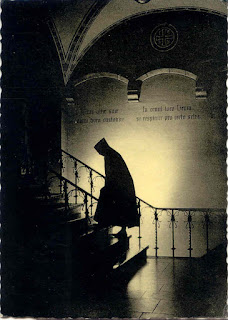 I had an interesting confluence of readings Saturday morning (21/8 May). My Old Testament reading (from the Authorised Version) was II Chronicles 13-16. As I read it early in the morning by candlelight, I was struck by the words of Hanani the seer to Asa king of Judah: ‘For the eyes of the Lord run to and fro throughout the whole earth, to shew himself strong in the behalf of them whose heart is perfect toward him’ (II Chron. 16:9).

But then, the same day’s reading from the Rule of St Benedict, from Chapter 4, Quae sunt instrumenta bonroum operum, included the oft-repeated Benedictine maxim, In omni loco Deum se respicere, pro certo scire (Prov. V. 21), ‘To know for certain that God sees one everywhere’ [1]. As Dom Paul Delatte says of this passage, ‘This advice must be very important since St Benedict is constantly repeating it’ [2] He goes on to write:

For us this is no fiction of the imagination, but a living reality; nor have we a mere witness, but a Being who is at once spectator and actor, no man but God. And we Christians say: Nemo peccat videns Deum, ‘No one seeing God sins.’ The impeccability of the elect is due to their being for ever rooted in good by the uninterrupted contemplation of beauty. Now we by faith may share in this privilege of vision, and the ‘exercise of the presence of God’ may become something assiduous and constant, like our consciousness of ourselves. [3]


So while the words of Hanani and those of St Benedict serve different purposes—the one emphasizing God’s solicitude on our behalf, the other His watchfulness over our actions—the starting point of God as Witness of human acts is the same.

Finally, however, I turned to that day’s reading in a florilegium I’m reading through for the year: Day by Day with the Early Church Fathers. Each day pairs a Scriptural verse with a short passage from one of the Fathers, and the verse for that day was precisely II Chronicles 16:9! While the accompanying patristic passage, from Tertullian (not actually a ‘Father’ in the Orthodox sense, I know), does not explicitly refer to or comment on it, his words could be seen as an application of the second part of the verse to a specific kind of situation—that of persecution. Thus, he writes, ‘If suffering is completely in God’s hands, don’t we just leave it up to His will?...Why, when witnessing, don’t you be consistent, trust God, and say, “I will do my part. I won’t run away. God, if He chooses, will be my Protector”?’ [4] Placing Tertullian’s words in proximity to those of Hanani makes the latter relevant to Christians in the same way that King David’s Psalms often are. Furthermore, both Hanani and Tertullian find a complimentary development of the idea of God’s watchfulness in St Benedict and his commentator, Dom Paul Delatte.

[2] Dom Paul Delatte, OSB, A Commentary on the Holy Rule of St Benedict, tr. & ed. Dom Justin McCann, OSB (Latrobe, PA: The Archabbey Press, 1959),p. 75. Dom Paul points out, ‘He gives it in the Prologue, in the first and last degrees of humility, in the chapter “Of the discipline of saying the Divine Office”’ (ibid., p. 75).