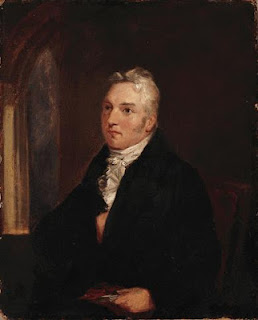 Two and a half years ago I posted an excerpt from my master's thesis in which I tried to show that the 'imagination' that the Fathers have tried to warn us about and the 'imagination' that the Romantic poets have made into a divine faculty are not, as I have heard and seen argued, two totally different things. In other words, some would follow Samuel Taylor Coleridge's (and subsequently, Wordsworth's) distinction between 'Imagination' conceived as this divine power, and 'Fancy', the mere ability to form 'mental images of things not actually present', offering the latter as the proper object of the patristic warning.

The linking point for me on this issue was J.R.R. Tolkien's essay 'On Fairy-stories'. Tolkien has a very great esteem for the power of the imagination, but without naming Coleridge, the great philologist finds 'the verbal distinction philologically inappropriate, and the analysis inaccurate': 'The perception of the image, the grasp of its implications, and the control which are necessary to a successful expression, may vary in vividness and strength: but this is a difference of degree in Imagination, not a difference in kind.' [1]


At one point since the original post, I heard a lecture by a Coleridge buff in which it was claimed that Coleridge's 'primary Imagination' was actually more akin to the 'nous' of patristic psychology, and was thus very much higher indeed than the image-making faculty. When I raised the question of Tolkien's dismissal of the Imagination/Fancy distinction, my question was not really addressed. (To be fair, I later heard the lecturer admit that he was prone to be a bit sloppy in his identifications of such things.)


So then, just last Monday, I was reading Shadows of Ecstasy, the first attempt at a novel by oddball Inkling, Charles Williams. I had the impression that Williams was likely much more of a Coleridgean than Tolkien, and my lecturer friend even suggested that 'Ecstasy' might be a reference to 'STC'. Well, imagine my astonishment when I read the following exchange:


'I hope they'll use imagination [in their government propaganda],' Sir Bernard said. '[Acknowledging] One or two planes destroyed on our side would make the bulletins credible.'


'I do wish you wouldn't say "imagination",' Roger complained. 'It isn't, you know; only the lowest kind of cunning fancy.'


'I've never been clear that Coleridge was right there,' Caithness said meditatively. 'Surely it's the same faculty--the adaptation of the world to an idea of the world.' [2]


Naturally, this got me very excited once again about the whole issue. I even recalled that I had recently purchased the critical edition of Tolkien's essay that came out four years ago. Rushing to consult that to see whether there was any discussion of Coleridge's place in Tolkien's thoughts on imagination, I was disappointed to find no mention of the Romantic in the notes on that passage of the essay (surely an oversight, one would think!). I did however find the two very interesting notes which follow:


--Fancy...the older word Fantasy. Tolkien's discussion here and in the succeeding paragraphs is essentially an expanded paraphrase of definition 4 under the entry for 'Fancy' (a contraction of 'Fantasy' as noun and adjective) in the first edition of The Oxford English Dictionary. Since he drew on it so heavily, the entire definition merits inclusion here: 'In early use synonymous with Imagination: the process and faculty of forming mental representations of things not present to the senses; chiefly ​applied to the so-called creative or productive imagination, which frames images of objects, events, or conditions that have not occurred in actual experience. In later use the words "fantasy" and "imagination" (esp. as denoting attributes manifested in poetical or literary composition) are commonly distinguished: "fancy" being used to express aptitude for the invention of illustrative or decorative imagery, while "imagination" is the power of giving to ideal creations the inner consistency of realities.'


--'the power of giving to ideal creations the inner consistency of reality'. See the preceeding entry. It is worthy of note that Tolkien changes the final word from 'realities' to 'reality', thus shifting the reference from plural phenomena to a singular concept, an abstraction. The phrase 'inner consistency' is used by Aristotle in his Poetics, but not in relation to 'ideal creations'.


--a cancelled early version of Tolkien's discussion from MS C reads: I propose to use Fantasy phantasia a making visible to the mind of the operation whereby mental images 'of things not actually present' are expressed, shown forth, created. The faculty of conceiving the images is properly called Imagination. But in recent times (in technical not normal language) Imagination has often been held to be something higher than Fantasy (or the reduced and depreciatory form Fancy); to be 'the power of giving to ideal creations the inner consistency of reality'. That distinction seems to me confused. The mental part of image-making is one thing, and should naturally be called Imagination. The grasp, and vivid perception of the image, a necessary preliminary to its successful expression, is a difference not of kind but of degree. The achievement of that expression which gives, or seems to give, 'the inner consistency of reality'--that is, commands Secondary Belief--is indeed another thing: the gift of Art, the link between Imagination and the final marvel of Subcreation: Fantasy, the showing forth, that power which the Elves have to the highest degree. (Bodleian MS.Tolkien 14, folio 160 verso) [3]


On a final note, since I wrote the passage of my thesis found in the original post on Coleridge and the imagination, I've had a look at C.M. Bowra's 1948-1949 Harvard lectures, The Romantic Imagination. Although he is more concerned with the poetry itself than with analysing works like the Biographia, Bowra makes the striking point that 'Coleridge does not go so far as Blake in the claims which he makes for the imagination.' [4] To wit, 'For Blake the imagination is nothing less than God as He operates in the human soul. It follows that any act of creation performed by the imagination is divine and that in the imagination man's spiritual nature is fully and finally realized.' For Coleridge on the other hand, the imagination, while 'of first importance', merely 'partakes of the creative activity of God.' [5]