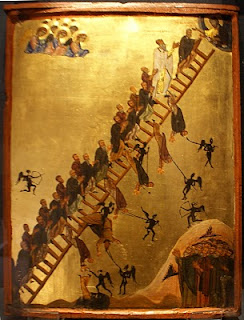 One reader expressed some interest in my reference in the last post to this year's Climacus Conference in Louisville, KY. I am pleased to announce that the homepage for the conference is up and running (here), and that the roster of speakers and subjects looks very interesting indeed. The two heavyweights in my book are Vigen Guroian, whose talk is entitled, 'On the Real Meaning of Mentor: Readings in Great Literature', and David Bradshaw, whose talk is entitled, 'What is Faith? Plato, Nietzsche, & Christ'. Yours truly will also be giving a talk, with the title, 'In Thy Law Will He Meditate Day & Night: The Study of Scripture & Classical Education'. I have included a two-sentence summary on the homepage which reads as follows:

This talk will draw on scholarly studies of enduring 'oral' qualities in Western literary habits to show how such qualities have traditionally marked Christian 'study' of the Bible, particularly in the monastic milieu. The contemporary relevance of these oral qualities will be emphasized, especially insofar as they dovetail with the methods and aims of Christian classical education.

My friend, Bishop Savas of Troas, tells me he intends to go, and I know that not only Eighth Day Books, merchants attendant at last year's conference, but also the fathers of Holy Cross Hermitage in West Virginia will be setting up tables with their wares this year. I hope to see at least a few Logismoi readers there!
Posted by Aaron Taylor at 2:21 PM 4 comments:

At Last, a Short Book Update 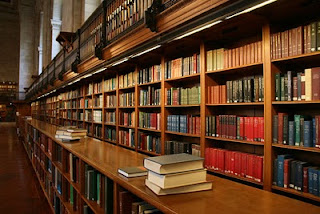 While some of my recent book acquisitions have inspired me to write a good old-fashioned ‘book update’, it has been so long since the last ‘update’, that I scarcely know where to begin and am certainly unable to cover everything. I shall confine myself therefore to a few of the most recent and most significant acquisitions.

Today, for example, a trip to Half Price Books yielded the first volume (containing Books I-VIII) of the Loeb Classical edition of St Augustine’s Confessions, tr. William Watts [1] (Cambridge, MA: Harvard U, 1999)—a steal at $5.38. A look inside the mailbox revealed William A. Graham’s Beyond the Written Word: Oral Aspects of Scripture in the History of Religion (Cambridge: Cambridge U, 1993). [2]

On another HPB trip a few weeks ago, I discovered William Griffin’s [3] fascinatingly colloquial translations of St Augustine—Sermons to the People: Advent, Christmas, New Year’s, Epiphany, tr. & ed. William Griffin (NY: Image, 2002). On the first day of the new year, I used a 50%-off coupon from Borders to purchase The Classical Tradition, ed. Anthony Grafton, Glenn W. Most, & Salvatore Settis (Cambridge, MA: Harvard U, 2010), a fascinating reference work on the continuity of the classical tradition in Western civilisation. At some point, I also received via post a copy of St Gregory Palamas’s Homilies, ed. & tr. Christopher Veniamin with the Monastery of St John the Baptist (Waymart, PA: Mount Thabor, 2009). The latter is a review copy sent to me by one of the editors of Orthodox Life, the former blogger known as ‘Felix Culpa’. Look for my review to be published, potentially, in the March-April issue.

Finally, and perhaps most interestingly, I’ve received a few books from a fellow by the name of Dennis Lackner. It’s a long story, but in this post back in 2009 I quoted from a fascinating paper of his on the Camaldolese that I had found in a limited preview on Google Books. He came across the post and we swapped a few e-mails, in one of which he sent me a pdf of the full paper. Fast-forward to Friday, 31 December 2010, and while randomly looking through old e-mails for unprinted pdfs, I discovered his and started rereading it, thinking that I might contact him with some thoughts I had about a few points. That very night, I received a mass New Year’s Eve greeting from the man himself—an interesting coincidence, I thought.

Well, the very next day, I received a personal e-mail from Dennis, asking whether I would be willing to read his entire doctoral dissertation on the Camaldolese, which he is hoping to publish, and to make editorial comments and suggestions on it. It turns out he has been keeping up with Logismoi, and had recently purchased Fr Nicholas Loudovikos’s Eucharistic Ontology at my behest. He therefore offered in return for my help to send me a copy of this book. Needless to say, I readily agreed, and was eagerly anticipating its arrival. I did not anticipate, however, the concomitant arrival of Charles Williams’s The Place of the Lion (Grand Rapids, MI: Eerdmans, 1972) and Hans Urs von Balthasar’s Cosmic Liturgy: The Universe According to Maximus the Confessor, tr. Brian Daley, SJ (SF: Ignatius, 2003). Rest assured, there was much rejoicing. Thank you sincerely, Den! С Рождеством Христовым!


[1] I’m not sure whether there is any relation to Victor Watts, translator of Boethius.

[2] I ordered this book myself to help prepare for a talk I plan to give at the Climacus Conference in Louisville, KY, next month, entitled ‘In Thy Law He Will Meditate Day & Night: The Study of Scripture & Classical Education’.

[3] Thus bringing the total of Williams to three in as many paragraphs.
Posted by Aaron Taylor at 11:04 PM 10 comments: