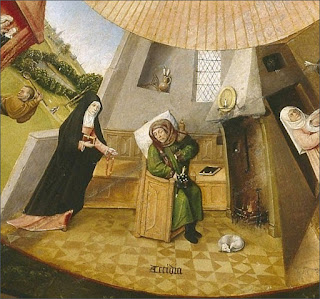 Five and a half years ago I wrote a post on the 'deadly sin' of acedia, traditionally identified with the 'noonday demon' of Psalm 90:6 (LXX) and later translated as 'sloth' but expressing something much more complex than what we typically mean by that English term. In that post I primarily quoted some descriptive passages on the symptoms of acedia from Evagrius of Pontus and his disciple, St John Cassian. In the end, despite Helen Waddell's identification of the vice with what Thomas Gray refers to as a 'white melancholy', as well as with 'the sullen lethargy that is the sterile curse of the scholar and the artist', [1] I ventured the opinion that there was something particularly spiritual or religious about acedia that distinguished it from the scholar's lethargy on the one hand or from the largely medical problem of depression on the other. Although I did not say so at the time, I was tempted to regard acedia as something typical of desert monastics and probably not too relevant to modern men and women living in the world.

I have since had a major change of opinion. I think my former beliefs stemmed in part at least from a failure to realize the true nature of the ailment of which the Fathers wrote so eloquently about the symptoms, and thus a failure to recognize how those symptoms might translate in a more than superficial way to the life of a non-monastic who lives in a city rather than a desert. The book that helped me with this more than any other was Hieromonk Gabriel (Bunge)'s slim volume, Despondency: The Spiritual Teaching of Evagrius Ponticus on Acedia. Fr Gabriel ventures 'despondency' as a better translation of the Greek term than 'sloth', though he insists as well that 'repulsion, boredom, inertia, indolence, lassitude, dislike, [and] dejection' be retained as other possible shades of meaning. [2]

But more importantly, Fr Gabriel offers an Evagrian pathology of the vice which I did not recall having encountered previously. Two passages in particular struck me, one from Evagrius's commentary on the Psalms, and the other from his twenty-seventh epistle, neither of which to my knowledge has yet appeared in English translation. I shall quote both of them:

Acedia is a simultaneous, long-lasting movement of anger and desire, whereby the former is angry with what is at hand, while the latter yearns for what is not present. [3]

Alone among the thoughts this one is an 'interwoven' one, since it results from hatred and desire. A despondent person hates precisely what is available, and desires what is not available. [4]

Although the English terms 'anger' and 'desire' may at first appear deceptively simple, in Greek they are in fact technical terms with a long and venerable philosophical history. [5] Evagrius is describing acedia in terms of the traditional Platonic tripartite soul, made up of the logos, or intelligent aspect, the thymos, or irascible, incensive aspect, and the epithymia, the appetitive or desiring aspect--which C.S. Lewis simply calls the head, the chest, and the belly. [6] The chest begins to resent 'what is at hand', which is always of course that which has been given us for our salvation, and to wish for 'what is not present' or available. The resentment of the former produces the torpor or boredom, while the desire for the latter produces the restlessness of the traditional descriptions. This was the key, I realized, to explaining what seemed like contradictory symptoms--the lethargy and inertia on the one hand, and the restlessness and inability to stay put on the other.

It also helped me to see at last the relevance of acedia to life outside of 4th-century desert monasticism. It is perhaps more apparent to a teacher with a three-month summer vacation than to most. One sits at home, knowing that there is reading and lesson preparation that needs to be done to prepare for school, but one simply cannot do it. One scrolls through Facebook, occasionally refreshing it, but this is done in the most listless spirit and fails to give any real enjoyment. The only prospects that appeal at all are leaving the house, hanging out with friends, or watching movies or television. If none of these are pursued the likeliest result is falling asleep.

But then it becomes more apparent how pervasive this two-fold ailment is in our lives. We avoid the things we need to do, and seek out distractions among things we don't need. Kathleen Norris helped here. The noonday demon lurks in all of the quotidian tasks left undone, and all of the pointless ones pursued or dreamt of. Norris writes:

One of the first symptoms of both acedia and depression is the inability to address the body's basic daily needs. It is also a refusal of repetition. Showering, shampooing, brushing the teeth, taking a multi-vitamin, going for a daily walk, as unremarkable as they seem, are acts of self-respect. They enhance the ability to take pleasure in oneself, and in the world. But the notion of pleasure is alien to acedia, and one becomes weary thinking about doing anything at all. It is too much to ask, one decides, sinking back on the sofa. This indolence exacts a high price. [7]

I shall stop there for now. I plan to post more on this subject, particularly on the question of the relationship of acedia to depression, on its distortion of the true functions of the tripartite soul, and on its remedies, both patristic and more modern. In the meantime I suggest having a look at the descriptions in this post.

[5] They appear memorably in Republic 436a-b when Socrates asks, 'Do we do these things with the same part of ourselves, or do we do them with three different parts? Do we learn with one part, get angry with another, and with some third part desire the pleasures of food, drink, sex, and the others that are closely akin to them' (Plato, Complete Works, ed. John M. Cooper with D.S. Hutchinson [Indianapolis: Hackett, 1997], p. 1067)? Furthermore, I think they can safely be identified with the charioteer and the two horses of the soul in Phaedrus 246a (ibid., p. 524).

It seems like a strange oversight that in her book Deadly Vices Gabrielle Taylor completely misses this connection of acedia by definition to the tripartite soul. I would argue that it leads her to overemphasise the effect of acedia on the chest at the expense of the belly. It is identified too closely with mere sloth or indolence, and not at the same time with the longing for something else. Taylor also seems to see the traditional teaching on acedia too largely in terms of behaviours, right or wrong actions, rather than of disordered thoughts or states of the soul, an identification she then feels compelled to try to correct or deepen. (Gabrielle Taylor, Deadly Vices [Oxford: Clarendon, 2008], pp. 16-20) 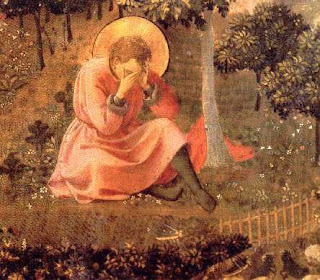 'Whatever else you may be doing, if you but fix your desire on God's sabbath rest, your prayer will be ceaseless.'

Posted by Aaron Taylor at 9:47 PM No comments: