'All Things That Are Done on Earth' -- Cicero's Somnium Scipionis 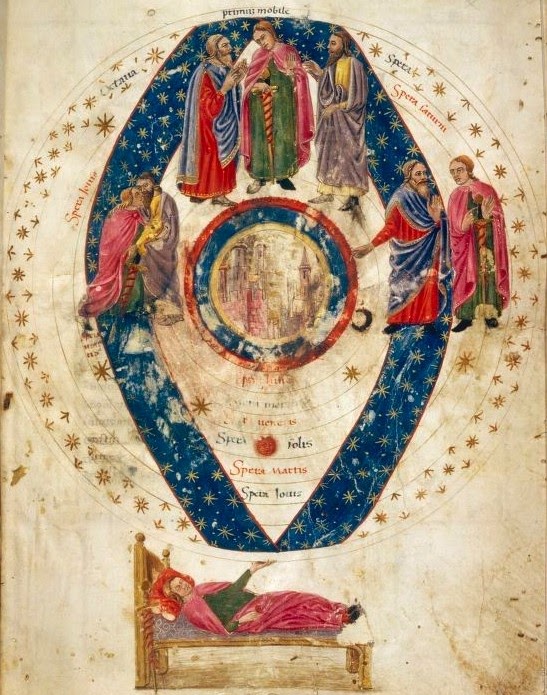 Although I still can’t recall what sparked the conversation in the first place, or what precisely got said on the subject in the second, a few weeks ago during #porchtime at my house some reference was made to Cicero’s now little-known ‘Dream of Scipio’, for centuries nearly the sole-surviving portion of a larger work, De Republica. [1] A very brief description was given for the benefit of those who had not read or heard of it, and a friend of mine who works as a curator of mediaeval manuscripts mentioned that her only familiarity with Cicero’s text was through the famed Late Antique commentator, Macrobius, whose commentary on Scipio helped to preserve the latter text throughout the Middle Ages as well as to insure its influence on the mediaeval worldview.


One of the more interesting questions to me with regard to Macrobius’s commentary on Cicero is the former’s interpretation of a single, at first quite plain passage in the original text. Having appeared in a dream to his adopted grandson, Scipio Africanus the younger, Scipio Africanus the elder tells him:

Every man who has preserved or helped his country, or has made its greatness even greater, is reserved a special place in heaven, where he may enjoy an eternal life of happiness. For of all things that are done on earth nothing is more acceptable to the Supreme God, who rules the whole universe, than those gatherings and assemblages of men who are bound together by law, the communities which are known as states. [2]

To the casual reader, it appears of course that Cicero is glorifying the political life of civil service, that of all human activities it is that which is highest and most pleasing to God. This is not of course the Christian view, but we do not expect Cicero to exhibit Christian views. Neither, however, is it the view of Late Antique pagans like Macrobius or the so-called ‘Neoplatonists’ (I shall leave aside for the moment the question of whether it is the view of earlier pagan philosophers before Cicero). For both Christians and Late Antique pagans, however they may differ on the details of what it might mean, the highest human activity is the contemplative, and the most divine life is the ‘philosophical’ one. [4] But Macrobius reveres Cicero [5] and holds him to be in essential agreement with himself and the later Platonic tradition, so he has to figure out what Cicero means here. Here is Macrobius’s conclusion:

Now if the function and office of the virtues is to bless, and, moreover, if it is agreed that political virtues do exist, then political virtues do make men blessed. And so Cicero is right in claiming for the rulers of commonwealths a place where they may enjoy a blessed existence forever. In order to show that some men become blessed by the exercise of virtues at leisure and others by virtues exercised in active careers, he did not say with finality that nothing is more gratifying to that supreme God than commonwealths, but added a qualification, nothing that occurs on earth is more gratifying. His purpose was to distinguish those who are primarily concerned with divine matters from the rulers of commonwealths, whose earthly achievements prepare their way to the sky. [6]

In other words, of ‘the things that are done on earth’, nothing of course is more pleasing to God than politics, but the contemplative, philosophical life is not really something ‘done on earth’. Since it lifts the mind and soul to God, it is a heavenly activity, not an earthly one. Macrobius refers to philosophers as ‘those who are primarily concerned with divine matters’, reminding us of the definition of philosophy of St Cyril the Apostle-to-the-Slavs: ‘Knowledge of things divine and human, as much as man is able to approach God, for it teaches man by deeds to be in the image and after the likeness of the One who created him.’ [7] Here is William Harris Stahl’s take on Macrobius’s interpretation:

Cicero implies in Scipio’s Dream that the efforts of statesmen and military leaders are most gratifying to the Ruler of the universe. Macrobius cites Plotinus’ treatise On the Virtues--although he is probably more dependent upon Porphyry--and points out that Plotinus admitted political virtues into his scheme. Political virtues have their rightful place, although they are not on as high a plane as the contemplative virtues. Hereupon it is revealed that this truth was apparent to the profoundly wise Cicero, for in his statement that ‘nothing that occurs on earth is more gratifying to that supreme God than the establishment of commonwealths’ the words on earth allude to the practical virtues and at the same time intimate that there are other types of virtues. [8]

C.S. Lewis says something very similar in his treatment of Macrobius in The Discarded Image:

What Cicero meant by his parenthetical reservation [quod quidem in terris fiat] I am not sure; probably he was distinguishing earthly affairs from the motions of the heavenly bodies, which God would undoubtedly prize more highly. But Macrobius (I, viii) regards this saving clause as Cicero’s way of leaving room for a whole system of ethics which Cicero might have strongly repudiated: a system which is religious, not secular; individual, not social; occupied not with the outer but with the inner life. [9]

Indeed, earlier in this section, Lewis had written, ‘Cicero, as we have seen, devised a heaven for statesmen. He looks no higher than public life and the virtues which that life demands.’ [10] But is this really quite fair? I’m no expert on Cicero, but recall that previously I left open the question of whether earlier philosophy had prized the active, political life quite as much as the Roman statesman appears to do here. I think I can confidently answer that in the negative. Plato certainly insists that the philosopher imitate the divine (Theaetetus 176 AB), and Aristotle finds that the ‘intellect’ is the highest and most divine faculty, and therefore that ‘contemplation’ is ‘the highest form of activity’ (Nicomachean Ethics 1177a). [11] We know that Cicero looked to the Greeks for his philosophical learning, and although the Roman mind is always noted for its practicality in comparison to the Greeks, it seems unlikely that Cicero would have directly reversed the judgement of the two greatest of the Hellenes. Is it possible Macrobius’s reading of Cicero is not so very far-fetched?

[4] In a passage I like to quote often from C.S. Lewis’s The Discarded Image: An Introduction to Medieval & Renaissance Literature (Cambridge: Cambridge U, 2002), he writes: A world-renouncing, ascetic, and mystical character then marked the most eminent Pagans no less than their Christian opponents. It was the spirit of the age. Everywhere, on both sides, men were turning away from the civic virtues and the sensual pleasures to seek an inner purgation and a supernatural goal. (47)

[5] Indeed, William Harris Stahl notes, ‘To Macrobius, Cicero is incapable of error; his wisdom, often concealed in subtle language, will be discovered upon careful examination of his words (or through the assistance of the commentator)’ (Macrobius, Commentary on the Dream of Scipio, tr. William Harris Stahl [NY: Columbia U, 1966], p. 14).