'the lady in mind had?' - Tolkien's Sir Gawain Translation 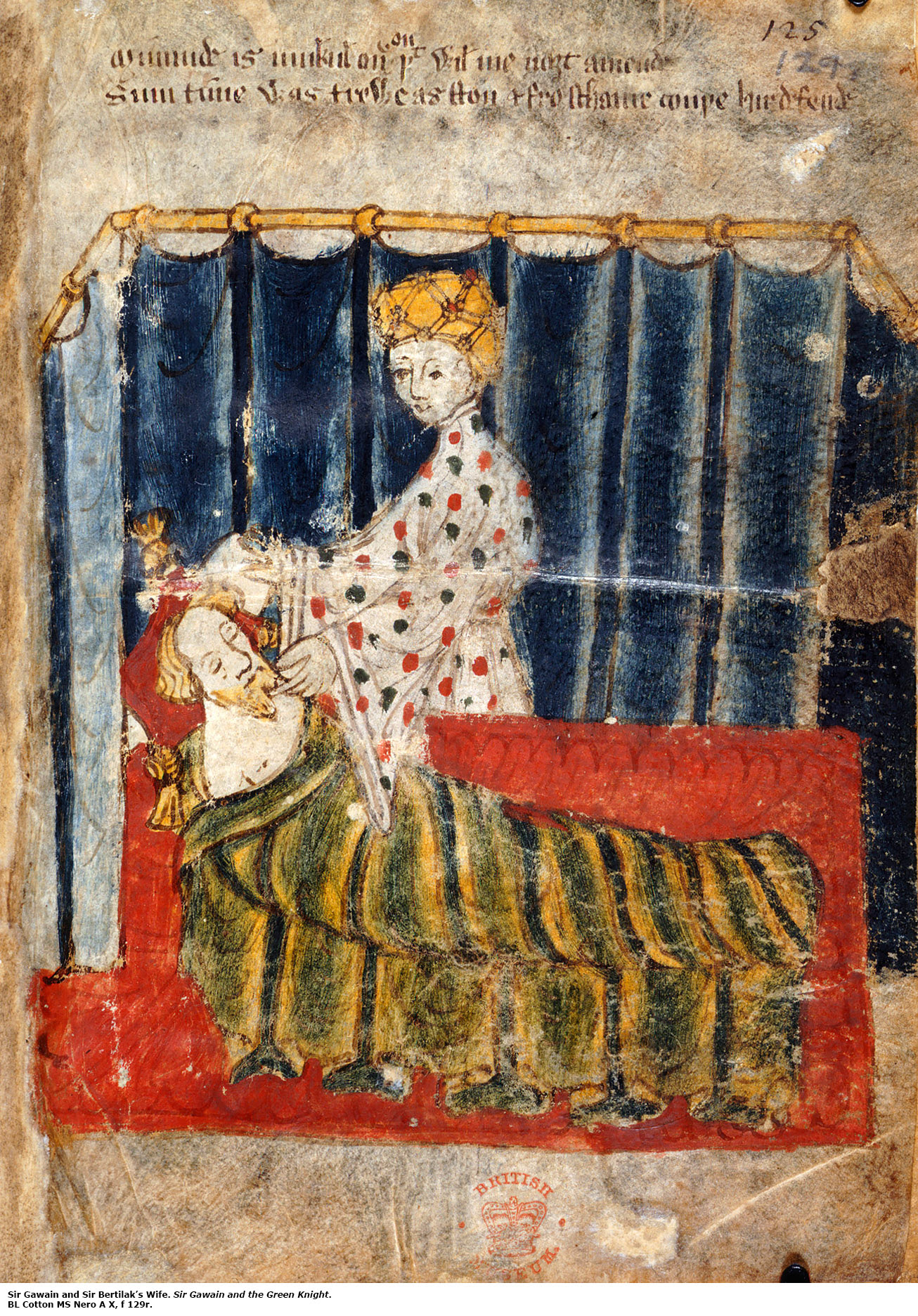 So I was recently rereading Tolkien’s translation of Sir Gawain & the Green Knight with my students, and I noticed an odd passage that I didn’t remember noticing when I’ve read it before (keep in mind that I’ve never read the poem all the way through in Middle English, and I’ve never read any translations but Tolkien’s). In the long third part, concerned with the alternating scenes of Bertilak’s hunting and his wife’s attempts to seduce Gawain, in stanza 51, at the conclusion of the first of these seduction attempts we read (lines 1283-1289): ‘Though I were lady most lovely,’ thought the lady to herself, ‘the less love would he bring here,’ since he looked for his bane, that blow, that him so soon should grieve, and needs it must be so. Then the lady asked for leave and at once he let her go. [1]

Now, this was odd, partly because it’s the only instance of a report of the lady’s point of view in the entire poem, but partly because even though it is not included within the quotations of the lady’s thoughts, that ‘since’ seems to suggest that she knows the nature of his appointment. Of course, she does know it, but we readers are not to know that until Part IV. It would seem like an uncharacteristic slip on the poet’s part.

Having noticed this, I immediately determined to check out the Middle English text as well as the other translation I possess--that by Marie Borroff (if I remember correctly, this was strongly recommended somewhere or other by David Lyle Jeffrey). I was of course fascinated to no end to discover that Borroff’s rendering of this passage was quite different indeed to Tolkien’s. Here are the same lines in her translation: For were she never so winsome, the warrior had The less will to woo, for the wound that his bane must be, He must bear the blinding blow, For such is fate’s decree; The lady asks leave to go;
He grants it full and free. [2]

Clearly, this was a more satisfying way of writing it. It avoids the switch in perspective of Tolkien’s, and it avoids the possible implication that the lady knows what Sir Gawain has come to do. But why are the two so different? And which one is correct?

Fortunately, I possess two editions of the Middle English text: Sir Israel Gollancz’s edition for the Early English Text Society, and the much newer one in Malcolm Andrew’s and Ronald Waldron’s invaluable The Poems of the Pearl Manuscript. Since there were no notes--apart from one indicating that in l. 1283, the manuscript has burde instead of the editor’s bur[n]e]--Gollancz’s alone did not tell me much that was helpful, lacking as I do a sound knowledge of the Middle English lexicon. [3]

Andrew and Waldron were quite helpful indeed, however. They follow the same reading that Gollancz does, with the ‘d’ of the MS replaced by an ‘n’. But they also have a longish note on the line. First, the lines in question: Þaʒ ho were burde bryʒtest þe burne in mynde hade, Þe lasse luf in his lode for lur þat he soʒt Boute hone-- [4]

‘though she may have been the loveliest lady the warrior had ever known (lit. remembered--cf. 943ff), he had brought with him so much the less love because of the penalty he was going to meet forthwith’. Morris’s emendations to 1283, which are adopted here (though with different punctuation), avoid the difficulty of the repeated burde as well as the momentary inconsistency of narrative point of view. The error could have arisen through misunderstanding of in mynde hade. G. Sanderlin (ChR, 8 [1973], 60-4) argues for retention of the MS reading despite the change of point of view. [5]

So, now I could see that the difference between Tolkien’s and Borroff’s translations definitely hinged on this question about the reading burne versus burde. According to Andrew’s and Waldron’s ‘Select Bibliography’, (Richard) Morris edited Sir Gawayne & the Green Knight for the Early English Text Society in 1864, and Sir Israel Gollancz revised this edition in 1897 and 1912 before producing his own edition in 1940. [6]

But I needed the editors’ handy glossary to be clear on precisely why such a small emendation made such a big difference. It turns out that while burde means ‘maiden, lady, woman’, burne on the other hand--listed under bu(u)rne, bourne, buyrne--means ‘man, warrior, knight’. [7] So the discrepancy stems from whether the MS is correct in reading ‘the lady in mind had’ or whether it should be ‘the knight in mind had’. Tolkien’s translation--made well after Richard Morris proposed the emendation followed by Gollancz, Andrew and Waldron, and Borroff--suggests that for some reason not mentioned in any of his comments on the poem that I have seen, the Professor sided with Sanderlin’s arguments for retaining the MS reading. [8] I for one don’t care for it much, but what do I know?