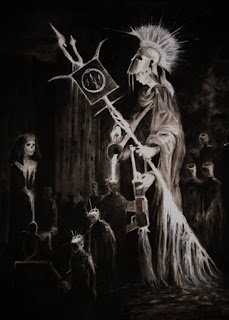 Motivated by a friend’s patently absurd claim that she didn’t need to read tragedies because she ‘had enough tragedy in her life’, I recently set myself the project of reading all of the surviving Greek tragedies. Of the many plays of Euripides still extant, I have only read Medea, Electra, and The Bacchae, but I have read all of the much shorter corpus by Aeschylus and have just recently completed that by Sophocles.

I had of course read the Oedipus trilogy long before, as well as Electra, but despite a fascination with the madness and shame of Ajax I only read that play on 23 May. [1] The next day I completed the final one, Trachiniae, or ‘The Women of Trachis’. Though I didn’t realize it till I began, this tells the story of the death of Heracles at the unwitting hands of his wife, Deianeira. It was a subject freshly on my mind, since on the 23rd I saw for the second time the striking horror film, Hereditary, in which there is a seemingly incidental discussion of Sophocles and the ‘tragic flaw’ of Heracles. (At this point, I should note that this post will contain spoilers of the film.) During the first of several scenes inside the character Peter’s classroom, we get the following exchange:

Teacher: So if we go by the rule that the hero is undone by his fatal flaw, what is Heracles’ flaw?

Bridget: Because he literally refuses to look at all the signs that are being literally handed to him the entire play.

Teacher: Okay, interesting! So he thinks he has control. But let's all remember: Sophocles wrote the oracle so that it was unconditional. Meaning Heracles never had any choice. Right? So, does this make it more tragic or less tragic than if he did have a choice?

Teacher: Care to weigh in, Peter?

Peter: Um … about which part?

Student: I think it's more tragic because if it’s all just inevitable, then that means that the characters had no hope, they never had hope, because they’re just like pawns in this horrible, hopeless machine. [2]

The discussion is of course beautifully germane to the plot of the film. Indeed, Peter’s failure to pay attention in class is itself an example of refusing ‘to look at all the signs that are being literally handed to him the entire play’. Heracles’s tragic end—to which T.S. Eliot famously refers as ‘The intolerable shirt of flame/Which human power cannot remove’ [3]—seems paralleled to some extent in the immolation of the family ‘patriarch,’ Steve Graham. (Steve suffers rather than acts throughout the film. The true agent is a matriarch—his mother-in-law, Ellen Taper Leigh.) The suffering of the Graham family too raises the question of the degree to which free will on the one hand or powerful forces beyond their control on the other have determined their fate at the end.

On the other hand, Trachiniae shows us very little of Heracles himself, instead focusing almost wholly on the figure of Deianeira. The student’s claim that the hero is given signs at which he refuses to look is largely the script-writer’s inference. The teacher’s statement about the oracle however is clearly borne out by the play. As stated by Deianeira near the beginning, the ‘sure oracles’—though disjunctive—are certainly unconditional:

That either he shall meet his death, or, having achieved this task [of subjugating Euboea], shall have rest thenceforth, for all his days to come. [4]

Indeed, while Heracles’s own account of the oracle at the end seems to reflect the original wording more closely, it is equally unconditional:

It was foreshown to me by my Sire of old that I should perish by no creature that had the breath of life, but by one that had passed to dwell with Hades. So I have been slain by this savage Centaur, the living by the dead, even as the divine will had been foretold.

And I will show thee how later oracles tally therewith, confirming the old prophecy. I wrote them down in the grove of the Selli, dwellers on the hills, whose couch is on the ground; they were given by my Father’s oak of many tongues; which said that, at the time which liveth and now is, my release from the toils laid upon me should be accomplished. And I looked for prosperous days; but the meaning, it seems, was only that I should die; for toil comes no more to the dead. [5]

Furthermore, it may be that the screenwriter of Hereditary had in mind this very statement of Heracles concerning his self-deception at the meaning of the oracles, since the grandmother of the film dies before attaining the material wealth she had hoped for from the demon, Paimon.

Trachiniae is not the only tragedy referenced in the film though. In the final classroom scene, the teacher stands before a chalkboard that reads, ‘Punishment brings wisdom’, and we hear him say clearly, ‘Iphigeneia’s murder was commanded by the gods,’ and some seconds later, ‘Clytemnestra was driven by revenge.’ The motto on the chalkboard seems to be an epitome of the final lines of Sophocles’s Antigone:

Great words of prideful men are ever punished with great blows, and, in old age, teach the chastened to be wise. [6]

While the doomed family of the film suffer a good deal of punishment, however, there are no ‘chastened’ left at the end to have learned any wisdom from it, and it’s hard for me to see any parallels in the film to Clytemnestra or a revenge motive. But the reference to the sacrifice of Agamemnon’s daughter, Iphigeneia, may well remind us of what we come to realise was a sacrifice of the Grahams’ daughter, Charlie.

That said, the most interesting thing to me in this particular classroom scene is the homework that can also be read on the chalkboard:

Proteus must be read and considered by Friday

As far as I know, no one else has noticed this assignment. The beautiful thing about this little reference is that while there was a real play by Aeschylus called Proteus—it was the satyr play that originally followed the Oresteia—it is no longer extant. Only a fragment (Fragment 119) has survived, preserved by the 2nd- to 3rd-century Greek rhetorician and grammarian, Athenaeus of Naucratis, in his Deipnosophists ix.50. Herbert Weir Smyth renders it as follows:

A wretched piteous dove, in quest of food, dashed amid the winnowing-fans, its breast broken in twain [7]

Proteus is known to have detailed Menelaus’s forced detour to Egypt on his way back from Troy in a divinely sent storm that came at night and, according to the Herald’s speech in Aeschylus’s Agamemnon, ‘when the sun came up again to light the dawn,’ discovered ‘the Aegean Sea blossoming with dead men.’ [8]

Upon tracking down this subtle reference, a viewer of Hereditary will be reminded of two things. First, the ‘wretched piteous’ bird puts one in immediate mind of the bird dashed against Charlie’s classroom window in an early scene. Charlie’s decapitation of the bird, however, is of course a foreshadowing of her own decapitation, and her use of the bird’s head to crown an artificially crafted figurine anticipates the use in the final scene of her own decapitated head to crown the idol of Paimon. Thus, the wreckage at night described in Agamemnon is paralleled by Charlie’s decapitation during the manic night drive, after which the first sunlit scene shows a very graphic view of the bloody head lying in the road where Peter left it.

It should be obvious from all of this that what we think of as a ‘horror film’ in this case has many parallels and resonances with classical Greek tragedy, culminating in the very notion of the grandmother’s evil visiting her children and grandchildren and the question of the family’s free will versus their manipulation by a demonic conspiracy. One is reminded of Hyllus’s indictment of Zeus and the gods at the end of Trachiniae:

…And grant me full forgiveness for this; but mark the great cruelty of the gods in the deeds that are being done. They beget children, they are hailed as fathers, and yet they can look upon such sufferings.

No man foresees the future; but the present is fraught with mourning for us, and with shame for the powers above, and verily with anguish beyond compare for him who endures this doom.

Maidens, come ye also, nor linger at the house; ye who have lately seen a dread death with sorrows manifold and strange: and in all this there is nought but Zeus. [9]

Thus Zeus, who is himself the Sire of which Heracles had spoken, is ‘hailed’ as father just as Paimon is literally ‘hailed’ by his followers. But it is his own cruelty and will—like that of the old witch in the film, grandma Ellen—that has wrought all the suffering Zeus’s son, daughter-in-law, and grandson have endured.

Still, there is one important difference between our film and a Greek tragedy, even with all the latter’s admitted gore. Unlike the great tragedies, the conventions of the modern horror genre take little to no consideration of Horace’s famous rules about the depiction of horror on stage:

But you will not bring on to the stage anything that ought properly to be taking place behind the scenes, and you will keep out of sight many episodes that are to be described later by the eloquent tongue of a narrator. Medea must not butcher her children in the presence of the audience, nor the monstrous Atreus cook his dish of human flesh within public view, nor Procne be metamorphosed into a bird, nor Cadmus into a snake. I shall turn in disgust from anything of this kind that you show me. [10]

I feel certain that many cinema-goers did just this at the trauma of Charlie’s head colliding with the telephone pole in Hereditary.

[1] It was Rosemary Suttcliff’s Black Ships Before Troy that sparked my interest in Ajax.

[2] I found the transcription here.

[9] Sophocles, p. 181. Sophocles’s lines seem to me to echo the famous opening sentence of the Iliad:

Rage—Goddess, sing the rage of Peleus’ son Achilles,
murderous, doomed, that cost the Achaeans countless losses,
hurling down to the House of Death so many sturdy souls,
great fighters’ souls, but made their bodies carrion,
feasts for the dogs and birds,
and the will of Zeus was moving toward its end.