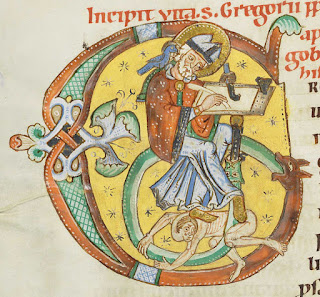 In large part because of my great devotion to St John Cassian and his writings, I have long taken a keen interest in the 4th- to 5th-century ‘Anthropomorphite-Origenist’ controversy in Egypt, and for the same reason I have for the most part tended to identify heavily with the ‘Origenist’ side of the controversy. St Cassian’s points in Conference 10 in fact seem fairly uncontroversial, and the ‘anthropomorphite’ position seems fairly indefensible from an Orthodox perspective.

This view was beautifully complicated for me by Bishop Alexander’s contribution to the festschrift for Metropolitan Kallistos (Ware)—‘The Vision of God & the Form of Glory: More Reflections on the Anthropomorphite Controversy of AD 399’ (see an earlier contribution by His Grace to the subject here). While I definitely appreciated His Grace’s ‘final word’ attempting to ‘make up a little for the injustices I may have done a Cassian, an Origen, or an Evagrius in the course of making my argument’ [1], I also appreciated in a different sense his main argument that the simplistic ‘Serapion’ of Conference 10 may not be entirely representative of the anthropomorphites themselves or of their position.

Well, today I was finally getting round to reading Tim Vivian’s introduction to his little volume for the SVS Popular Patristic Series—Four Desert Fathers: Pambo, Evagrius, Macarius of Egypt & Macarius of Alexandria. Vivian—in his discussion of Evagrius’s emphasis on imageless prayer and its possible role in the controversy—seems to hold a nuanced understanding of the controversy very similar to that of Bishop Alexander and informed by some of the same sources. Among others, he also refers to an essay by Fr Georges Florovsky that I don’t believe I have yet read myself entitled ‘Theophilus of Alexandria and Apa Aphou of Pemdje’. Vivian quotes Fr Georges’s explanation of the position of one of the ‘anthropomorphites’:

The sting of his argument was directed against the denial of God’s image in man, and there was no word whatever about any ‘human form’ in God. Aphou only contended that man, even in his present condition and in spite of all his misery and destitution, had to be regarded still as being created in the image of God, and must be, for that reason, respected. Aphou was primarily concerned with man’s dignity and honor. Theophilus, on the other hand, was embarrassed by man’s misery and depravity. [2]


I found this connection between the anthropomorphites’ emphasis on the imago Dei in man and the Origenists’ rejection of an imago hominis in God particularly interesting in light of something I had just read this morning in an author rather far removed in time and place from the controversy: St Gregory the Great. In his Homilies on Ezekiel, St Gregory links the human soul and God Himself in the process of mystical ascent, describing a kind of likeness between the two, but specifically rejecting the conception of not only the latter but of the former in terms of images. I shall quote this passage at length:

For we often wish to ponder the invisible nature of Almighty God but by no means avail, and the soul, wearied by the very difficulties, withdraws into herself and makes for herself and from herself the steps of her ascent, so that she first considers herself, if she can, and then examines insofar as she can that nature which is above her. But our mind, if spread out in carnal images, by no means suffices to consider itself or the nature of the soul because it is led by as many thoughts as it is, so to speak, blinded by obstacles. [3]


It is then that St Gregory begins to discuss precisely how God and the soul are connected and why they must both be approached without images. In the next passage the ellipses indicate where I have attempted to shorten the quote without, I hope, obscuring the argument.

9. Then the first step is to compose oneself, the second to see the like of this composure, the third to rise above oneself and by intention submit to the contemplation of the invisible Creator. But one by no means composes himself unless he has first learned to curb the apparitions of earthly and heavenly images from his mind’s eye and cast out and tread down whatever of sight, hearing, smell, touch and taste occurs to his bodily thought, in order that he may inwardly seek such as is free thereof….Then all things are to be driven away by the hand of discernment from the mind’s eye so that the soul may regard herself as she was created, above the body but below God, so that being quickened by her superior she may quicken the inferior which she administers….And when she performs such different actions through the senses she arranges them not by a diversity, but by that one reason in which she was created. When therefore the soul thinks of herself without bodily images she has already entered the first door. But this door leads on to the other in order that something from the nature of Almighty God may be contemplated. So the soul in the body is the life of the flesh, but God Who quickens all is the life of souls. Then if the quickened life is of such magnitude that it cannot be comprehended, who avails to comprehend with his understanding how great is the majesty of the Life which quickens? But the very consideration and discernment thereof is already to enter to some extent, because from her appraisement the soul gathers what she perceives of the uncircumscribed Spirit which incomprehensibly rules those things which He incomprehensibly created. [4]


Now, this is a very difficult passage, in part because St Gregory seems to be speaking of a lofty mystical experience which most of us have not shared. But I note that even in speaking of what one might call the contemplation of one’s own soul, he teaches that images must be driven out. The necessity of imageless contemplation of God, then, is even greater, for if the creature is incomprehensible, how much more the Creator?

What’s interesting to me about this is that it clearly appears to belong to the Origenists’ tradition (I’d be interested to see research on what St Gregory knew of Origen and Evagrius), and yet it does not—as one might expect from the quoted passage from Fr Georges’s essay—deny the imago Dei in man. Indeed, St Gregory seems to make much indeed of the divine image in the human soul—ascribing to it the very incomprehensibility that for the Origenists required the cultivation of total imagelessness in prayer to its divine Prototype.