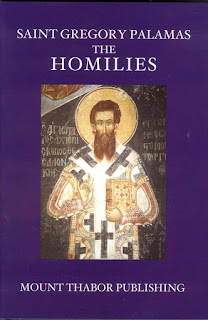 Owing to popular demand—okay, two people—I have decided to post my 2011 review of the English translation of St Gregory Palamas’s homilies from Orthodox Life. So this is that.

The last fifty years or so have seen a growing interest in St Gregory Palamas in the English-speaking world. But because professional theologians and patristic scholars have led that interest, much of it has focused on St Gregory’s polemical and theological works, and these works have been the primary object of translation efforts into English. Such translations are undoubtedly important: they have led to marked Western reevaluations of St Gregory’s teaching and have become a source of theological enrichment for Anglophone Orthodox readers.

But a translation of St Gregory’s extant homilies has been long overdue, and Mount Thabor Publishing it to be roundly applauded for producing this beautifully bound, hardcover edition of all sixty-three of them. Devoted to the Great Feasts and Sunday Gospel readings of the Church year, the homilies have the potential to serve as a real aid to the spiritual life. It is here that we see St Gregory Palamas as the great pastor of the Church that he was, and it is here that Orthodoxy laymen of the English-speaking world, especially converts, will find a proper point of contact with the saint’s teaching. These homilies were given to provide spiritual nourishment to Orthodox Christians living in the world, who did not necessarily grasp the Aristotelian subtleties of theological polemic and whose experience of the spiritual life had not yet risen to the heights attained by monastic hesychasts. These homilies feed the souls of working men and women. In them we see St Gregory ‘rightly dividing the word of truth’.

That is clearly not to say, however, that this translation will hold no interest for the scholar or theologian. The homilies are, as one would expect, models of theological oratory and patristic exegesis, and afford a fascinating glimpse into the religious life at the height of the Palaiologan Renaissance. To aid the scholarly reader, this edition contains extensive endnotes (continuously numbered) that often provide lavish quotations from the Greek, besides offering deeper insights into St Gregory’s theology. There are also indexes of Scriptural references, of names and subjects, and of Greek words, all of which greatly increase the book’s value as a reference tool.

The initial labour of this translation was undertaken at the Monastery of St John the Baptist in Essex, England, by Sister Pelagia (Selfe) under the direction of Archimandrite Zacharias (Zacharou), being finally revised and furnished with notes by Christopher Veniamin of St Tikhon’s Orthodox Theological Seminary in South Canaan, PA. Sr Pelagia and Dr Veniamin should be commended for their very readable and elegant rendering. The cover price may seem a bit steep, but it is well worth it for a treasure of this magnitude. Perhaps my only complaint is the editor’s decision to use the Masoretic names and numbering for Scriptural citations. But such a quibble should hinder no one from acquiring this important volume. Let us, as St Gregory says, open our ‘ears to the Spirit’s teaching and be persuaded by what we preach and put forward to you for the good of all’ (Homily 56.3).