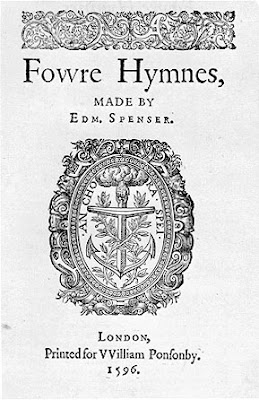 In the spirit of my post, ‘Stuff about Words & Things’, wherein I pointed out, ‘What is obvious or well-known to one person, even a very little thing, may be totally new to someone else’, I offer this post on the interesting word, ‘Godhead’. Many readers may already be aware of the etymology of this word, and I ask that these bear with me. I myself have just learned something quite new about my language.

The occasion was this. I was reading Edmund Spenser’s ‘An Hymne in Honour of Love’ in a delightful red pocket edition (in the ‘Pitt Press Series’) of The Fowre Hymnes edited by Lilian Winstanley and printed in Cambridge, ‘at the University Press’, in 1930. Here is the third stanza (ll. 15-21):

Onely I feare my wits enfeebled late,
Through the sharpe sorrowes which thou hast me bred,
Should faint, and words should faile me to relate
The wondrous triumphs of my great god-hed:
But, if thou wouldst vouchsafe to overspred
Me with the shadow of thy gentle wing,
I should enabled be thy actes to sing. (p. 2)

Now, I wasn’t looking especially for notes on this stanza, just looking over the notes for the first ten stanzas or so generally, when I found the following enlightening comment:

You see, I had always assumed that the ‘-head’ portion of ‘Godhead’ was related somehow to the usual English word ‘head’. The A.-S. form of the latter, however, is heafod, meaning ‘head’, but also ‘source, origin’, according to J.R. Clark Hall, A Concise Anglo-Saxon Dictionary (Toronto: U of Toronto, 1996), p. 170. The former, had, is defined on the other hand as ‘person’, ‘degree’, or, more to our purposes, ‘condition, state, nature, character, form, manner’ (Clark, p. 164).
Posted by Aaron Taylor at 10:05 PM

Woohoo! I'm smarter now than when I got up this morning. Thanks!

On the german "heit" see:

Here is a rough translation of something the second article in the german wiki says about "heit":

Thomas> Thank you for this illuminating comment. I hadn't even thought of the German -heit (Swedish is a bit off my radar!). I was especially interested to see the Gothic cognate!

Each of us holds a world of knowledge that another can benefit from.

I, for instance, was surprised that you hadn't know of Jebel Harun and its shrine, and the Wadi Musa, and the setting of the Kadesh Barnea of the Biblically-described wanderings of Israel in that place we now know as Petra in Jordan--a very ancient tradition.

So now I wonder what else is rattling around in the grey-celled attic that might prove useful for others....

Yes, Kevin, one of your 'worlds of knowledge' is the topography of the Holy Land, whereas I know next to nothing about that. In the case of Jebel Harun, I simply assumed no one knew what had become of him, so I didn't bother digging into it!

Anyway, I consider one of the primary purposes of a blog to be getting those rattling objects out of the grey-celled attic and into a more useful format. Dazzle us!