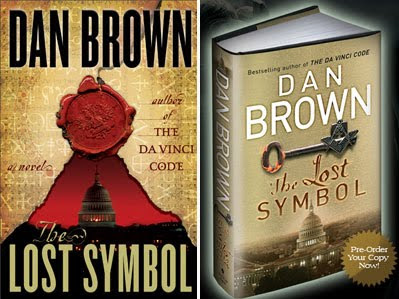 This morning I received some disturbing intelligence (HT Athos-Agion Oros): the most overrated writer of our day, the unfortunate Dan Brown, has suggested through a photo on Twitter that his new book may have something to do with the Holy Mountain, Mount Athos. Although the novel, entitled The Lost Symbol, is said to be set during a 12-hour period in Washington, DC, a photo intended as a teaser for fans clearly shows the Monastery of Simonopetra (it can be viewed at the Athos blog—please don’t add traffic to the Twitter page!). The prominent Masonic symbol on the cover of the book leads one to wonder if perhaps the Patriarchs Meletios (Metaxakis) or Athenagoras (Spyrou) of Constantinople, both reported Masons, may figure in to the plot somehow! More information can be found in this article, courtesy of the Telegraph.

Considering Brown’s clumsy handling of history, art, and architecture, and his particular delight in distorting Church history and attacking any kind of traditional Christian faith, this is an ominous development. Despite his frequent claims to do intense research for his books, I myself have pointed out one of the author’s many gross errors (perhaps mixed with outright lies) in this post. I’m afraid there is only more to come. Furthermore, while Brown has obviously spread a tangled web of seriously mistaken beliefs about the early Church, in the past it has been the Roman Catholics that have borne the brunt of his campaign of misinformation. It is troubling to see that we Orthodox may be explicitly dragged into it as well.
Update: I am relieved to note that Bishop Savas of Troas has informed me that there appear to be no references to the Holy Mountain in The Lost Symbol. The question of why Brown or his publisher would post a photo of an Athonite monastery remains unanswered however. Perhaps it was merely a deliberate red herring!
Posted by Aaron Taylor at 4:32 PM

I am not suprised that the under-current agenda of the anti-christ has now turned its public force towards Orthodoxy ... it had to break society and the Roman Catholics first (success in many ways) now they can confidently turn to Orthodoxy.

It is all part of the eschata and doesnt suprise me or should suprise anyone in Orthodoxy one bit.

I tried to post your blog article on a forum. I received a private message from one of the priests telling me that this is a work of "fiction" and that as such there should be no concerns ...

I completely agree with your assessment of the situation. It's too bad that even priests are buying the notion that because these books are 'fiction' they can do no harm. Many people now believe that the lies about Christ and the version of Church history presented in The DaVinci Code are true. It is not difficult to verify this.

If these things really were presented as fiction, that would be one thing. But Brown tries to convince people that the background of his novels is historically accurate. The priest who told you 'there should be no concerns' has apparently not spoken with actual, everyday people outside of the Church about these books.

Forgive my poor writing skills I am not very strong in it and forgive my forwardness, also.

The way my instinct is driving me is that of late (and I mean only the last couple of years) I have noticed a clear distinction within Orthodoxy ... this is how I categorise the two - there are the "Byzantine" minded Orthodox and then there are not ...

It is the those who are Byzantine that see "everything" in light of its "spiritual" implications ... it takes invisible eyes to see the invisible consequences.

This is a sad reality. There are many who call themselves Orthodox and they are but they do not have that "old fashoined" mentality that "guarded" the inside of Orthodoxy from the outside.

and PS, the priest in question, though he is a lovely priest and is very much Orthodox in his repentance ... also believes it is acceptable and ok for Orthodox to be reading Harry Potter ... the reasoning behind this is that by forbidding children to read this fiction somehow "removes them" from society and the ability to interact with society ...

I see his point ... on the other hand, all it takes is a small piece of dirt to slip into a tiny little crack of a concrete slab ... and with a little bit of weathering sure enough ... in time, you have concrete cancer which utterly destroys your slab and the stability of whatever it is it is supporting.

I hope I don't disappoint you, but in my opinion, Harry Potter is, like most novels, a mixed bag, and not a direct communique from hell. This is a controversy I was really hoping to avoid on this blog, but since you brought it up, I feel like I have to be honest about my position. I realise there are many Orthodox, some of whom I am close to, who believe that these books are purely evil, and I respect those who believe this. But I disagree, and actually think that there is much good in them. I myself read the books in order to understand them better, and I think they've been attacked on the basis of a superficial impression. The 'magic' is only a gimmick, and the real point of the stories is not relying on oneself (but trusting in one's 'spiritual father'), resisting the forces of evil, learning to love our enemies, and the power of Resurrection. A number of Orthodox, even very traditional ones like myself, are starting to figure this out. In fact, while we're on the subject of the eschata and the 'agenda of the anti-christ' as you called it, I happen to believe that there are a number of things in these books that could potentially help to prepare young people to face the last days. They obviously shouldn't replace the Scriptures and the Lives of Saints, and they should not be read without guidance or by just anyone. But no books fit such a description!

I don't mean to scandalise anyone, and I admit that when we are dealing with novels there is always the potential that they will not have a good effect. Discernment must be practiced in choosing and reading them. But I believe that given these qualifications, it is possible to read Harry Potter profitably. If the Fathers can recommend the reading of and argue that it is possible to get moral benefit from the Iliad, where the heroes become possessed by the false demonic 'gods' of heathen religion, then surely the same can be said of Rowling's books!

A few critics have attacked them as poor literary specimens, and I can sympathise with this view even more. Despite the great length of the later novels, Rowling mostly writes in the typical clipped style of the mass-market thriller, a style which I feel has no literary merit. But I think C.S. Lewis's isolation of the mythopoeic gift from literary ones applies in this case. Rowling is the H. Rider Haggard of our day!

The sad thing is that such books have the most impact in places like Turkey, where they confirm Muslim superstitions about Christianity.

I believe that Christians should not buy Dan Brown's new book titled "The Lost Symbol," because of Brown's distorting Church history in the past, and attacking traditional Christian faith.

If enough people boycott this book, Brown will probably be discouraged from writing other books in the future.

Gina> That is unfortunate indeed, but they have a great impact on ignorant Americans and Europeans as well. So few people known anything about history, particularly Christian history, that they'll believe just about anything as long as it gels with liberal views.

George> I entirely agree. I believe no one should buy this book. I'm not sure if it will make a difference, but it's the principle of the thing that counts.

Indeed the picture of I.M. Símonos Pétras on the Holy Mountain must be a deliberate red herring. This week the translation into Dutch of Browns book has been published. In a recent interview the author said he even showed up, while writing his book, in cities that don't have any relation with the story of his book, to mislead the public about the theme. About this picture you may say the same I think.