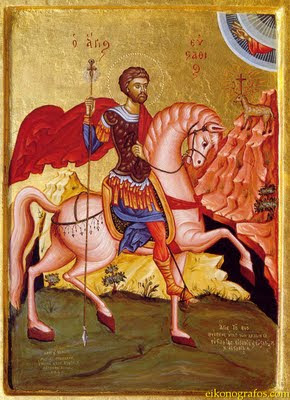 Today, 20 September on the Church’s calendar, we celebrated the memory of the Holy Great-martyr Eustathius (Eustace) Placidus, his wife Martyr Theopiste, and their children, Martyrs Agapius and Theopistus, of Rome (118). Here is the account of their life and martyrdom in the Prologue (St Nicholas [Velimirović], The Prologue from Ochrid, Vol. 3, trans. Mother Maria [Birmingham: Lazarica, 1986], pp. 352-3):

He was a great Roman military leader in the time of the Emperors Titus and Trajan. Although a pagan, Placidus (for that was his pagan name) was a righteous and merciful man, like the centurion Cornelius, who was baptised by the Apostle Peter (Acts 10). Going hunting one day, he found a stag. By the providence of God, a shining Cross appeared among the stag’s antlers and the voice of God came to Placidus, telling him to go to a Christian priest and be baptised. Placidus was baptised, along with his wife and two sons. At his baptism, he received the name Eustace, his wife the name Theopiste and their sons the names Agapius and Theopistus. After his baptism, Eustace went back to the very place where the revelation through the stag had occurred, and thanked God on his knees that he had brought him to the truth. At that, the voice of God came to him again, foretelling suffering for His name and strangthening him. Then Eustace secretly left Rome with his family, with the intention of hiding among simple people and serving God in an unknown and humble way. Arriving in Egypt, he was immediately beset by trials. Some wicked barbarian carried off his wife, and his two sons were seized by wild beasts. But the barbarian quickly came to a bad end, and a herdsman saved the boys from the wild beasts. Eustace settled in the Egyptian village of Vadisis, and there lived as a village hireling for fifteen years. After this, the barbarians descended on the Roman Empire, and the Emperor Trajan was sorry that his brave commander Placidus, who had been victorious wherever he had fought, was not with him. The Emperor sent two of his officers to seek the great general throughout the Empire. By God’s providence, these officers, who had been friends of Eustace, came to this village of Vadisis, found him and took him to the Emperor. Eustace gathered the army together and defeated the barbarians. On the way back to Rome, Eustace went and found his wife and sons. When he arrived in Rome, the Emperor Trajan had died and the Emperor Hadrian was on the throne. When Hadrian summoned Eustace to offer sacrifice to idols, Eustace told him that he was a Christian. The Emperor put him to torture, together with his wife and sons. When the wild beasts did them no harm, he threw them into a white-hot metal ox. On the third day, they took out their bodies, dead but untouched by the fire. Thus this glorious general gave to Caesar that which is Caesar’s, and to God that which is God’s, and entered into the eternal Kingdom of Christ our God. 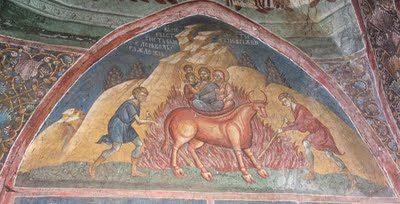 According to the Synaxaristes compiled by Fr Macarius of Simonopetra, Christ’s words to the Martyr when he saw the stag were, ‘Placidus, dost thou hunt me down? I am Christ whom thou dost honor unbenknownst to thee by thy good works. Since I have come down to earth and taken human form to save the race of man, I appear unto thee this day in order to capture thee in the nets of my love for mankind’ (qtd. in David and Mary Ford, Marriage as a Path to Holiness: Lives of Married Saints [South Canaan, PA: STS, 1994], pp. 17-8). After the martyrdom of the family, the Fords conclude:

Thus, their earthly joy at being reunited, after so many years of separation, was swiftly succeeded by the eternal joy of being received together into Heaven as holy martyrs for Christ—in company with their two sons, who are also honored in the Church on this day as Martyr-Saints. (p. 18)

It is interesting to note, as Wilson’s Blogmanac does in the entry for 20 September here, that at least one other Saint is said to have had precisely the same experience with a stag—St Hubert (Hubertus) of Liege (†727). It is the association of this story with St Hubert that led to his rôle as patron of hunters in the West, and in turn to the use of the stag with the cross as the logo of the popular liqueur Jägermeister, ‘Hunt-master’. (It is also worth pointing out here the lovely verses from Oskar von Riesenthal’s Waidmannsheil printed around the outer edge of the Jägermeister label [translation taken from the Jägermeister website]:

It is the hunter’s honour that he
Protects and preserves his game,
Hunts sportsmanlike, honours the
Creator in His creatures.)

There is a fascinating two-part article on Western European hunt traditions, including the story of St Hubert and his patronage, here and here, by the eccentric Catholic traditionalist Charles A. Coulombe. Futhermore, here is the account of St Eustace in the Golden Legend of Jacob de Voraigne.

I also recall with affection the strange sight that greeted me as I first walked through the gate into the cloistered portion of Ss Cyprian and Justina Monastery in Fili, Greece, and discovered a life-sized plastic stag bearing a crucifix between his antlers standing on the lawn of the courtyard. There was also a lovely icon of St Eustace in the daily chapel used by the Fathers, and when I mentioned—without skepticism, but obviously interested in what he had to say—the fact that the same story was told of St Hubert, Bishop Ambrose of Methoni replied in a very British way, ‘Well, it wouldn’t be surprising if the same thing happened to them both!’ (I should point out however that the association of this event with St Hubert is said to be very late.)

In conclusion, I offer the ‘Hymn of Praise’ for St Eustace from the Prologue:

Eustathius, a wonder among generals,
Gave his life for the Living Lord.
Authority and glory and royal honor
He discarded as refuse and chaff,
For the sake of Christ, the Immortal King,
For the sake of true eternal life.
When the voice of Jesus greeted him,
He was infused with ardent love
For Christ the All-glorious God-
The All-glorious Lover of Mankind.
That voice remained deep in his soul,
And the world could not drown it out;
And the radiant cross which the general saw,
Never left his soul.
The Cross gave him wondrous fearlessness.
The Cross saved him from the enemy's power,
And saved his spouse, faithful as a rock,
And his children, heroic and virtuous.
Eustathius gave his body over to the fire,
And his blessed spirit to the Lord.
O Eustathius, glorious martyr,
Invincible soldier of Christ,
Help and strengthen the Church of God
That the malicious demon not slander it.
Let the Church shine as a star,
And glorify her Sun, Christ.

It's been at least 20 years since I paused to ponder the cross in the stag's antlers on a bottle of Jägermeister. I must confess I never had any clue about the symbolism.

Saints Eustace and Hubert, pray for us!

Glory to God for all things!

Fr Mark> You have no idea how happy I am to hear from just one reader who didn't know about the Jägermeister label! Score!