'The Namesake of Blessedness'—St Benedict Biscop 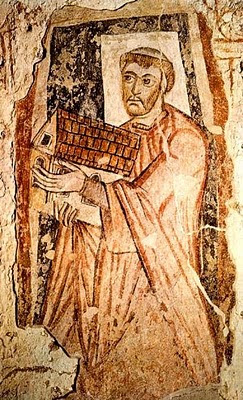 Today, 12 January on the Church’s calendar, we celebrate the memory of the Holy Benedict Bischop (628-690), Abbot of Wearmouth and Jarrow, Northumbria, England. The great historian, Christopher Dawson, observes that St Benedict, ‘above all, devoted himself to the development of religious art and learning’, [1] and The Oxford Dictionary of Saints describes him as ‘founder and first abbot of Wearmouth, scholar, and patron of the arts’. [2] Here is the account of his life in the 2010 St Herman Calendar:

St Benedict Biscop was born in Northumbria of a Christian family. He made numerous pilgrimages to Rome, later spending two years taking monastic instruction at Lerins, from 665 to 667, where he was tonsured with the name ‘Benedict’ (blessed). He accompanied St Theodore of Tarsus, the Greek archbishop, back to Canterbury, where Benedict was appointed abbot of the community of Sts Peter and Paul. He was invited by King Egfrith to build a monastery at Wearmouth in 674, and later erected a sister monastery at Jarrow. St Benedict made his final trip to Rome in 679 to bring back holy books and relics, as well as masons and craftsmen for the completion of the monasteries, creating a dual community which was to serve as a model for monastic life in England. He died in 690, surrounded by his monastic brethren, and was succeeded as abbot by St Ceolfrith (Geoffrey), who continued his spiritual work. [3]

Of St Benedict’s blessed repose, his most renowned disciple, the Venerable Bede, writes, ‘Benedict, who so nobly vanquished sin and wrought the deeds of virtue, yielded to the weakness of the flesh, and came to his end. Night came on chilled by the winter’s blasts, but a day of eternal felicity succeeded, of serenity and of splendour.’ [4]

Aside from the full account of his life I have just quoted, The Lives of the Abbots of Wearmouth & Jarrow, St Bede also speaks movingly of his spiritual father in his homily for today. It is good and just that St Benedict is so often praised for his liturgical and aesthetic enrichment of the English Church, and even for the enormous library he bequeathed to English monasticism (see for instance, my post last year). But in this passage, commenting on the verse ‘And everyone who has left house or brothers or sisters or father or mother or wife or children or lands for my name’s sake will receive a hundredfold, and will come into possession of eternal life’ (Mt 19:29), St Bede reminds us that St Benedict left an even more important legacy in the people that he brought together and guided to Christ: 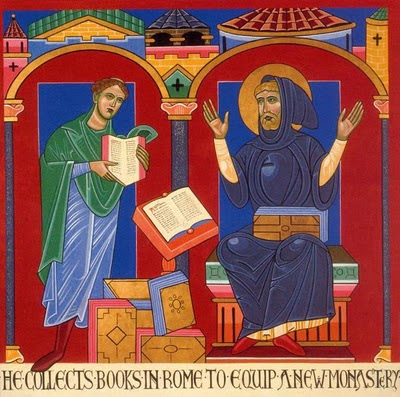 And it should not seem tedious to any of you, brothers, if we speak of things which are well-known, but instead you should judge it delightful that we speak the truth when we tell of the spiritual deeds of our father, to whom the Lord by a manifest miracle fulfilled what he promised to his faithful ones, that ‘everyone who has left home or brothers etc. . . .’ He left his relatives when he departed from his fatherland; he received a hundredfold, for not only was he held in deserved veneration by everyone in this land, on account of the diligence of his virtues, but even in Gaul, and in Italy, in Rome too, and in the islands of the sea, he was loved by everyone who was able to know him . . . The homes and lands which [Benedict] had possessed he left for the sake of Christ, from whom he hoped to receive the land of an ever-verdant paradise, and a home not made by hands but eternal in heaven. He left wife and children—not, to be sure, that he had taken a wife, and had children born of her, but out of love of chastity he scorned taking a wife from whom he could have children, preferring to belong to that hundred and forty-four thousand of the elect who sing before the throne of the Lamb a new song which no one except they can sing. . . . He received home and lands a hundredfold when he secured these places where he would build his monasteries. He gave up having a wife for Christ’s sake, and in this he received a hundredfold, because undoubtedly then the value of charity between the chaste would be a hundredfold greater on account of the fruit of the Spirit, than that between the lascivious, on account of the desire of the flesh, had once been. The children which he had disdained to have in a fleshly way he deserved to receive a hundredfold as spiritual children. The number one hundred, indeed, as has often been said, figuratively speaking, denotes perfection. Now we are his children, since as a pious provider he brought us into this monastic house. We are his children since he has made us to be gathered spiritually into one family of holy profession, though in terms of the flesh we were brought forth of different parents. We are his children if by imitating [him] we hold to the path of his virtues, if we are not turned aside by sluggishness from the narrow path of the rule which he taught. [5]

In conclusion, here is the doxasticon at the end of Matins from Reader Isaac Lambersen’s Akolouthia for St Benedict Biscop (here):

Come, ye Christians of these latter times, and though lacking in all zeal and every virtue, let us praise the venerable Benedict, the namesake of blessedness, who, having toiled unceasingly for his Master, hath received from Him the promised reward for his faithful service, and dwelleth now in the habitations of the just, from whence he sendeth aid upon the wretched and afflicted, and by his mediation obtaineth for us the remission of sins and great mercy.

The contemporary icon immediately above is by Peter Murphy, whose work can be seen here.