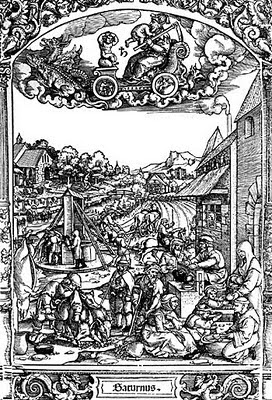 As will have been noticed, line 6 of Virgil’s Fourth Eclogue contains the statement redeunt Saturnia regna, ‘Saturn’s rule returns’ in Lee’s simple translation. [1] Dame Frances Yates comments, ‘The poets taught . . . that justice reigned in the golden age of Saturn and left the earth.’ [2] Therefore, the return of Justice—Virgo—means the return of Saturn. The mythology to which Virgil refers, of the Golden Age and its end, can be found in Ovid’s Metamorphoses 1.89-124. Here are a few pertinent lines:

First to be born was the Golden Age. Of its own free will,
without laws or enforcement, it did what was right and trust prevailed.
. . .
Spring was the only season. Flowers which had never been planted
were kissed into life by the warming breath of the gentle zephyrs;
and soon the earth, untilled by the plough, was yielding her fruits,
and without the renewal the fields grew white with the swelling corn blades.
. . .
When Saturn was cast into murky Tartarus, Jupiter seized
the throne of the universe. Now there followed the age of silver,
meaner than gold but higher in value than tawny bronze.
Gentle spring was no longer allowed to continue unbroken;
the king of the gods divided the year into four new seasons:
. . . [3]

When I first read the Eclogue I didn’t pay much attention to the reference to Saturn. But when I really started thinking about how the whole poem might relate not only to the Incarnation generally, but to the Nativity in particular, a question reared its head.

In an earlier post, I discussed the thesis of Michael Ward that each of C.S. Lewis’s Chronicles of Narnia are meant to correspond to one of the seven planets in classical Western astronomy. Referring to an article Ward published in Touchstone, I pointed out that The Lion, the Witch, & the Wardrobe, in the plot of which the coming of Christmas has an important rôle, could be seen to correspond to the sphere of Jupiter, as expressed by Lewis’s alliterative poem, ‘The Planets’:

. . . Of wrath ended
And woes mended, of winter passed
And guilt forgiven, and good fortune
Jove is master; and of jocund revel,
Laughter of ladies. The lion-hearted,
The myriad-minded, men like the gods,
Helps and heroes, helms of nations
Just and gentle, are Jove’s children,
Work his wonders. . . . [4]

A little search also yielded another passage Ward quotes, from Lewis’s Allegory of Love: ‘The poetry which represents . . . winter overgone, [is] the poetry born under Jove . . .’ [5] Again, the passing of winter means the coming of Jove.

Even ‘Father Christmas’ appears in Narnia, where it has been ‘always winter and never Christmas’, [6] giving gifts to the Pevensie children. As winter in Narnia is beginning to pass, Lewis describes him in very ‘Jovial’ terms:

He was a huge man in a bright red robe (bright as holly-berries) with a hood that had fur inside it and a great white beard that fell like a foamy waterfall over his chest. . . . Some of the pictures of Father Christmas in our world make him look only funny and jolly. But now that the children actually stood looking at him they didn’t find it quite like that. He was so big, and so glad, and so real, that they all became quite still. They felt very glad, but also solemn.

‘I’ve come at last,’ said he. ‘She has kept me out for a long time, but I have got in at last. Aslan is on the move. The Witch’s magic is weakening.’

And Lucy felt running through her that deep shiver of gladness which you only get if you are being solemn and still. [7]

Finally, I recalled Lewis’s words in his wonderful poem on the Nativity, ‘The Turn of the Tide’:

So I’m not sure if it will be clear to all, but I had formed an idea in my head from of all of this of the coming of Christ meaning the passing of Saturn before Jupiter and the beginning of the end of winter. Yet, here in this Eclogue that I am reading through a Messianic lens, it says that the coming of Christ means the return of Saturn! How can these things be reconciled? I wasn’t looking for perfect logical consistency from a myth, but it seems that they usually have their own logic, and Lewis, who of course knew Virgil and Ovid well, surely knew what he was doing!

Although he was not coming at it from the same point of departure as I, I found that revisiting a fascinating article by Charles A. Huttar answered the question rather well. In ‘C.S. Lewis, T.S. Eliot, & the Milton Legacy: The Nativity Ode Revisited’, Huttar is studying the controversy between Lewis and Eliot over the continued influence of Milton on English poetry and whether it was positive or negative. Huttar argues that Lewis’s ‘Turn of the Tide’ was written as a sort of update to Milton’s ‘Ode on the Morning of Christ’s Nativity’ in order to demonstrate how his legacy can be put to positive use. I shall quote this article at length:

‘Saturn laughed and lost his latter age’s frost’ (line 69); that is, he cease to be saturnine (melancholic). What does Lewis have in mind? . . . The bitter cold (‘frost’) and the melancholy derive from the planet’s distance from the sun and its astrological significance, and Lewis exploits these features elsewhere in his poetry and his fiction. But the cold belongs to the myth also, not as an inherent property of Saturn but as a condition to which he is subjected: Ovid, for example, tells how winter first appeared when Jupiter overthrew Saturn and banished him (Met. 1.116-20). In the present lines, Lewis has the myth in mind as well as the astronomy, and as so often in Lewis’s handling of myths, he gives it a new, creative twist. Saturn has been melancholy, we may suppose (and the cause of melancholy in others), ever since Jupiter dispossessed him and put an end to the Age of Gold over which he ruled; but now, with the prospect of that Age’s returning, his melancholy gives way to mirth. . . . [Thus, Lewis] ties the return of the Golden Age back to the winter setting of his opening lines—and of the ancient Roman Saturnalia, whose carnival atmosphere in December Lewis reflects not only in Saturn’s laughter but in the word ‘revel’ (line 67). No longer burdened with the endless postponement of his rôle as returning king, Saturn greets the true king who will have that rôle. [9]

Huttar also adds a footnote to the statement about Saturn’s melancholy giving ‘way to mirth’:

A connection may also be drawn between the melting of the ice in Saturn’s beard—the ‘Niagara’ image wonderfully illustrates the vast scale of Lewis’s imaginations of the heavens—and the thaw that brings spring to Narnia when Aslan comes (heralded by Father Christmas, whose ‘great white beard . . . fell like a foamy waterfall over his chest’) in The Lion, the Witch and the Wardrobe . . . . The imaginative identification of Saturn with the paradisal had long occupied Lewis’s thoughts. [10]

So, for Lewis it is not Saturn’s rule passing that is equated with the passing of winter (and thus he does not disagree with Virgil), but the melancholy frost passing from Saturn, who thereby becomes more ‘jovial’. Of course, even devoid of his frost, Saturn’s rule, like that of Caesar Augustus, is not the purpose of Christ’s coming, but its prefigurement. As Huttar states, ‘Saturn greets the true king’ whose coming unfroze his beard. [11]

The Saturnine theme links back to my post on the shepherds as well. Recall Albert Hamilton’s statement that the ‘shepherd was taken as the type of the contemplative life as opposed to the active plowman’. [12] Well, Saturn is of course traditionally associated with contemplation, which Cornelius Agrippa considered a species of melancholy (on Saturn & contemplation, see this post). [13] Note too that in l. 23 of the Metamorphoses Ovid says the ‘active plowman’ began his work ‘for the first time’ after the overthrow of Saturn. [14]

I conclude with the words of Lactantius, who, having acknowledged in Divine Institutes V.5 the truth from a Christian perspective in Ovid’s account of the Golden Age, writes in V.7:

But God, as a most indulgent parent, when the last time approached, sent a messenger to bring back that old age, and justice which had been put to flight, that the human race might not be agitated by very great and perpetual errors. Therefore the appearance of that golden time returned, and justice was restored to the earth, but was assigned to a few; and this justice is nothing else than the pious and religious worship of the one God. [15]