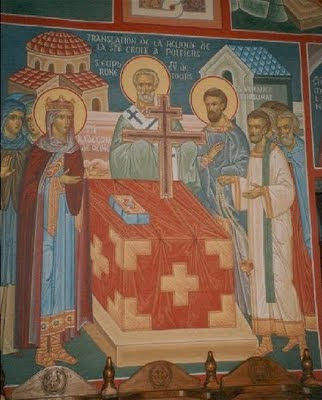 It’s been a while since I posted the first installment in this series, so even faithful readers (if I have any!) may have forgotten about this. But this is the second example from the excised three-part illustration of my thesis about the ‘liturgical consummation of literary genre’ from a forth-coming paper entitled ‘Likeness & Approach: M.M. Bakhtin, C.S. Lewis, & the Liturgical Consummation of Literary Genre.’ For a little more background and context, see the first post, on St Ephrem the Syrian.

In Inferno XXXIV.1, [1] Dante pays a back-handed compliment to the hymn Vexilla Regis of St Venantius Fortunatus (c. 530-c. 600)—still sung during Holy Week in some churches—by using its first line to refer ironically to the figure of Satan. Samuel Duffield calls it ‘surely one of the most stirring strains in our hymnology’, [2] and Christopher Dawson has written of St Venantius that ‘the moment he is touched by the liturgical spirit his tired rhetoric is miraculously transformed into the mighty music of the Vexilla Regis’. [3] The Merovingian poet uses the four-lined stanzaic form in iambic dimeter characteristic of St Ambrose of Milan. [4] Though the meter is nominally classical, the form itself signifies the initial cracks separating Christian poetics from the rigid forms of the ancient genres. Charles Williams quotes the judgment of one historian of Late Antiquity on the old meters in Latin:

The aristocracy of Greek metres, with their delicate music of quantitative syllables, had maintained a precarious hold over Latin verse, the natural roots of which were fixed deep in the stressed peasant rhythms of threshing-floor, spinning-wheel, and country dance, the gnomic saws of the rustic oracle, and the heavy tramp of the marching legionary. [5]

In other words, St Ambrose’s simple, stress-based use of the dimeter, [6] employed here in St Venantius’s triumphant hymn, is a deliberate eschewing of the ancient generic verse-forms; it is an art ‘subordinated…to the new requirements of the liturgy and [written] for the Church and the people’. [7] Such poetry is already, in its form, in its use of the Latin language, taking into account the voices outside that of the poet—it is again a ‘chorus’ like the poetry of St Ephrem—and the ‘low’ forms that properly reflect their discourse. It leaves behind monoglossia and the ‘literature of ruling social groups’. [8] Helen Waddell writes, ‘It is the little byways [of poetry] that Fortunatus made accessible to men for whom the Roman road of the epic was too stately’. [9] His poetry inaugurates a ‘new authenticity’ and makes available new subjects, unknown to the ancient genres. [10]

These observations should be borne out in an analysis of the first and fourth stanzas of the hymn in question:

The standards of the King go forth,
Shines out the blazoned mystery,
The Cross whereon the Lord of men
As man was hung.

O Tree of beauty and of light,
With royal purple dyed,
Well wert thou chosen then to bear
That sacred load. [11]

‘The standards of the King’ bring the worshipper into the realm of nearness by likeness, of which royalty is perhaps the most obvious example, but it must not be forgotten that a royal procession is after all a popular spectacle. More importantly, the equation of the vexilla with the Cross [12] (made in the Latin in the second line rather than the third) signifies the ultimate way of approach. In the height of irony, ‘the Lord of men / As man was hung’ (literally, ‘the author of flesh as flesh’). The Christian God accepted the most ignoble death that the Greco-Roman world had to offer, and it is by imitating Him and following the way of the Cross that the Christian attains to His own royal dignity. Furthermore, in the paradox of the Arbor decora et fulgida (4.1), the Cross itself, while an object ‘of beauty and of light’, is still a humble piece of rough-hewn wood. In Waddell’s words, ‘[The Cross of Vexilla Regis] is not as the Latins took it, the symbol and the sign: to Fortunatus, it is still the tree as it grew in the forest, foredoomed to its great and terrible destiny’. [13] On Waddell’s reading of the Cross as Tree, St Venantius’s poetic voice teems with the chorus of the Germanic peoples of Northern Europe, represented by Radegunde, who ‘was his finest inspiration’. [14] In this choral perspective, even the lowly trees of the earth are lifted up in being chosen to bear the Lord and to ‘shine out’ His mystery by becoming a royal standard. Just like the tree that fashioned the Cross, the human being who must bear his or her own cross is not near to God by likeness, but is able to become near to Him by precisely this approach.

[6] Giulio Cattin points out that in St Ambrose himself, the change is still not complete:

With Ambrose, hymnody took on a new and definitive shape; the short line of four iambs (each consisting of a short and a long syllable) is linked to ‘quantitative’ metrics, but already attention is being paid to the position of accent in the line, and a process of evolution is under way tending first to make long and accented syllables coincide, and ultimately to yield the complete predominance of the tonic accent as the constructive principle of versification.

[12] Duffield, in his rendering of the second line as ‘The cross upon them [the banners] cheers the sky’ (93), seems to miss the point of these lines. St Venantius is not referring to a symbolic cross emblazoned on the royal banners, but to the True Cross itself, being carried in solemn procession to the church at Poitiers. Thus, the ‘royal banners’ is an ironic, or alternately, a theological reference to the relic.