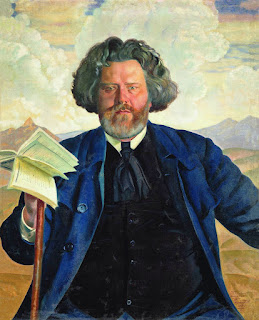 I am no longer quite the Russophile that I once was, but I still think a bit about Mother Russia every once in a while. I believe it was while I was turning over in my mind the words ‘all Rus’ from the commemoration of Patriarch Kiril in the liturgy this morning that I thought of one of my favourite poems from my Russophile days. In his wonderful anthology, The Heritage of Russian Verse, Sir Dimitri Obolensky included two pieces by a minor poet named Maximilian Voloshin (1877-1932). The second is entitled ‘Святая Русь’, or ‘Holy Russia’. Here is Obolensky’s ‘plain prose translation’ arranged into lines roughly reflecting the Russian verses, with a few interesting words from the Russian in brackets:

Was it not for you that Suzdal' and Moscow
gathered the land apanage by apanage,
collected gold in a tightly packed bag,
stored up a dowry in their coffers,
and reared you as a bride
in a narrow [расписном], frescoed tower-room [терему]?

Was it not for you that the Carpenter-Tsar [Плотник-Царь]
built by the sources of rivers a spacious house,
with windows looking out on to the five seas of the earth?
With your beauty and warlike strength
were you not the most desirable of brides
for the sons of foreign princes?

But from childhood you had a liking
for wooden hermitages [скитов] deep in the forests,
for trackless lands of nomads in the steppes,
for free open spaces, for ascetics’ chains,
for pretenders, felons, and unfrocked monks,
for the whistling of Nightingale the Robber [Соловьиный посвист], and for prisons. [1]

You did not want to belong to the Tsar,
and this is the way things turned out:
the enemy whispered: ‘Scatter and squander,
give away your treasure to the rich,
your power to slaves, your strength to your enemies,
to villeins your honour, to traitors your keys.’

You lent your ear to the evil counsel,
you gave yourself to the robber and to the felon,
you set fire to your suburbs and crops,
you laid waste your ancient dwelling-place,
and you went out humiliated and a beggar,
and the slave of the meanest slave.

Shall I dare cast a stone at you?
Shall I condemn your wild and passionate flame?
Shall I not bow down [поклонюсь] before you with my face in the mud,
blessing the trace of your bare foot,
you homeless, wanton, drunken
Russia—fool in Christ [во Христе юродивая Русь]! [2]

I never bothered to learn anything about Voloshin beyond Obolensky’s brief note that he was ‘a Symbolist...chiefly remarkable for his poems inspired by the Revolution which he hated and feared, but accepted as part of Russia’s spiritual destiny.’ [3] However, for the sake of this post I decided to consult Evelyn Bristol’s chapter on the years 1895-1925 for The Cambridge History of Russian Literature. Here is what I found:

The minor poet Maximilian Voloshin (real name: Kirienko-Voloshin, 1877-1932) grew up in the Crimea and was later expelled from Moscow University for political activity. After spending several months in Siberia he went to Paris to continue his education, and there fell under the influence of José-Maria de Heredia for his own work. After travelling extensively in Mediterranean countries, he published a collection of poetry in Russia in 1910. Though his poems are often responses to such particular geographical locations as Paris, the Mediterranean, or the Crimea, they are characteristically intimate reflections on broad cultural themes, incorporating frequent allusions to myths, history, and biblical events. he could create memorable scens of the bleak coastal heights of the Crimea, and he knew the value of small but telling details. His overall philosophy was pessimistic from the start, however.

After experiencing the First World War, the revolution of 1917 and the ensuing civil war, Voloshin wrote anti-militaristic works of which the most popular was Deaf-Mute Demons (Demony glukhonemye, 1919), which dealt with the violence and atrocities then afflicting contemporary Russia. He moved permanently to the Crimea, to Koktebel, where his house became a refuge for friends of all political and literary stripes and his poetry was infused with Christian mysticism and a new sense of mission. After 1923, however, he could no longer publish. [4]

[1] Obolensky has a footnote on ‘Nightingale the Robber’ which reads, ‘A fantastic creature of Russian heroic poetry, half bird, half man.’

A very clever connection he makes - the synthesis between the practice of considering homeless and possibly crazy people as holy (as it is possible they actually are) and the attitude and character of Russia, personified. With, of course, both its positive and negative potentialities.

I of course approve of almost any symbolist as long as they haven't become an idol worshiper or a political operative...

I would wonder if there is a collection of his poems somewhere translated like this, into the vernacular?