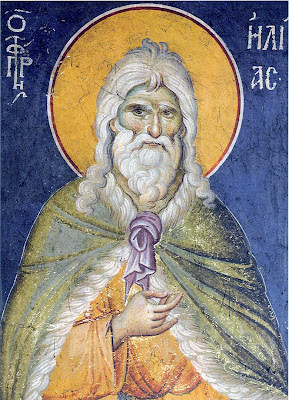 Today, 20 July on the Church’s calendar, we celebrate the memory of the Prophet Elijah the Tishbite (believed to have lived in the 9th century BC). I did a full post on St Elijah way back in 2009 when I was still a relatively new blogger. This will not be a full post in the old Logismoi style, but merely a couple of things I thought of posting related to the Prophet.

First of all, it has long been noted that St Elijah has been taken as a type of the Christian monk. William Harmless has, for instance, pointed out the Elijah typology in St Athanasius’s famous Vita Antonii (which David Hicks at the CiRCE conference called his favourite book by St Athanasius):

The most significant biblical type for Antony is Elijah. Athanasius says that Antony ‘used to tell himself that from the career of the prophet Elijah, as from a mirror, the ascetic must always acquire knowledge of his own life’ (VA 7). [1] Like Elijah, Antony is called a ‘man of God’ (VA 70; cf. 1 Kgs 17:18; 2 Kgs 1:9-13). Like Elijah, he dwells in the desert and is described as ‘seated in his mountain’ (VA 59, 60, 66, 84, 93; cf. 2 Kgs 1:9). Like Elijah, he win [sic] duels against those who worship false gods and foretells the death of a military commander who comes out to the desert to seize him (VA 86; cf. 1 Kgs 18, 2 Kgs 1). In 2 Kings, Elijah hands down his cloak to his disciple Elisha; in the Life, Antony has two Elishas, so to speak, handing down one sheepskin and his cloak to Athanasius and the other sheepskin to Serapion (VA 91; cf. 2 Kgs 2:13 ff.). In the preface, Athanasius says that he learned all that he could of Antony from a longtime disciple who had ‘poured water over his hands’, an allusion to 2 Kgs 3:11, in which Elisha is described as pouring water into the hands of Elijah. This Elisha-like informant was, presumably, Serapion (VA praef.). [2]

Somewhat along the lines of the comment Harmless cites from VA 7, St Macarius the Great seems to find a deeper significance to the connection between the Prophet Elijah and the monastic life than the external desert life per se. In Homily 6.2, St Macarius writes:

It is not becoming a servant of God to live in a state of disturbance, but rather in all tranquility and wisdom as the Prophet said, ‘Unto whom shall I look but unto him that is meek and quiet and that trembles at my words?’ (Is 66:2). And in the times of Moses and Elijah we find that in the visions granted them, even though there was a great display of trumpets and powers before the majesty of the Lord, still, amidst all of these things, the coming of the Lord was discerned and he appeared in peace and tranquillity and quietness. For it says: ‘Lo, a still, silent voice and the Lord was in it’ (1 Kgs 19:12). This proves that the Lord’s rest is in peace and tranquillity. For whatever foundation a person lays and whatever beginning he makes, he will continue in that until the end. [3]

So the experience of the Prophet Elijah on Mt Horeb is taken as a model of the contemplative (theoretic) life—indeed, of hesychia itself.

It is interesting to note that in the West, the model of the Prophet Elijah eventually became connected especially with an order that—while it later became part of the movement of mendicant friars, along with Franciscans and Dominicans—was originally a collection of hermits living in the Holy Land on Mt Carmel itself during the Crusades. As Thomas Merton observes:

The Carmelites were originally hermits. And of course their life was the traditional hermit life known to the East from the earliest centuries of the Church. They lived as the desert fathers had lived eight hundred years earlier....They were in fact simple laymen, living as solitaries in a loosely connected group, in caves and huts on the side of Mt Carmel. Their manner of life was not yet institutionalized, and even when [c. 1209-1214] they first asked for a Rule, from the hands of the [Latin] Patriarch of Jerusalem [Albert of Jerusalem], that Rule was, as we shall see, deliberately kept simple and uncomplicated....In the words of the Rule itself, [the purpose of the Carmelite life] was: ‘Let each one remain in his cell or near it, meditating day and night on the Law of the Lord, and vigilant in prayer, unless he is legitimately occupied in something else.’ [4]

And on the connection with the Prophet Elijah, ‘the symbolic adoption by the Carmelites of the prophet Elias as their “Founder”’:

It is quite true that the hermits living on the slopes of Mt Carmel, near the ‘spring of Elias’, where the prophet himself had prayed and dwelt alone, and where the ‘sons of the prophets’ had had a ‘school’, [5] could themselves claim to be descendants of the ancient prophets. It is quiet true that Elias, in a broad sense, was the ‘founder’ of this way of life since he had in fact been the inspiration of those countless generations that had lived there in the places hallowed by his memory and stamped with his indelible character. [6]

Finally, Merton notes that the Carmelites too found a deep typology in the Prophet of what appears to an Orthodox reader as an almost hesychastic contemplative experience of their own:


The author of that moving ancient text on the spirit of Carmelite prayer and contemplation, the Institution of the first Fathers, interprets the retirement of Elias in typical medieval style. To hide in the torrent of Carith (2 Kgs 17:3) is to embrace the ascetical life, which leads to the perfection of charity by one’s own efforts, aided by the grace of God. To drink of the torrent is to passively receive the secret light of contemplation from God and to be inwardly transformed by His wisdom: ‘...to taste, in a certain manner, in our heart, and to experience in our spirit the power of the divine presence and the sweetness of the glory from on high, not only after death but even in this mortal life. That is what is really meant by drinking from the torrent of the joy of God...’ [7]

One wonders if these Latin pilgrims had perhaps learned something from Orthodox monks that may have been living in the area.

Finally, to bring the consideration of St Elijah down to the level of the ordinary life of traditional Christian laymen, in her fascinating book, Cosmos, Life & Liturgy in a Greek Orthodox Village, Juliet du Boulay writes:

...there is a hint, in a poem to the Prophet Elias (Elijah) quoted later, that mountain tops are regarded as openings to the heavenly world. This prophet customarily has his churches on the tops of hills and mountains, so the invocation of Elias is the invocation of one who, as the inhabitant of the mountain peaks, lives at the point where earth meets heaven. [8]

Eventually, du Boulay makes good on her promise to quote the poem, sung by young girls who perform a traditional folk ritual in traditional Greek villages on 1 May:


Quickly, quickly,
Quickly to Saint Elias;
And Saint Elias to the sky
So that God will send rain
For the wheat, for the barley,
For all the grains of God.
Holes, holes for the wine,
Channels, channels for the water.
The farmer with his mattock
To stop the water running out. [9]

The song takes the form of a call to the village to appeal to the Prophet Elias, previously noted as having his churches on mountain tops in reflection of his vision of God on Mt Horeb, so that he will intercede ‘for all the grains of God’, and its structure is parallel with a similar prayer made every week in the Divine Liturgy during the Litany of Peace: ‘For temperate weather, for abundance of the fruits of the earth, and for peaceful seasons, let us pray to the Lord.’ The structure in both is of an intercession made directly to a holy figure, and what is prayed for, translated as temperate weather (εὐκρασία ἀέρων), means precisely a good mixture or a good balance of the atmosphere, whose consequence is fruitfulness. Thus the symbolic language, which could be ambiguous on its own, is in the song and the mime that accompanies it made into a pattern of words and actions which is continuous with the pattern of prayer offered in church. [10]


Although I’ve never witnessed this little ritual, I did have the good fortune once to attend a Divine Liturgy on the Feast of the Prophet Elijah at one of these little hilltop churches du Boulay mentions. My chief memories are of a woolly Pontian priest whose Greek dialect I couldn’t understand at all, and of the lingering breakfast in the cool shade just outside of the church.

[1] This remarkable comment is found on p. 37 of Robert Gregg’s translation—St Athanasius the Great, The Life of Antony & The Letter to Marcellinus, tr. Robert C. Gregg (Mahwah, NJ: Paulist, 1980), p. 37.

[2] William Harmless, Desert Christians: An Introduction to the Literature of Early Monasticism (Oxford: Oxford U, 2004), p. 70. I've added the citations from VA and from Scripture to the text, whereas Harmless had them in endnotes.

Thank you for this thoughtful post and in particular for writing about the similarities between St. Elijah and St. Antony in the Vita Antonii. Curiously, St. Athanasius refers to Bishop Lucifer of Cagliari as the "Elijah of our times" in his second letter to the Sardinian bishop, who went on to have a checkered career. http://www.newadvent.org/fathers/2806051.htm

Of possible interest may be Pope Benedict's reflections on St. Elijah in his general audience of June 15, 2011. http://www.vatican.va/holy_father/benedict_xvi/audiences/2011/index_en.htm

(I'm likely guilty of needless pedantry in noting that in the English translation of the Italian papal address, the translator mistakenly added the gloss Ecclesiastes, rather than Ecclesiasticus, next to Sirach. The mistaken gloss is not in the Italian original.)

Jeff> Well, clearly the comparison with St Antony was much more apropos!

Concerning the translator's mistake you mention, you are certainly not guilty of needless pedantry. That is an unforgivable error!