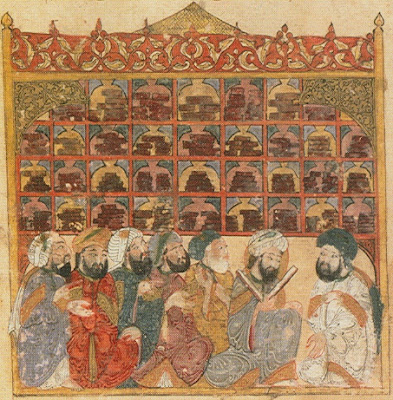 I had toyed some time ago with the idea of doing some shorter posts featuring quotations from my reading, with less commentary and original input than has always been typical at Logismoi. It would be something, in fact, rather like the 'Marginalia' I have long admired over at The New Psalmanazar. I have been less than satisfied with simply posting quotations on Facebook, and partly to make some fun use of my new computer, I have decided that now is the time to begin. I hope I won't be reproached for being entirely unoriginal and also referring to these posts as 'Marginalia'. I mean, the Bible says there's 'nothing new under the sun' anyway.
So, to kick things off:

Ibn al-Alkami  The last vizier of Baghdad, who owned one of the largest libraries of that city. The library, which contained 10,000 books, was destroyed during the sack of Baghdad by the Mongols in 1258, when every one of Baghdad's thirty-six libraries also perished. [1]

This is one of the entries in 'An Annotated Guide to the Historical and Literary References in The Name of the Rose' (which novel I am rereading so as to discuss it with students this Autumn), located in The Key to 'The Name of the Rose', Including Translations of All Non-English Passages by Adele J. Haft, Jane G. White, and Robert J. White. [2]
I am somewhat embarrassed to admit it, as I always have been about those things that most fire my imagination, but I've recently been quite taken by the 'Orientalist' bug. I won't go into the details (although I think it coincided with reading some of the stories of Borges), but it has given me a new interest in Arab references everywhere, including those in Eco's novel.
But obviously it didn't take Orientalism to get me to sit up and take notice of this. The destruction of thirty-six mediaeval libraries, including at least one holding 10,000 books, was enough to do it. It reminds me of an anecdote I read last year in Jaroslav Pelikan's The Idea of the University: A Reexamination:

When the armies of the German Empire invaded Belgium in August 1914, one of their first victims was the University of Louvain, established by a papal charter of 9 December 1425. The burning of the university library cost the world of scholarship three hundred thousand books and more than a thousand original manuscripts (including the university's charter from 1425), and it has ever since symbolized the triumph of the irrational over the rational. As one historian has told the story, 'In Brussels the Rector of the University, Monseigneur de Becker, whose rescue was arranged by the Americans, described the burning of the Library. Nothing was left of it; all was in ashes. When he came to the word "library"--bibliothèque--he could not say it. He stopped, tried again, uttered the first syllable, "La bib--" and unable to go on, bowed his head on the table and wept.' [15-6]