My Journey to Borges 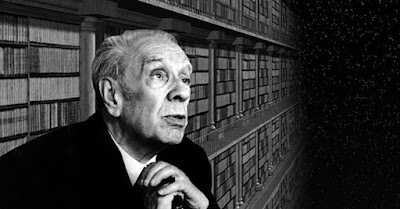 I think I can confidently say that I first encountered Borges through William Poundstone’s delightful book, Labyrinths of Reason: Paradox, Puzzles & the Frailty of Knowledge. Knowing of my youthful interest in math and the logic puzzles of Lewis Caroll, my dad introduced me to Labyrinths of Reason when I was probably 12 or 13. Although for some reason I never followed it up until years later, I never forgot Poundstone’s description of Borges’s ‘Tlön, Uqbar, Orbis Tertius’:

The best paradoxes raise questions about what kinds of contradictions can occur--what species of impossibilities are possible. Argentine writer Jorge Luis Borges (1899-1986), whose work appeals to all lovers of paradox, explored many such questions in his short stories. In ‘Tlön, Uqbar, Orbis Tertius’, he describes an encyclopedia, supposedly from another world, created as an elaborate hoax by a group of scholars. Borges’s scholars can even imagine the paradoxes of their fictitious world; so alien is the thinking of ‘Tlön’ that their paradoxes are commonplaces to us. [1]

Poundstone goes on to quote the Tlönian paradox of the ‘nine copper coins’. I will not reproduce it here, but of course the whole story is worth reading. Poundstone comes back to it in Chapter 10, ‘Meaning: Twin Earth’, where he discusses the mysterious Voynich Manuscript. There he observes:

The Voynich manuscript is reminiscent of (and conceivably inspired) Borges’s short story ‘Tlön, Uqbar, Orbis Tertius’. In the story an eccentric millionaire financed a conspiracy of scholars to write an encyclopedia of the imaginary world ‘Tlön’. The first drafts were in English, but the plan was to translate the encyclopedia into Tlön’s (equally imaginary) language and calligraphy, creating a wholly inscrutable work. [2]

There are other references to Borges in Poundstone--the essay ‘The Analytical Language of John Wilkins’ on pp. 44-5; another essay, ‘Avatars of the Tortoise’, on p. 135; the story ‘The Garden of Forking Paths’ on pp. 160-1; and, with Adolfo Bioy Casares, Extraordinary Tales on pp. 258-9. But I am less certain I actually read these parts as a youth.

My next encounter with Borges was my freshman year of college. I had my first bookstore job at a tiny little used shop run by a late friend of mine, Bob Cowden, and while I can’t pin it down, at some point during my stint at that shop I read and fell in love with Umberto Eco’s magnificent The Name of the Rose. Of course, nothing about the reference to Borges in Poundstone, even as well as I remembered it, came to me when reading of the blind librarian, Jorge da Burgos, zealous to prevent anyone from reading Aristotle’s lost work on comedy. But when I reached Eco’s ‘Postscript’, printed at the back of the trade paperback translation I read, I found this (spoiler alert):

The constructed world will then tell us how the story must proceed. Everyone asks me why my Jorge, with his name, suggests Borges, and why Borges is so wicked. But I cannot say. I wanted a blind man who guarded a library (it seemed a good narrative idea to me), and library plus blind man can only equal Borges, also because debts must be paid. And, further, it was through Spanish commentaries and illumination that the Apocalypse influenced the entire Middle Ages. But when I put Jorge in the library I did not yet know he was the murderer. He acted on his own, so to speak. [3]

I suppose it is possible that it had only been five years since I’d first learned of this Borges from Poundstone, but when I found him in Eco I definitely knew him already as the Argentine author of ‘Tlön’, about an encyclopedia.

Maybe this was why I found him memorable. I had been a lover of encyclopedias since I could first read. Maybe even longer. I had grown up with 1940s or 50s editions of the World Book Encyclopedias--which I used to pore over exhaustively, following the suggestions for additional articles on a given topic--at the homes of both sets of grandparents. My own parents had a Funk & Wagnalls, which, incidentally, was the first source I consulted to learn about the Orthodox Church (that edition had a fine article by the late Fr John Meyendorff). One of my most treasured possessions now is an eleventh edition Encyclopaedia Britannica--an encyclopedia that Jaroslav Pelikan once called ‘easy...to romanticize’. [4] I can’t help but think that this connection of Borges, not just with libraries, but with an ‘imaginary encyclopedia’, is part of what caused him to stick in my mind.

I nearly forget to mention that within 6 or 7 years of reading Eco, in Thessaloniki, I became very dear friends with a Greek-Italian-American graduate of St John’s College Santa Fe named Philip Navarro (you’ll find him credited in one way or another in a number of English-language Orthodox publications). Sadly, I have found that dear Philip is a difficult person to stay in touch with, but the years that we spent either in the same city or at least talking frequently on the phone were sufficient for the fellow to acquire his own real estate in my mind. Anyway, this is relevant because Philip was a huge fan of Borges, and made reference to him every once in a while. I sheepishly admitted that I had not actually read him, but I knew that the day must come eventually.

Nevertheless, it could only have been within about the last 10 years that I finally got round to purchasing something of Borges’s--a Book-of-the-Month Club edition of Labyrinths: Selected Stories & Other Writings. And it was probably a few more years after the purchase that I finally read my first actual Borges story, ‘Deutsches Requiem’ (a powerful piece vividly depicting the psychology of an educated Nazi prison camp guard--read it while listening to Brahms’s Ein Deutsches Requiem and try not to weep). It was a few years more before I read any further into Labyrinths.

In the end it was the brief little pieces, not quite fiction, not quite essays, that Borges calls ‘parables’ that really drew me in. As an example, I shall post perhaps the briefest one in Labyrinths, ‘Parable of Cervantes & the Quixote’:

Tired of his Spanish land, an old soldier of the king sought solace in the vast geographies of Ariosto, in that valley of the moon where the time wasted by dreams is contained and in the golden idol of Mohammed stolen by Montalbán.
In gentle mockery of himself, he imagined a credulous man who, perturbed by his reading of marvels, decided to seek prowess and enchantment in prosaic places called El Toboso or Montiel.
Vanquished by reality, by Spain, Don Quixote died in his native village in the year 1614. He was survived but a short time by Miguel de Cervantes.
For both of them, for the dreamer and the dreamed one, the whole scheme of the work consisted in the opposition of two worlds: the unreal world of the books of chivalry, the ordinary everyday world of the seventeenth century.
They did not suspect that the years would finally smooth away that discord, they did not suspect that La Mancha and Montiel and the knight’s lean figure would be, for posterity, no less poetic than the episodes of Sinbad or the vast geographies of Ariosto.
For in the beginning of literature is the myth, and in the end as well. [5]

Obviously, this is quite simple. It is the briefest observation about Cervantes. It might perhaps even have been stated by someone else in a much less interesting way--in Cervantes’s day, his own time and place were not terribly romantic, whereas 400 years later they are practically the stuff of legend. But in Borges’s hands, it becomes something that awakens the imagination, enchanting the world itself and the books that tell us of it.

Just a few weeks ago I finally purchased Borges’s Collected Fictions--as I understand it, his complete fiction--and I’ve begun working on it. I did finally read ‘Tlön’ as well as another one, which I think Philip must have told me about, called ‘Pierre Menard, Author of the Quixote’. I’ve read nearly all of the short pieces originally published in the 1960 volume, The Maker. I just completed Borges’s homage to H.P. Lovecraft, ‘There Are More Things’. I’ve read a wonderful essay of Borges on Dante, ‘The Divine Comedy’, [6] as well as two lectures by Eco on Borges: ‘Between La Mancha & Babel’ and ‘Borges & My Anxiety of Influence’, both in On Literature. [7]

I realise all of this is kind of superficial, and not likely to be of much interest to anyone who doesn’t know me. I plan to do a second Borges post wherein I will explore a couple of short pieces in a little more depth.