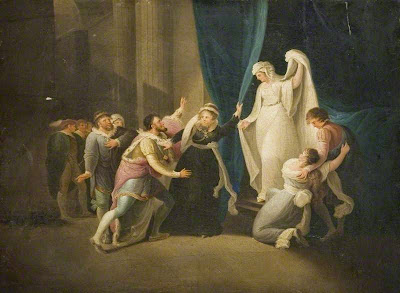 This will likely be a short post, largely because I don’t have that much to say on the subject right now, but I’d still like to get it out there for my own benefit at least.

Recently, Xenia Sheehan very kindly had Paraclete Press send me a review copy of The Grace of Incorruption: The Selected Essays of Donald Sheehan on Orthodox Faith & Poetics, a collection of essays by her late husband, Donald, a former professor of English at Dartmouth and director of The Frost Place in New Hampshire. I was thrilled to receive it, having already perused the contents in a pdf she e-mailed me a few months back, but felt a little uncertain of what order I wanted to read it in. To make a long story short, I found myself very soon going to Part One, chapter 6, ‘The Way of Beauty & Stillness: Shakespeare’s Winter’s Tale’. [1] It is a truly enlightening essay throughout, and I was excited by Sheehan’s handling, signalled in the title itself, of Archimandrite Vasileios’s lovely bibliaki, Beauty & Hesychia in Athonite Life, as well as the reading of the Bard’s play that is the essay’s raison d’être.

What I wanted to focus on here, however, is a very specific aspect of Sheehan’s perceptive mediation of a dialogue between Winter’s Tale and J.D. Salinger’s Franny & Zooey. He describes the plot of WT in some detail, focusing intently on Paulina’s revelation of the living Hermione to her husband, Leontes, who has believed her dead for 16 years. Sheehan notes that this revelation is a response to, but also, by cultivating a spirit of stillness through beauty, further productive of Leontes’s repentance for his destructive jealousy. He then suggests that the image of ‘the Fat Lady’ that their older brother Seymour has inculcated in Franny and Zooey has taught Franny a similar wisdom born of beauty and stillness:

This wisdom is above all iconic, for it reveals to the beholder--both to Franny and to Leontes--the way of beauty and stillness.

In both Salinger and Shakespeare, this way opens through death: the [feigned] death of Hermione and the [actual] death of Seymour. For in both, death becomes the way in which both Hermione and Seymour can become iconic, and in so doing, they can become for Leontes and Franny the transforming experience of the boundary, that place between the worlds that simultaneously separates and reconciles. As Father Vasileios puts it: ‘To die, to be buried, to depart’ so as ‘to give another the ability to love life’ (Beauty, 9). Here is the light of beauty and stillness that shines in late Shakespeare and Salinger. [2]

This passage immediately recalled for me a book I spent a bit of time with in college--Edith Wyschogrod’s Saints & Postmodernism: Revisioning Moral Philosophy (which I have already blogged about briefly here). In chapter two, ‘Saintly Influence’, ‘Henry James’s novel The Wings of the Dove is treated as hagiographic fiction that illustrates the influence of altruistic action on moral self-interpretation and practice.’ [3] The ‘saint’ of the piece, on Wyschogrod’s reading, [4]  is Millie Theale, a young American heiress suffering from a terminal illness who discovers that the poor Englishman (Merton Densher) she loves is secretly engaged to someone else (Kate Croy) and is only pursuing her in the hopes of getting her money after she dies. Although this plan is conceived by Kate, Densher is induced to persist in the courtship of Millie until his conscience drives him to confess. Already Millie’s kindness and innocence have been operating upon him, and she selflessly encourages him to pursue his true love, Kate. But when she dies, Millie leaves the scheming couple a large bequest to help them get married, despite knowing full well how they had tried to deceive her. While remaining firm in her intent to accept the money, Kate astutely observes, ‘She gave up her life that you might understand her’, and ‘She died for you that you might understand her. From that hour you did.’ [5]

In Wyschogrod’s words, it is here, ‘when the interplay of cynical reason and saintly generosity becomes transparent’, that ‘Densher’s transfiguration occurs’. [6] He renounces the bequest and refuses to marry his calculating fiancee unless she renounces it too. ‘...Millie’s moral practice is now (somehow) repeated in Densher’s life. He has learned a new moral gesture.’ [7] One is tempted to say that whereas for Kate, the ‘wings of the dove’ were Millie’s bequest itself, enabling her and Densher to ‘fly and be at rest’ in their worldly life, for Densher the ‘wings’ were her forgiveness and generosity made manifest in her death by the request, which enable his soul to fly from the mercenary ends he has pursued and ‘be at rest’ inwardly. To use Sheehan’s words, Millie becomes iconic, thereby opening to Densher the way of beauty and stillness. Fr Vasileios’s words, quoted by Sheehan, certainly seem to apply to Millie’s decision:

To die, to be buried, to depart. . . . And yet to have lived and died in such a way that your presence, discretely and from a distance as if a fragrance from someone absent, can give others the possibility to breathe divine fragrance! To grant someone else the possibility of living, of being invigorated, of having the nausea dispelled; to give another the ability to love life, to acquire self-confidence and stand on his own two feet, so that from within him there arises spontaneously a ‘Glory to Thee, O God!’. [8]

Never having read The Wings of the Dove, or Franny & Zooey for that matter, I can’t develop the connections much further without ending up on thin ice, but even this much looks to me like an interesting parallel.

[4] It should be noted that Wyschogrod is well aware that her ‘saint’ is not a traditional one. One reason she notes inter alia: ‘In Jewish and Christian saintly narratives, power ultimately derives from transcendence and is channeled through saintly practice. By contrast, in a novel reflecting its nineteenth-century capitalist provenance, power is derived from wealth’ (ibid., p. 45).