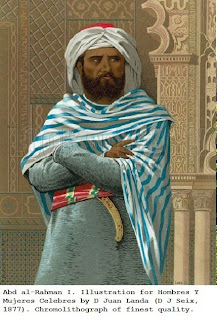 In Jorge Luis Borges's enchanting little story, 'Averroës' Search', about the mediaeval Arab philosopher, I came across the following passage a couple of weeks ago:

'...Time widens the circle of the verses, and I myself know some verses that are, like music, all things to all men. Thus it was that many years ago, in Marrakesh, tortured by memories of Córdoba, I soothed myself by repeating the apostrophe which 'Abd-al-Rahmān spoke in the gardens of al-Rusayfah to an African palm:


On this foreign soil...

'A remarkable gift, the gift bestowed by poetry--words written by a king homesick for the Orient served to comfort me when I was far away in Africa, homesick for Spain.' [1]

Then, last Saturday morning, I awoke with the Doors' song 'Spanish Caravan'--with its lyric, 'Andalusia with fields full of grain'--stuck in my head, and I had to read a bit about Spanish geography. Finally, a grabbed a copy of a book I bought several years ago, Night & Horses & the Desert: An Anthology of Classical Arabic Literature, edited by Robert Irwin, the 6th chapter of which is entitled 'The Lost Kingdoms of the Arabs: Andalusia'. On the second page of that chapter, I read the following, and immediately recalled Borges:

'Abd al-Rahman I (reigned 756-88) made Cordova the capital of the territory of Andalusia. (The Arabic toponym 'Al-Andalus', which probably originally meant 'Of the Vandals', subsequently came to refer to Muslim Spain.)

'Abd al-Rahman I was himself a poet. The poem which follows was written at Rusafa, his Spanish palace, which he had named after one of the Umayyad palaces in Syria where he had grown up.


A palm tree I beheld in Ar-Rusafa

Far in the West, far from the palm-tree land:

I said: You, like myself, are far away, in a strange land;

How long have I been far away from my people!

You grew up in a land where you are a stranger,

And like myself, are living in the farthest corner of the earth:

May the morning clouds refresh you at this distance,

And may abundant rains comfort you forever!


'Abd al-Rahman's poem about exile and longing was to set a precedent for the many backward- and eastward-looking laments which form a leading theme in Andalusian literature. [2]