'A Crown of Many Virtues'—The Feast of Stephen 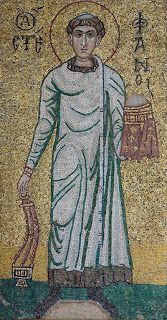 Today, 27 December on the old Orthodox calendar, is the feastday of the Holy Protomartyr Stephen the Archdeacon, whose story is told in Acts 6-7. Here one can read the account of his life in the Prologue, which adds to the account in Acts a number of the Church’s traditions about St Stephen and his martyrdom. I also highly recommend the two homilies on the Holy Protomartyr by St Gregory of Nyssa, available here. Interestingly, the St Pachomios Library notes, ‘Legends recorded in Georgian and Slavonic relate that Stephen converted Pilate and his family to Christianity.’ Unfortunately, no bibliographical info is given for this.

I’ve always been struck by three things in particular about St Stephen. The first is the—to me—amazing fact of Saul’s presence among those who martyred the Saint. Concerning this, St Fulgentius of Ruspe (468-533) has written (in his homily on the Saint’s feastday):

Strengthened by the power of his love, [St Stephen] overcame the raging cruelty of Saul and won his persecutor on earth as his companion in heaven. In his holy and tireless love he longed to gain by prayer those whom he could not convert by admonition.

Now at last, Paul rejoices with Stephen, with Stephen he delights in the glory of Christ, with Stephen he exalts, with Stephen he reigns. Stephen went first, slain by the stones thrown by Paul, but Paul followed after, helped by the prayer of Stephen. This, surely, is the true life, my brothers, a life in which Paul feels no shame because of Stephen’s death, and Stephen delights in Paul’s companionship, for love fills them both with joy. It was Stephen’s love that prevailed over the cruelty of the mob, and it was Paul’s love that covered the multitude of his sins; it was love that won for both of them the kingdom of heaven.

Second, ever since I was a young boy, I’ve been fascinated by the statement in Acts 6:15 that ‘all that sat in the council, looking stedfastly on him, saw his face as it had been the face of an angel’. I may have first taken note of the similarity to Moses when I read St Nikolai’s observation in the Prologue that ‘his face was illumined by the light of grace as was the face of Moses when he talked with God’, but the connection between the Protomartyr and the Prophet seems a clear point to me, especially in light of the false claim that St Stephen had ‘spoken against’ Moses (Acts 6:11). There is also the parallel between Acts 6:8, ‘And Stephen, full of faith and power, did great wonders and miralces among the people’, and St Stephen’s own statement in Acts 7:22 that ‘Moses was learned in all the wisdom of the Egyptians, and was mighty in words and in deeds.’ Of course, St Gregory Palamas, in Triads II.iii.9 (to which I was directed by the endnote on Acts 6:15 in Holy Apostles Convent, trans., The Orthodox New Testament, Vol. 2: Acts, Epistles, and Revelation [Buena Vista, CO: Holy Apostles Convent, 1999], p.81) makes clear the nature of this ‘light of grace’ (from St Gregory Palamas, The Triads, ed. Fr John Meyendorff, trans. Nicholas Gendle [Mahwah, NJ: Paulist, 1983], p. 57):

This light is not the essence of God, for that is inaccessible and incommunicable; it is not an angel, for it bears the marks of the Master. Sometimes it makes a man go out from the body or else, without separating him from the body, it elevates him to an ineffable height. At other times, it transforms the body, and communicates its own splendour to it when, miraculously, the light which deifies the body becomes accessible to the bodily eyes. Thus indeed did the great Arsenius appear when engaged in hesychastic combat; similarly Stephen, whilst being stoned, and Moses, when he descended from the mountain.

Thus it seems indubitable that St Stephen, having had the same experience of God as the Prophet Moses, which experience is demonstrated by his carrying the same outwardly manifested illumination, can be relied upon to interpret correctly the words and deeds of the Prophet. I am reminded of the following other words of St Gregory: ‘Are we, then, to count as nothing these people who have been taught by experience and grace, and to submit ourselves to those who assume the rôle of teachers out of conceit and in a spirit of contention?’ (The Philokalia, Vol. IV, trans. G.E.H. Palmer, et al. [London: Faber, 1998], p. 342).

Finally, I have always been greatly impressed by St Stephen’s forgiveness of his murderers, ‘Lord, lay not this sin to their charge’ (Acts 7:60), as profound an imitation of our Lord’s example and obedience of His commandment as can be found. It forms the primary subject of the Hymn of Praise for St Stephen that St Nikolai (Velimirović) includes in the Prologue:

Bloody Stephen knelt
And in a loud voice cried out to God:
‘O Lord, Who from the Cross forgave
The greatest sin to ever shake the earth,
The greatest sin that heaven ever beheld,
Thou forgavest Thy murderers.
Now, O Most-gracious One, forgive mine also!
This crime-what is it compared to that one?
And I, what am I, compared to my Lord?’
Saying this he gave his spirit to God.

I’ll conclude my discussion of the Holy Protomartyr himself with a brief excerpt from St Gregory Nyssen’s Second Homily on St Stephen:

But the works of the evangelical truth are a foretaste of piety and offer to the Lord the holy man Stephen [Stephanos] as the first fruits of what has been cultivated in the form of a crown [stephanos] from the harmony of many and various virtues. First this wonderful man bore witness to suffering and was chosen as a faithful man by the Apostles; he was filled with the Holy Spirit by whose power he became wise. He showed diligence for preaching the divine word, and great wonders of divine power confirmed his teachings. . . . He did not consider sufferings to be an impediment and did not hesitate to demonstrate zeal for his task; as a result, he became a great wonder and had the advantage of assuming hardship with a spirit of love. He endured sufferings, was concerned for souls, nourished them with bread, taught with words, offered bodily nourishment and set a spiritual feast because he was a good man and full of the Holy Spirit. [Stephen] was sustained by the goodness of his will to serve the poor and curbed enemies by the Spirit's power of the truth. . . . We should take notice of the protomartyr in order to give him his due which, because of the body's weakness, could not be completed yesterday. Today we wish to make memory of him along with the holy Apostles. Neither can praise of the saints be bound by days or time because ‘the memory of the just man remains forever’ [Ps 111.6]. As a result, their significance will remain unaltered. Therefore [praise of] the martyrs will not be without the apostles nor will the apostles be without the martyrs. The apostles are teachers of the martyrs, whereas the martyrs are images of the apostles. Indeed blessed Stephen bears their image and the stamp of the cross and was first to receive the crown of martyrdom through death.

St Stephen’s day—still celebrated the day immediately after Christmas in the West—is often known as ‘Boxing Day’ in the British Commonwealth because of the custom of boxing up gifts for the less fortunate on that day. It has also come to be associated with St Vatslav (Vyacheslav or Wenceslas), King of the Czechs (who is himself commemorated on 28 September), because of the Christmastide carol composed by John Mason Neale, which begins:

Good King Wenceslas looked out,
On the feast of Stephen,
When the snow lay round about,
Deep and crisp and even:
Brightly shone the moon that night,
Though the frost was cruel,
When a poor man came in sight,
Gathering winter fuel.

I don’t have time for a full account of St Vatslav here, but one can read a brief version of his Life in the Prologue here, and John Mason Neale’s telling of the legend (about which he wrote that ‘supposing it a legend, is a legend of such extreme beauty’) related in his Christmastide carol here. Here are the full lyrics of ‘Good King Wenceslas’.
Addendum: I have since written a post on St Wenceslas in which I include the full account of his life from the Prologue, John Mason Neale’s prose telling of the legend, and the complete lyrics of his carol. It can be found here.
Posted by Aaron Taylor at 9:21 AM

Seeing how St. Stepehn is our parish's patron saint, I was very surprised and delighted to read St. Augustin's account in the City of God of how St. Stephen's relics were brought through Hippo on a North African "tour." Many interesting things happened through his relics. Have you read this account?

Sadly, I have not, but thank you very much for bringing this to my attention. I shall have to read it, and perhaps write an addendum to this post!

Here is the text:

The account of St. Stephen picks up about halfway through. Enjoy!

Thank you, sir, I will! Though I may read it in my mellow old Modern Library edition rather than on the eye-straining computer screen.

That's where I read it!