St Isaac of Syria on the Incarnation 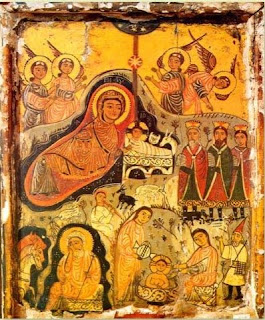 Okay, so one more thing. While I refuse to stay up crafting some long post, I thought I could at least share one of my favourite patristic passages on the Incarnation. As Metropolitan Hierotheos (Vlachos) has said, 'The divine incarnation is not offered for pious thoughts and sentimental or psychological analyses. . . . [I]n the end the mystery of the incarnation must be analysed within the atmosphere of Orthodox theology' (The Feasts of the Lord: An Introduction to the Twelve Feasts and Orthodox Christology, trans. Esther Williams [Levadia, Greece: Birth of the Theotokos Monastery, 2003], p. 60). So here's something that definitely falls into this category:

For humility is the raiment of the Godhead. The Word Who became man clothed Himself in it, and therewith He spoke to us in our body. Every man who has been clothed with it has truly been made like unto Him Who came down from His own exaltedness, and hid the splendour of His majesty, and concealed His glory with humility, lest creation should be utterly consumed by the contemplation of Him. Creation could not look upon Him unless He took a part of it to Himself, and thus conversed with it, and neither could it hear the words of His mouth face to face. (St Isaac the Syrian, The Ascetic Homilies of St Isaac the Syrian, trans. Dana Miller [Boston, MA: Holy Transfiguration Monastery, 1984], p. 381)

Lovely! I need this book. (This comment is to be applied to both volumes cited here.)

I quite agree--you do need these books! It seems to me that Met. Hierotheos's is rather unique in English, and I'd really like to see a translation of St Nicodemos's 'Eortodromion'. The St Isaac book, well, you know.