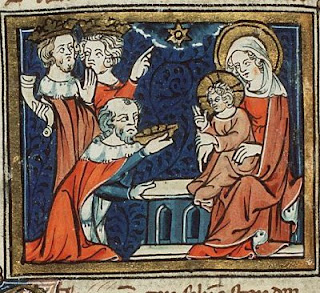 Although we Orthodox celebrate the Magi with the Feast of the Nativity and focus on the Baptism of our Lord on Theophany (see here for an article by Fr George Dragas on this difference in the Eastern and Western traditions), tonight can still rightly be called our ‘Twelfth Night’ simply by virtue of its being the twelfth night since Christmas. Unfortunately, my wife and I were forced by schedules to have our annual Twelfth Night party on Friday evening, making it technically ‘Tenth Night’. But we did have a ‘Galette des Rois’, a Queen of the Day, and a bowl of wassail (though, sadly, sans ‘Lamb’s Wool’). Also, a friend and I adopted Cockney accents to perform a rousing rendition of ‘I Saw Three Ships’ (the ships were originally those that brought the relics of the Magi to Cologne, Germany in 1163, but the story was changed to refer to Christ, the Theotokos, and St Joseph going to Bethlehem). One can find nearly all of the Twelfth Night info one needs for a Western-style celebration here, but just for good measure, here is what St Nicholas (Velimirović) has to say about the Magi, Ss Gaspar, Melchior, and Balthasar, under the ‘Reflection’ for 25 December:

The Lord Jesus, born in Bethlehem, was first worshiped by shepherds and wise men (astrologers) from the east-the simplest and the wisest of this world. Even today, those who most sincerely worship the Lord Jesus as God and Savior are the simplest and the wisest of this world. Perverted simplicity and half-learned wisdom were always the enemies of Christ's divinity and His Gospel. But who were these wise men from the east? This question was especially studied by St Dimitri of Rostov. He claims that they were kings of certain smaller regions or individual towns in Persia, Arabia and Egypt. At the same time, they were erudite in the knowledge of astronomy. This wondrous star appeared to them, which announced the birth of the New King. According to St Dimitri, this star appeared to them nine months before the birth of the Lord Jesus, i.e., at the time of His conception by the Most-holy Theotokos. They spent nine months in studying this star, in preparing for the journey and in traveling. They arrived in Bethlehem shortly after the birth of the Savior of the world. One of them was called Melchior. He was old, with long white hair and beard. He offered the Lord the gift of gold. The second was called Caspar, of ruddy face, young and beardless. He offered the Lord the gift of frankincense. The third was called Balthasar, of dark complexion and a very heavy beard. He offered the Lord the gift of myrrh. After their deaths, their bodies were taken to Constantinople, from Constantinople to Milan, and from Milan to Cologne. It can be added that these three wise men were representatives of the three main races of men that descended from Noah's three sons: Shem, Ham and Japheth. The Persian represented the Japhethites, the Arabian represented the Semites, and the Egyptian represented the Hamites. Thus it can be said that, through these three, the whole human race worshiped the Incarnate Lord and God.

wassail and Cockney accents... I missed out. :(

You totally did, dude.

My little G/Jaspar thinks well of your neo-Orthodox celebration. Or so I took his bouncing and cooing to mean.

Apropos the moment, my favorite character I ever played was Malvolio in Shakespeare's 'Twelfth Night' in acting school.

Well, I wish you could have been there! Perhaps you might have favoured us with a short performance of Malvolio's rebuke of Sirs Toby and Andrew and the Clown in Act II, Scene III? It would have been perfectly apropos.

Give me some notice next year and I'll break out my yellow stockings. No throwing me in prison if I show.

Okay, Chris, consider this your notice! Are you coming? In costume? ;-)

Alas, the wife has said I am no longer allowed to stuff my tights, which was really the key to my performance hilarity.

If you ever manage to make it to a more civilized region of the country, perhaps I could work something out. (civilized = northeast or upper midwest).

I enjoy wassail a lot. I think I will try and make this tomorrow, but what about a fasting cake recipe since the day before Theophany is always a strict fast day? Any recipe or link for one of those?

Arlie> Sorry, I couldn't find anything after a quick look. Unfortunately too, I'm no baker or cook, & I wouldn't know much about trying to work out my own fasting 12th Night cake.