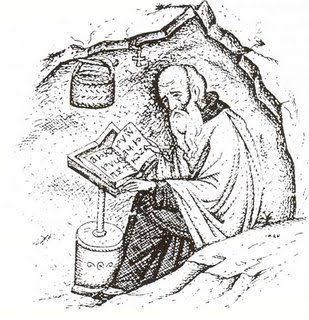 In this post, I talked about David Steinmetz’s article, ‘Uncovering a Second Narrative’, showing how his use of the detective story illuminated what the Fathers were up to in their exegesis. But Steinmetz made another point, just in passing, that I want to consider in its own right. Having talked about a few elements presupposed by the Fathers in their approach to Scripture, Steinmetz adds:

I have pointed out elsewhere the importance of what the Jesuits call discernment, the kind of insight that comes from disciplined prayer and long formation int he practices and habits of thought important to Christianity. When Athanasius argued that anyone who wants to understand the minds of the saints must first imitate their lives, he was touching on a theme no less important to the early Christian understanding of the Bible than apostolic succession and what I have called the distinction of first from second narratives. [1]

Steinmetz is alluding here to the very end of St Athanasius’s famous treatise On the Incarnation—that is, at de Incarnatione 57. There, the great Patriarch of Alexandria writes:

But for the searching and right understanding of the Scriptures there is need of a good life and a pure soul, and, for Christian virtue to guide the mind to grasp, so far as human nature can, the truth concerning God the Word. One cannot possibly understand the teaching of the saints unless one has a pure mind and is trying to imitate their life....Similarly, anyone who wishes to understand the mind of the sacred writers must first cleanse his own life, and approach the saints by copying their deeds. Thus united to them in the fellowship of life, he will both understand the things revealed to them by God and, thenceforth escaping the peril that threatens sinners in the judgment, will receive that which is laid up for the saints in the kingdom of heaven. [2]

In other words, the reading of Scripture is not only itself an act of ascesis (as I discussed here), but presupposes the practice of other forms of ascesis. Unfortunately, in his much-needed call for evangelicals to listen to the exegesis of the Fathers, Christopher Hall has concluded rather weakly from  his quotation of this passage from St Athanasius that the Scriptures ‘are safely interpreted only by those whose character is continually being formed by prayer, worship, meditation, self-examination, confession and other means by which Christ’s grace is communicated to his body.’ [3] While this is of course true, I’m afraid it still might leave the evangelical reader saying, ‘Well, I do all of that stuff, so I’m okay, right?’ Fortunately, St Gregory of Sinai in the 14th century articulates an idea very close to St Athanasius’s in a very striking (not to say intimidating!) way that leaves any of us little room for comfort:

An interpreter of sacred texts [Grammateus] adept [matheteutheis] in the mysteries of the kingdom of God is everyone who after practising the ascetic life [dia praxeos] devotes himself to the contemplation of God and cleaves to stillness [hesychian]. Out of the treasury of his heart he brings forth things new and old (cf. Matt. 13:52), that is, things from the Gospel of Christ and the Prophets, or from the New and Old Testaments, or doctrinal teachings and rules of ascetic practice, or themes from the Apostles and from the Law. These are the mysteries new and old that the skilled interpreter [o praktikos grammateus] brings forth when he has been schooled in the life of holiness.

An interpreter is one proficient in the practice of the ascetic life and still actively engaged in scriptural exegesis.... [4]

Aside from the very strong statement of the importance of asceticism in holiness for the interpretation of Scripture, I note that St Gregory speaks of bringing forth not only ‘doctrinal teachings’ but ‘rules of ascetic practice’ (praktika) from Scripture. This is not surprising if we recall, in the words of Metropolitan Hierotheos:

We can say briefly that to practise asceticism is to apply God’s law, to keep His commandments. The effort which we make to subordinate the will of man to the will of God, and to be changed by this, is called ascesis. We are well aware from the teaching of our holy Fathers that the whole Gospel consists of ‘precepts of salvation’. What is contained in Scripture is God’s commandment, which must be kept by those who seek their salvation. This is seen clearly in the Beatitudes (Matt. 5:1-12). [5]

Interestingly, the reference to the Beatitudes reminds me of a source apparently far removed from the Sinaite, but who nevertheless expressed an attitude that can be seen to be quite similar—Anglican divine, John Keble, quoted in Brian Daley’s article on patristic exegesis:

As we train ourselves, so also, according to our means, should we endeavour to prepare others, for the right study of the Bible. He who looks no deeper than the letter, may simply recommend candour, and patient investigation, and freedom from sensual and other disturbing thoughts: but he who knows beforehand, that the Personal Word is everywhere in the written Word, could we but discern Him, will feel it an awful thing to open his Bible; fasting, and prayer, and scrupulous self-denial, and all the ways by which the flesh is tamed to the Spirit, will seem to him no more than natural, when he is to sanctify himself, and draw near, with Moses, to the darkness where God is. And this so much the more, the more that darkness is mingled with evangelical light; for so much the more he may hope to see of God; and we know Who it is, that has inseparably connected seeing God with purity of heart. [6]

At any rate, I post all of this to stand as a stern warning to those of us who, while yet indulgers of our flesh who can’t watch with Him for one hour, think we can open the Scriptures from our comfy sofas and immediately perceive the deep wells of God’s mysteries within them. Obviously, I am speaking of myself here.

[6] Qtd. in Brian E. Daley, SJ, ‘Is Patristic Exegesis Still Usable? Some Reflections on Early Christian Interpretation of the Psalms’, Davis & Hays, pp. 79-80; from Tracts for the Times, no. 89, ‘On the Mysticism Attributed to the Early Fathers of the Church’.

Aaron, you have really left the best till last! Or is there more to come? That was a wonderful quote from Keble.

One of the things that struck me a couple of years ago was reading something that Father Boris Bobrinskoy wrote (I forget where), saying that we should always read the Gospel standing. I was quite taken aback as that was far from my practice, and even now I confess that I don't always do it (well, it depends on how I am reading it) but it gave me pause for thought. I don't know how universal that is (I am, after all, a neophyte in a rather unusual situation), or how literally he meant it (and I never had a chance to ask him) but it did raise a rather interesting point for me that has deeper implications!

Macrina> Yes, that makes sense to me, since it's so natural to approach the Gospels from within the liturgical life. When I read the Gospels, of course, it's usually in the context of reading the lectionary selections as part of a prayer rule, so I'm already standing anyway. But of course, I would think it's better to read the Gospels sitting than not to read them at all, which often ends up being my personal practice!

s-p> Would you mind elabourating a little? I took a look at the passage but I'd like your thoughts...