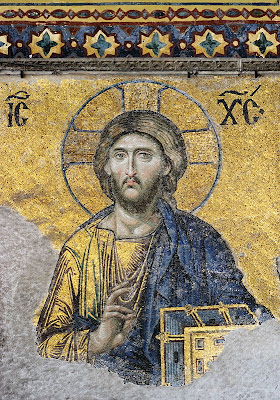 In my review of Peter Leithart’s generally quite welcome book, Deep Exegesis: The Mystery of Reading Scripture, I quoted from Wesley Hill’s questioning of one of the central objects of critique in the book—the tendency to treat the Scriptural letter as a husk theoretically separable from the kernel of the Scriptural message:

In the eras of the church’s defining Christological debates, it was not enough for the orthodox merely to attend to the Bible’s words, phrases, sentences, and paragraphs, since the meaning of those biblical forms was precisely what was up for grabs. Simplifying the matter drastically, we might say that two opposing kernels (Nicene orthodoxy and Arian Christology) were claiming identical husks (the shared language of Scripture). Arguably, the triumph of orthodoxy depended on being able to grasp the right kernel (the Bible’s message about the identity of Jesus) and fit it within a new, extra-biblical husk (the language of ousia). Ironically, given Leithart’s argument, it was the biblical kernel itself that pressured its defenders to set aside the biblical husk for a moment and cast about for a new one.

I was thinking about this criticism today as I read what Leithart calls a ‘witty and wise, and wittily wise’ article [1] by David Steinmetz, ‘Uncovering a Second Narrative: Detective Fiction & the Construction of Historical Method’. [2] While I at first felt no stake in defending this particular aspect of Leithart’s thesis, and as I said in my review, would still enjoy hearing the author’s response over a stout, Steinmetz had me working on a possible response of my own.

Steinmetz’s thesis is that traditional Christian exegesis can be compared to the detective in a mystery story. The story proper consists of a series of puzzling and often apparently random events and characters. Then at the end, the detective calls everyone into the room and offers a second narrative, one which ‘is identical in substance to the first and therefore replaces it, not as an extraneous addition superimposed on the story or read back into it, but as a compelling and persuasive disclosure of what the story was about all along.’ [3]

Steinmetz is quite modest and cautious about overstating the analogy. Right at the outset, he calls it only ‘a useful analogy’, [4] and once he has finished the description of the generic use of ‘second narratives’ in mystery stories, he writes, ‘Traditional Christian exegesis reads the Bible very much in this way—not exactly in this way, of course, but close enough to provide useful points of comparison.’ [5] Perhaps most touchingly, Steinmetz admits, ‘No analogy is perfect, and I can well understand if some objections to the analogy I have used in this essay have already occurred in the minds of readers otherwise sympathetic to my line of argument.’ [6] (He then does us the favour of suggesting a few such objections!) Finally, he notes, ‘The comparison is bound to break down once the reader moves past the limited point the analogy seeks to make. Analogy depends for its force on difference as well as similarity.’ [7] Still, Steinmetz’s analogy really is quite striking.

First of all, I would question whether the Fathers’ use of Scripture can really fairly be characterised as predicated on a husk/kernel dichotomy like the one Leithart is critiquing. Is the language of Scripture truly a ‘husk’ that can be set aside for the Fathers so that the Bible’s ‘message’ can be fit within a new one?

I doubt it. I strongly suspect that the Fathers would deny the appropriateness of such an analogy. They would likely prefer Origen’s comparison of the language of Scripture with the flesh of the passover lamb, which must be cooked in the fire of the Spirit ‘in order to have converse’ with Christ, not eaten raw and thus meriting ‘death and not life’. [8] But another way of looking at precisely the problem Hill raises is by means of Steinmetz’s analogy (which of course the Fathers did not have available). According to the Fathers, Steinmetz writes—

So, rather than see the Fathers as treating biblical language as a husk and the identity of Christ as a kernel expressible in another husk, I think we do better to see them treating biblical language as part of the first narrative of the detective story, and the regula fidei as the second narrative. The regula fidei is a way of ‘saving the appearances’ of the biblical language, of accounting for the evidence. Naturally, it will make use of biblical language itself (consider, for instance, how much of the Nicene Creed really is biblical language), but in order to explain, and not merely restate the words of Scripture, other words had indeed to be brought in. Note that the passage from Hill’s review equates the ‘new, extra-biblical husk’ with ‘the language of ousia’—on the husk/kernel analogy, to introduce a non-biblical word does indeed appear to be an example of this dichotomy at work. In fact, one suspects that the prior unconscious embrace of such a dichotomy is behind the readiness of some Sola Scriptura-types (I’m thinking of certain Baptists, rather than confessional Lutherans and Reformed) nevertheless to accept the Fathers’ credal response to the heretical Christologies.

But there is no dichotomy between the detective story’s first and second narratives. Just like the detective’s reiteration of the events of the story, but with missing details supplied, the Fathers’ second narrative was ‘identical in substance [now note the irony of this expression!] to the first and therefore replaced it, not as an extraneous addition superimposed on the story or read back into it, but as a compelling and persuasive disclosure of what the story was about all along.’ [11] In Brian Daley’s words, it ‘serves as the chief guide...to discovering the possible meaning of individual passages’. [12] To borrow Fr John Behr’s comments on the regula in general, even the word ousia itself, as part of the regula fidei elabourated by the Councils, ‘does not simply give fixed and abstract statements of Christian doctrine to be used as building blocks, as it were, for metaphysical systems, but expresses the correct hypothesis of scripture itself, the presupposition by which one can see in scripture the picture of a king, Christ, rather than a dog or fox.’ [13] Fr John writes:

The canon of truth [regula fidei] is thus inextricably connected...with ‘the order and the connection of the scriptures’, for it presents the one Father who has made himself known through the one Son by the Holy Spirit speaking through the prophets, that is, through the scriptures—the Law, the Psalms, and the Prophets. [14]

According to Fr Georges Florovsky, even for the most celebrated champion of the homoousion, St Athanasius, ‘the “scope” of the faith, or of the Scripture, is precisely their credal core, which is condensed in the “rule of faith”’. His use of this ‘scope’ in argument, however—

was still strictly scriptural, and, in principle, St Athanasius admitted the sufficiency of the Scripture, sacred and inspired, for the defense of truth (c. Gentes, I). Only Scripture had to be interpreted in the context of the living credal tradition, under the guidance of control of the ‘rule of faith’. This ‘rule’, however, was in no sense an ‘extraneous’ authority which could be ‘imposed’ on the Holy Writ. It was the same ‘Apostolic preaching’, which was written down in the books of the New Testament, but it was, as it were, this preaching in epitome. [15]

Such a view is, I think, far better expressed by Steinmetz’s analogy of the first and second narratives of detective stories than in terms of a ‘husk/kernel’ dichotomy like that which Peter Leithart has criticised. But perhaps I have missed something...

[9] Alluding to St Irenaeus’s famous accusations against the Gnostics in Book I of Against Heresies.

[13] Another allusion to St Irenaeus, Against Heresies I.8.1.