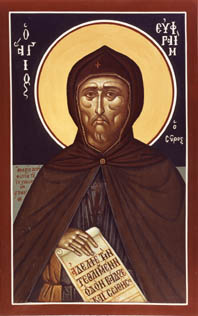 As a few readers may know, I spent the first couple of weeks after school got out for the summer working on an expansion and revision of the paper I presented at the C.S. Lewis & Inklings Society Conference (held here in OKC at Oklahoma City University two years ago) and posted here. The original paper was a very short, informal essay into the topic written quickly and intended to be read to about five or ten people in less than 20 minutes. But when it was considered for inclusion in an anthology of papers from the conference, the editors asked me to bring it a bit more up to snuff. The result is now entitled ‘Likeness & Approach: M.M. Bakhtin, C.S. Lewis, & the Liturgical Consummation of Literary Genre’.

One of the things that I did was to take the suggestion at the end that liturgical poetry could be read as a reconciliation of the virtues of both the novel (as described by Bakhtin) and epic poetry (as described by Lewis) and expand that into a full-fledged thesis, complete with an analysis of three examples of such poetry. Well, this didn’t go over as well with the editors as I’d hoped—at least the analysis didn’t—but since I was loathe to let something on which I’d expended some effort go entirely to waste, I thought I’d at least post it here, in three parts since it is longish. Now, I was never entirely happy with these analyses myself, and at one point was in utter despair that they were even coherent at all. Of course, taken out of context of the entire paper, they will likely be even less coherent. But perhaps someone will get something out of it.

I have included the paragraph—some form of which will still appear in the final paper—immediately preceding the analysis sections to give at least a little bit of context, but maybe I should add one more thing. The distinction between ‘nearness to God by likeness’ and ‘nearness to God by approach’ is one that I have taken from Lewis’s The Four Loves and used as a framework for my analyses of Bakhtin and Lewis on genre. Earlier in the paper I wrote:

He [Lewis] uses the analogy of walking down a mountain towards a village—at any point, one may be quite near the village in the sense of being on a cliff directly above it (corresponding to  ‘nearness by likeness’), but the only way actually to approach the village is by means of the apparently greater distance constituted by a winding path (corresponding to  ‘nearness by approach’). [1] According to this distinction, examples of nearness by likeness would be qualities like beauty, strength, majesty, but nearness of approach would be characterised first and foremost by humility and obedience.

So, hopefully that will be sufficient background for most readers to get some idea of what I’m up to here. Now, back to the lecture at hand:

That said, exactly how does liturgical poetry constitute the ‘consummation’ of literature? The short answer, as should be apparent by now, is that it possesses and communicates not only the virtues of Bakhtinian pre-novelistic and novelistic literature, i.e., nearness to God by approach, but also the virtues of Lewisian, ritualistic epic literature, i.e., nearness to God by likeness. While the latter quality, however, is inherent in the poetic form and liturgical setting of the poetry—it is a ritual genre after all—the nearness of approach in liturgical poetry may require a few examples to be clearly seen. This paper will focus on three, one from each of the three major cultural divisions of ancient Christendom: from the Syriac, the hymn de Fide 31 of St Ephrem the Syrian referred to above; from the Latin, St Venantius Fortunatus’s famous Vexilla Regis; and from the Greek, the Paschal Canon of St John Damascene.

a) St Ephrem the Syrian

In his journal entry for Ash Wednesday, 1747, John Wesley famously wrote of St Ephrem the Syrian (c. 306-373), ‘Surely never did any man, since David, give us such a picture of a broken and contrite heart’, [2] while Robert Murray has called the Syriac Father ‘the greatest poet of the patristic age and, perhaps, the only theologian-poet to rank beside Dante’. [3] St Ephrem is firmly within the Christian liturgical-poetic tradition of approach/likeness. Although he ‘probably did not know Greek’, Sebastian Brock points out that ‘by the fourth century AD, Greek and Semitic cultures had already been interacting in the Middle East for over half a millennium: no Syriac writer of Ephrem’s time is going to be purely Semitic in character or totally unhellenized…’. [4] Thus, St Ephrem’s poetry certainly does not belong with the truly ‘monoglot’ classical genres. That said, St Ephrem worked primarily within two poetic genres peculiar to the Syriac language: the madrasha and the memra. The former—from which genre the present example is chosen—is a stanzaic form, punctuated by a refrain and based on repeating syllabic patterns, that is, regular numbers of syllables. [5] The intermingled faithful of a Syrian congregation—a local gathering of what St Ephrem calls ‘the Church of the Nations’ [6]—would have participated in St Ephrem’s madrasha by singing the refrain, anticipating the kind of ‘call and response’ performance that Mara Scanlon identifies with Bakhtin’s ‘polyglossia’ and ‘dialogism’. [7]

St Ephrem’s cycle ‘On Faith’ includes a madrasha particularly germane to the present thesis—Hymn 31. [8] After an initial stanza calling for thanksgiving for the various anthropomorphisms of Scriptural language about God, the second stanza of this hymn reads:


We should realize that, had He not put on the namesof such things, it would not have been possible for Himto speak with us humans. By means of what belongs to us did He draw close to us.He clothed Himself in our language, so that He might clothe usin His mode of life. He asked for our form and put this on,and then, as a father with his children, He spoke with our childish state. [9]

The virtues of God being celebrated here, then, are not epic qualities like His majesty and power—in 4.2, it is said that God ‘became like a Hero, a Valiant Warrior’, but the mutability suggested by the verb and the comparative ‘like’ demonstrate that this is every bit as metaphoric as the other ‘terms that He has put on’ in 3.1. [10] Rather than praising God’s ‘likeness’ attributes, this hymn is celebrating precisely God’s condescension: God is the Hero Who drew ‘close to us’ and ‘spoke with our childish state.’ It is a celebration, moreover, in which all strata of society could participate, and thus the hymn exalts ‘them of low degree’ (Luke 1:52), to borrow the language of the Authorised Version. Kathleen McVey has noted that St Ephrem incorporated into the praise of God a class certainly not to be identified with ‘the ruling social group’ [11]—women. [12] In the words of a memra on St Ephrem by Jacob of Sarug:

By you even the sisters are strengthened to speak.
Your instruction has opened the closed mouth of the daughters of Eve,
and with their voices throngs of crowned women are singing out,
and women teachers are being called into the congregations—
a new vision that women will speak the Gospel! [13]

This opening of ‘the closed mouth of the daughters of Eve’ surely belongs with the ‘scandal scenes, eccentric behavior, inappropriate speeches and performances’ that characterize pre-novelistic discourse, [14] and it reminds the modern reader that St Ephrem’s voice is not merely his own, but ‘a voice that feels a possible choral support outside itself’. [15] Finally, the irony that Bakhtin considers inimical to the ancient genres and crucial to the pre-novelistic ones, the ‘laughter that destroys the epic’ [16] can be found in the sixth and seventh stanzas of St Ephrem’s hymn, where Brock notes ‘an undertone of subtle humour, [as St Ephrem] compares God’s efforts to teach humanity about himself to those of someone who is attempting, with the aid of a mirror, to teach a parrot to talk’. [17] A poetry of humor, however subtle, gives voice to the consciousness of human beings who must cease taking themselves too seriously in order to draw near to God by approach.

[10] Ibid., p. 21. Obviously, I am more than a little hampered in analysing the diction of St Ephrem’s poetry by my complete lack of Syriac!

Despite my best efforts, I couldn't get the longish quote from St Ephrem to format right. Sometimes Blogger is just so frustrating!