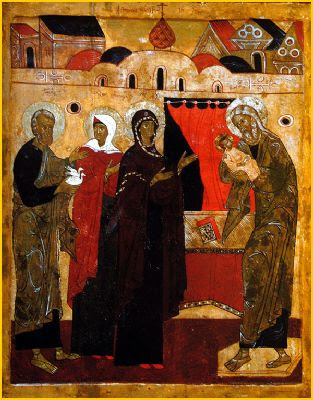 One or two readers may have wondered whether I planned to start posting more Triodion-relevant stuff, now that the Sunday of the Prodigal Son is upon us and there are only two weeks left until we embark upon the Great Fast. I guess I assumed I would, but now I’m starting to think that perhaps it would be better to focus on the menology stuff here at Logismoi. My friend Justin has asked me to contribute to a new blog, Journey of Fasting, where I will be posting anything related to the Triodion that I find particularly interesting or helpful, and some of that may find its way onto this site. But I also want to try not to lose track of the daily Saints and Feasts, and between the Triodion and the Menaion there’s just more than one blog can handle, I believe. Furthermore, let’s not forget about all of the wonderful blog topics that have nothing to do with the calendar. I don’t want to overwhelm Logismoi readers with material based on every conceivable liturgical cycle in the Orthodox Church.

So all of that is a long prelude to a post about the Great Feast of the Meeting of Our Lord, God, and Saviour Jesus Christ, based on St Luke 2:22-40, which we celebrate today, as Felix Culpa says, in a ‘(rather unusual) double commemoration’ with the Sunday of the Prodigal Son. Metropolitan Hierotheos (Vlachos) writes concerning this Feast (The Feasts of the Lord: An Introduction to the Twelve Feasts and Orthodox Christology, trans. Esther Wiliams [Levadia, Greece: Birth of the Theotokos Monastery, 2003], pp. 93-4):

According to St Athanasios the Great, it is our task to liken ourselves to righteous Symeon and the Prophetess Anna. We too must meet Christ with wisdom, purity, guilelessness, forgiveness and in general with love for God and mankind. No one can meet Christ, the true life, in any other way.

The meeting of Christ shows that Christ is the life and light of men and that man should aim to attain this personal light and personal life. The Church sings, by way of exhortation, ‘Illuminate my soul and the light of my senses, that I may see Thee in purity; and I will proclaim that Thou art God’ [from the Greek megalynaria of the Ninth Ode for Matins of the Feast; see Mr Mary and Archim. Kallistos Ware, trans., The Festal Menaion (South Canaan, PA: St Tikhon’s Seminary, 1998), p. 427]. In order for anyone to proclaim God, he must see Him clearly. Only those who see God or at least accept the experience of those who see, can become teachers. But in order to see God one must previously be illuminated, shine in soul and bodily senses. Then the feast of the Meeting of Christ also becomes a feast of the meeting of every believer.

What the Metropolitan says here about our meeting Christ in imitation of St Symeon is echoed by the penultimate sticheron (Tone One) from ‘Lord, I have cried’ during Great Vespers of the Feast, 'Come, and with divine songs let us also go to meet Christ and let us receive Him whose salvation Simeon saw. This is He whom David announced: this is He whose words the prophets uttered, who for our sakes has taken flesh and speaks to us in the Law. Let us worship Him' (Menaion, p. 408). In words attributed to St Ephraim the Syrian (Homily on Our Lord:57), ‘This is the Godhead Whom though all creation cannot contain, yet a lowly and humble soul suffices to receive Him.’

There is an interesting chapter in the biography of Fr Seraphim (Rose), where Fr Damascene tells about the young Eugene Rose’s fascination with a composition of Bach written for today’s Feast, and based on St Symeon's hymn, the Nunc dimittis: Cantata no. 82, Ich Habe Genug, which Fr Damascene calls ‘a stirring expression of man’s longing for the heavenly realm, to go beyond this “vale of tears”’ (Hieromonk Damascene, Father Seraphim [Rose]: His Life and Works [Platina, CA: St Herman of Alaska Brotherhood, 2003], p. 48). One can read the German text here. I shall give an English translation (from this site):

1. Aria (B)
I have now enough,
I have now my Savior, the hope of the faithful
Within my desiring embrace now enfolded;
I have now enough!
On him have I gazed,
My faith now hath Jesus impressed on my heart;
I would now, today yet, with gladness
Make hence my departure.

2. Recit. (B)
I have now enough.
My hope is this alone,
That Jesus might belong to me and I to him.
In faith I hold to him,
For I, too, see with Simeon
The gladness of that life beyond.
Let us in this man's burden join!
Ah! Would that from the bondage of my body
The Lord might free me.
Ah! My departure, were it here,
With joy I'd say to thee, O world:
I have now enough.

3. Aria (B)
Slumber now, ye eyes so weary,
Fall in soft and calm repose!
World, I dwell no longer here,
Since I have no share in thee
Which my soul could offer comfort.
Here I must with sorrow reckon,
But yet, there, there I shall witness
Sweet repose and quiet rest.

4. Recit. (B)
My God! When comes that blessed 'Now!'
When I in peace shall walk forever
Both in the sand of earth's own coolness
And there within thy bosom rest?
My parting is achieved,
O world, good night!

5. Aria (B)
Rejoicing do I greet my death,
Ah, would that it had come already.
I'll escape then all the woe
Which doth here in the world confine me.

It is a beautiful piece (I inherited a recording from a friend when he gave us his car), and Fr Damascene describes Eugene as playing it ‘over and over’, adding that in Eugene’s estimation, ‘This was not just beautiful music, composed by an extremely refined genius; rather, it had obviously been written by a man who had experienced God and the immortality of his own soul, and who used the language of music to describe this experience’ (p. 49).

In the West, today’s Feast has traditionally been known as the ‘Feast of the Purification’, because of the ‘days of purification’ to which the Theotokos had submitted (Luke 2:22), as well as ‘Candlemas’, because of the custom of blessing candles. According to Robert Herrick (1591-1674), Candlemas Eve is the day to take down the Christmas decorations (Alexander M. Witherspoon and Frnak J. Warnke, eds., Seventeenth-Century Prose and Poetry, 2nd ed. [NY: Harcourt, 1963], p. 823; also available here):

Down with the rosemary and bays,
Down with the misletoe;
Instead of holly, now upraise
The greener box, for show.

Then youthful box which now hath grace
Your houses to renew;
Grown old, surrender must his place
Unto the crispèd yew.

When yew is out, then birch comes in,
And many flowers beside;
Both of a fresh and fragrant kin
To honour Whitsuntide.

Green rushes, then, and sweetest bents,
With cooler oaken boughs,
Come in for comely ornaments
To re-adorn the house.
Thus times do shift; each thing his turn does hold;
New things succeed, as former things grow old.

Take a look at the Fish-Eaters page for more on the Western traditions for Candlemas. On the Eastern side of things, Felix Culpa has linked to Fr Ephrem’s translation of the liturgical texts for the Feast, as well as several other relevant materials. I assume all are familiar with the great Rakhmaninov’s setting of St Symeon’s hymn in the Church Slavonic language. If not, here is a pretty good recording along with some artistic depictions of this event.
Posted by Aaron Taylor at 1:07 AM