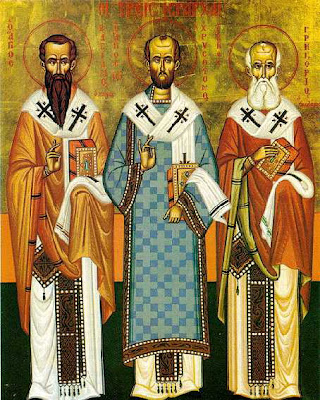 Today, 30 January on the Church’s calendar, we celebrate the Synaxis of the Three Great Œcumenical Teachers: Ss Basil the Great, Gregory the Theologian, and John Chrysostom. In the 11th century, during the reign of Emperor Alexius I Comnenus, there was ‘a contention among men of high repute and virtue’ about which of these three was the greatest (The Lives of the Three Hierarchs, comp. and trans. Holy Apostles Convent [Buena Vista, CO: Holy Apostles Convent, 1998], p. 303). Then, according to the Great Synaxaristes—

a visitation, not a vision, was vouchsafed to Metropolitan John Mavropous (c. 1050-75) of Evchaita (pron. Evhaëta), a holy hierarch who attained to the summit of virtue. He was a notable and erudite man, well acquainted with Hellenic wisdom, as his writings bear witness to his learning. He was also acclaimed for his writing of hymnographic canons and the lives of the saints.

Metropolitan John affirmed that the three holy hierarchs appeared to him, first individually, then together. He says that they spoke to him as with one mouth saying, ‘We are as one before God. Even as thou dost see, we neither have any opposition to one another nor have any quarrel among ourselves; but in accordance with the times in which we happened to live, each of us, mvoed by the divine Spirit, taught and wrote about various themes. Now as much as we learned by the Holy Spirit, these same teachings were also published for the salvation of the people. There exists among us no first or second place; for if the one should speak, straightway the other two also are in agreement. For this reason, command the rivaling factions not to remain divided on account of us; for we are concerned and eager to bring peace, unity and oneness of mind among the faithful, and not to be the cause of division. Therefore, when it seems fitting to thee, unite our commemorations on one day, and compose a troparion for the feast; for we are as one before God. And be certain that we shall cooperate towards the salvation of those who celebrate our general commemoration, since we have boldness before God.’ (Lives, pp. 304-6)

Thus, by instituting the common feast under the direct inspiration of the Three Hierarchs themselves, Metropolitan John ‘aimed on the one hand to bring unity to the Church and on the other to set up these three great Fathers and œcumenical teachers as the model par excellence of “allies” of the Triune God and “champions” of trinitarian dogma’ (Anestis Keselopoulos, Προτάσεις Ποιμαντικής Θεολογίας [Thessaloniki: Pournaras, 2003], p. 15). St Nicholas (Velimirović) has written a beautiful poem for the Three Hierarchs in the Prologue:

Fasting and Faith - Basil,
Theology - Gregory,
Acts of Charity - Chrysostom,
Golden mouths, mouths of honey!
All laborers of one work;
Three separately - three angels,
The three together as God is one,
No one is the main one, no one is secondary.
In eternity, they all agree,
You invoke one, all three help,
You hymn one, all three hear,
You glorify one, all three rejoice.
Three men, one whole;
Three hierarchs, one deed;
Three names, one glory;
To all three of them, Christ is the Head.

Of course, in Greece, and perhaps also in other Orthodox countries, the Feast of the Three Hierarchs is the patronal feast of students and learning, but Fr John Romanides has denounced ‘the particular form it has taken in Greece, portraying the three hierarchs as a continuation of the great Hellenic spirit of ancient Greece’, rather than focusing precisely on their Christian character (Patristic Theology: The University Lecture of Fr John Romanides, ed. Monk Damaskinos Agioreitis, trans. Hieromonk Alexios [Trader] [Thessaloniki: Uncut Mountain, 2008], p. 66).
Posted by Aaron Taylor at 12:00 AM

I was really enjoying that. Shame you ended it so abruptly. Perhaps you should build on this.

My apologies, dear Basil, I was trying to get to bed earlier than usual and, to make matters worse, was a bit short on imaginative ideas for a 3 Hierarchs post. I don't have enough direct experience myself of the Greeks' tendency in regard to this problem to offer a sustained critique (here, you would be the logical person to write something!), and I didn't want to get into an immense consideration of Hellenism and the Orthodox Tradition in the context of a little blog post. One day, perhaps!

I AM glad you liked what I have, truncated as it is!