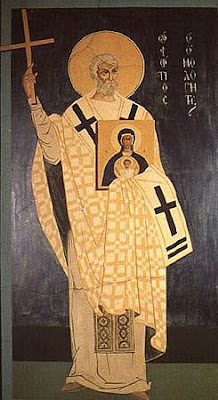 Today, 6 February on the Church’s calendar, we commemorate St Photius the Great (810-891), Patriarch of Constantinople. I don’t see any need to recount his whole life—one can find Despina White’s account here (though watch out: her date for his birth, claim that he was a professor, and apparently much else, are questionable), Francis Dvornik’s here (same problems with the date and career, though he has the excuse of having written before Lemerle), and Sergei Bulgakov’s here. Besides, there are a number of more incidental things upon which one might focus with interest.

It is a commonplace to remark upon St Photius’s learning. In the first place we have the testimony of Nicetas of Paphlagonia, his contemporary and ‘fiercest enemy’ (Fr Justin [Popovich], ‘The Life St Photios’, trans. Ronald Wertz, On the Mystagogy of the Holy Spirit, St Photius the Great, trans. Holy Transfiguration Monastery [NY: Studion, 1983], p. 35):

In worldly wisdom and reasoning, he was viewed as the most capable person in the Empire. He had studied grammar and poetry, rhetoric and philosophy, the healing arts, and almost every other worldly science. In all of these he not only surpassed all others of his time, but even competed with learned men of earlier times [and, we are tempted to add, of later ones!]. He succeeded in all things, and all things benefitted him: his natural capabilities, his diligent learning, and his wealth by which every book was able to find its way to him.

It is an assessment that is unanimously echoed by modern scholars. Fr Andrew Louth calls St Photius ‘the most famous scholar of the ninth century’ and his learning ‘immense’ (Greek East and Latin West: The Church AD 681-1071, Vol. III in The Church in History [Crestwood, NY: St Vladimir’s Seminary, 2007], p. 158, 159). Anthony-Emil Tachiaos calls him a man ‘of broad and sound scholarship, whose knowledge encompassed the whole spectrum from classical literature to theology, philosophy, and applied sciences’ (Cyril and Methodius of Thessalonica: The Acculturation of the Slavs [Crestwood, NY: St Vladimir’s Seminary, 2001], p. 27). L.D. Reynolds and N.G. Wilson are in awe of St Photius (Scribes & Scholars: A Guide to the Transmission of Greek & Latin Literature, 2nd ed. [Oxford: Clarendon, 1974], p. 56):

The sudden appearance of so distinguished a person after the obscurity that had previously reigned is remarkable; it is all the more strange that nothing is known of the identity of his tutors, nor of the sources from which he was able to acquire knowledge of so many rare texts.

Reynolds and Wilson note that St Photius’s Bibliotheca, or Myriobiblos (a translation of much of which can be found here), ‘in which Photius shows himself the inventor of the book-review’, is extremely value for its descriptions of the contents of many books that are no longer extant: ‘that applies for example to some twenty of the thirty-three historians he discusses’ (p. 55). They also credit St Photius and his salon, coupled perhaps with the formal university in Constantinople, with initiating ‘a practically continuous tradition of classical studies in Byzantium’ (p. 57), which is of course the source of most of the classical works now in existence. The Codex Clarkianus, for instance, a manuscript of Plato commissioned by one of St Photius’s disciples, is an important authority for Platonic texts.

But it might be noticed that Nicetas’s description of St Photius’s learning, and with it those of many recent scholars, is quite secular in tone. It is easy to forget that we are speaking of a man whom we Orthodox regard as holy. Fr Justin follows up his quotation of this passage from Nicetas with an account of St Photius’s intellectual activities that place them in their true, spiritual light (pp. 35-6):

After having studied literature, mathematics, and Aristotelian philosophy, as well as other disciplines, Photios pursued the divine science of the Holy Scriptures and the theology of the Holy Fathers of the Church under the wise and learned men of his time. He himself says that he learned theology from a wise and experienced ‘elder’.

[Later in this paragraph, Fr Justin has the following footnote:] For St Photios and the Byzantines, the pursuit and acquisition of knowledge could not be accomplished without prayer and spiritual ascesis. The ultimate goal was always union with God and θέωσις (deification). Consequently, knowledge for its own sake had little validity, since outside the truth kept by the whole Church, personal experience was deemed to be deprived of all certainty and objectivity, being rather a mingling of truth and of falsehood. Instead of assimilating the wisdom of God to man’s mode of understanding and anthropocentric categories, one was expected to look for a profound change, an inner transformation that enabled one to experience divine wisdom. That St Photios, the Byzantines, and the Church Fathers in general actively pursued secular learning and indeed were highly educated, manifests their attitude that secular knowledge could be useful but required spiritual discernment.

Of course, those of us who are children of the Slavic churches owe St Photius another debt. It was he who, having contributed directly to the education of St Cyril, the Apostle to the Slavs (Tachiaos, p. 27), encouraged his career and that of his brother St Methodius, and finally sent them on their mission, first, to the Khazars in southern Russia, and second, to the Slavs of Moravia. Fr Justin writes:

To that end [i.e., the spreading of Christ’s Gospel among people who had not yet heard it], he, together with the Emperor, sent the two renowned Thessalonian brothers Constantine (his pupil and friend who was later renamed Cyril) and Methodios, a monk from Mt Olympos in Bithynia, to the Khazars in the south of Russia. There these blessed brothers preached the Holy Gospel with success, so that by 860 many of those pagans accepted the Faith. Thus St Photios began to Christianize the great Russian nation, sending them their first bishop and pastor.

A little later, when emissaries of the Moravian Prince Ratislav came to Constantinople to request of the Emperor and Patriarch a preacher of the Gospel and clergy who knew the Slavonic language, so that the evangelical Faith and customs could be established among the Slavs in Moravia, the holy Patriarch and the Emperor sent to them the same holy brothers (863). Thus they became the spiritual parents of all the Slavic peoples everywhere, for Cyril and Methodios and their disciples spread the Gospel of Christ not only among the Slavs of Moravia, but throughout the entire Balkans and surrounding areas. (Fr Justin, p. 48)

Anyway, Felix Culpa has linked to an interesting article on St Photius as an exemplar of tolerance by Met. Emilianos (Timiades). But I’ll let what I’ve already said suffice for my tribute to St Photius the Great, with the possibility that perhaps I’ll post a tidbit or two later. In closing, I’ll leave you with an Apolytikion in his honour taken from Constantine Cavarnos’s St Photios the Great: Philosopher and Theologian (Belmont, MA: Institute for Byzantine and Modern Greek Studies, 1998), p. 45:

As a radiant beacon of wisdom hid in God
and a defender of Orthodoxy revealed from on high,
O great Photios, blest adornment of the Patriarchs,
thou didst refute the innovations of the boastful heresy,
O light of the Holy Churches,
which do thou keep from all error,
O luminary of the East.