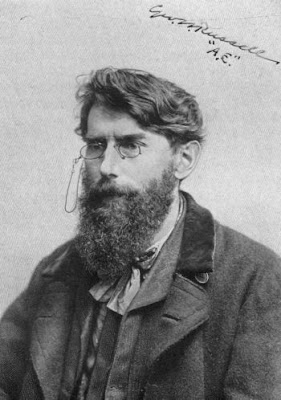 Probably one of my favourite essays of all time is Helen Waddell’s ‘Introduction’ to her translation of Latin material on the Desert Fathers, The Desert Fathers, trans. Helen Waddell (NY: Vintage, 1998). The essay had a profound influence on me, and I know I’ve mentioned it on Logismoi a time or two (or three). Well, at one point, Waddell is masterfully telling the story of the discovery of the Vita S. Antonii by a friend of St Augustine, who in turn acquainted the future Bishop of Hippo with it. As she tells of the providential reading of the book in ‘a small house outside the walls of Treves’ (p. 4), she quotes without identification of author or title a snippet of verse (p. 5): ‘As he read, ambition fell from him: about him was the

It wasn’t until long after my initial reading of this essay that I finally made up my mind to try to discover the source of the quotation. A Google search for this phrase in quotes yields only the Google Books text of Waddell’s own volume. Remove the quotes and things become too diffuse. If, however, one leaves the phrase ‘twilight air’ in quotes, accompanied only by ‘anchorites’ and ‘kings’, the second result (after Waddell’s book) is a Scribd document of a book called The House of the Titans and Other Poems by ‘Æ’, that is, the Irish writer and theosophist, George William Russell (1867-1935). In the title poem (The House of the Titans and Other Poems [Teddington, UK: Echo Library, 2007], pp. 2-24), we find the following lines:

I can stay the march of armies by a child.
When I look through its eyes the passionate hand
Falls, and the soul in awful penitence
Hides in itself. And with a twilight air
I can make anchorites of kings. I overcome
Fierce things by gentleness. And my allies
Against the thunder of congregated powers
Are silences in heaven, the light in valleys,
The smoke above the roof, the quiet hearth,
The well-beloved things that come to be
Images of peace in the All-Father’s being. (pp. 19-20)

It appears Russell was a friend of Yeats (who dedicated Rosa Alchemica, The Tables of the Law and The Adoration of the Magi [1897] to him—W.B. Yeats, Mythologies [NY: Collier, 1974], p. 265), and was written by Joyce into Ulysses as a character who argues with Dedalus about Shakespeare.
Posted by Aaron Taylor at 12:00 AM

It is an archetypal thing - many British kings became Anchorites, as did some English kings after them. Hooray for the Celtic Revival! ;)

Thank you. Researching that lovely line in Waddell brought me here.

It IS a lovely line! I'm glad to know someone else appreciated it and got curious enough to come here.