'The Saviour Has Transfigured Disfigured Man'—The Feast of the Transfiguration 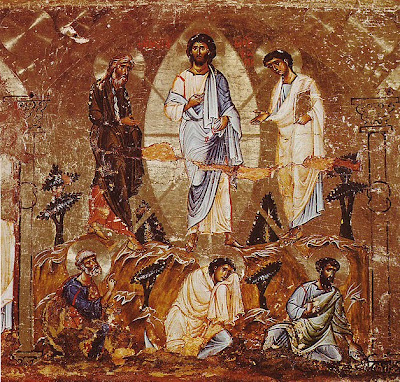 Today, 6 August on the Church’s calendar, we celebrate the Holy Transfiguration of our Lord and God and Saviour Jesus Christ. I don’t intend to offer my own comments on this Great Feast of the Church, as the awesomeness of Christ’s manifest glory is so far beyond my experience. I will confine myself to offering a few appropriate texts, in this way making a small beginning of following the words of the first sticheron (in Tone 4) at ‘Lord, I have cried’ at Small Vespers for the Feast (The Festal Menaion, trans. Mother Mary and Archim. [Metropolitan] Kallistos [Ware] [South Canaan, PA: STS, 1998], p. 468):

Come, let us rejoice, mounting up from the earth to the highest contemplation of the virtues: let us be transformed this day into a better state and direct our minds to heavenly things, being shaped anew in piety according to the form of Christ. For in His mercy the Saviour of our souls has transfigured disfigured man and made him shine with light upon Mount Tabor.

First of all, it strikes me that perhaps the definitive word on the Holy Transfiguration has been spoken by St Gregory Palamas, Archbishop of Thessaloniki, in the text he drafted as a statement on behalf of the entire Holy Mountain concerning the controversy with the notorious heretic Barlaam (The Philokalia: The Complete Text, Vol. 4, trans. G.E.H. Palmer, et al. [London: Faber, 1998], p. 422):

4. If anyone maintains that the light which shone about the disciples on Mount Tabor was an apparition and a symbol of the kind that now is and now is not, but has no real being and is an effect that not only does not surpass comprehension, but is inferior to it, he clearly contends against the doctrines of the saints. For the saints both in hymns and in their writings call this light ineffable, uncreated, eternal, timeless, unapproachable, boundless, infinite, limitless, invisible to angels and men, archetypal and unchanging beauty, the glory of God, the glory of Christ, the glory of the Spirit, the ray of Divinity and so forth. The flesh of Christ, it is said, is glorified at the moment of its assumption and the glory of the Godhead becomes the body’s glory. But this glory was invisible in His visible body to those unable to perceive that upon which even angels cannot gaze. Thus Christ was transfigured, not by the addition of something He was not, nor by a transformation into something He was not, but by the manifestation to His disciples of what He really was. He opened their eyes so that instead of being blind they could see. While He Himself remained the same, they could now see Him as other than He had appeared to them formerly. For He is ‘the true light’ (Jn 1:9), the beauty of divine glory, and He shone forth like the sun—though this image is imperfect, since what is uncreated cannot be imaged in creation without some diminution.

Second, Met. Hierotheos (Vlachos) of Nafpaktos, following St Nicodemus of the Holy Mountain, emphasises that the ‘second sun [of Christ’s divinity] was incomparably higher than the sensible sun, which rose from the heavens’, adding that ‘just as with the rising of the sensible sun all the stars in the sky disappear, so too the rays of the sensible sun disappeared with the rising of the sun of righteousness’ (The Feasts of the Lord: An Introduction to the Twelve Feasts and Orthodox Christology, trans. Esther Williams [Levadia, Greece: Birth of the Theotokos Monastery, 2003], p. 150). In reference to this, His Eminence sites the second troparion from Canticle 4 of the second canon at Matins: ‘The visible sun was eclipsed by the rays of Thy divinity, when it saw Thee transfigured on Mount Tabor, O my Jesus. Glory to Thy power, O Lord’ (Menaion, p. 486).
Furthermore, in keeping with the words of the first troparion I quoted (above), Met. Hierotheos also writes:

It says repeatedly in Holy Scripture that Christ is the new Adam, who became man in order to correct the error of the ancestral Adam. The first Adam in Paradise, although he was still inexperienced, was in a state of illumination of his nous because that in him which was in the image was pure and received the rays of the divine light. But after his sin, he was darkened, he lost the likeness, but did not lose the image entirely. . . . Through the incarnation of Christ and the deification of human nature Adam came back to his former glory, and indeed rose still higher.
Thus on Tabor Christ showed what the prototype of the creation of man was like and what the first state of Adam was like in Paradise before the fall. (p. 154)

St Maximus the Confessor has composed an interesting interpretation of the Holy Transfiguration in his ‘Second Century on Theology and the Incarnate Dispensation of the Son of God’, in which he touches on the appearance of the Prophets Moses and Elijah on the mountain with Christ (The Philokalia: The Complete Text, Vol. 2, trans. G.E.H. Palmer, et al. [London: Faber, 1990], pp. 140-1):

14. When the Logos of God becomes manifest and radiant in us, and His face shines like the sun, then His clothes will also look white (cf. Mt 17:2). That is to say, the words of the Gospels will then be clear and distinct, with nothing concealed. And Moses and Elijah—the more spiritual principles of the Law and the prophets—will also be present with Him.

16. He who to some degree has been initiated into the inner principle of the divine unity invariably discovers the inner principles of divine providence and judgment conjoined with it. That is why, like St Peter, he thinks it good that three tabernacles should be made within himself for those who have appeared to him (cf. Mt 17:4). These tabernacles represent three stages of salvation, namely that of virtue, that of spiritual knowledge and that of theology. The first requires fortitude and self-restraint [σωφροσύνη] in the practice of the virtues: of this the type was Elijah. The second requires right discernment in natural contemplation: Moses disclosed this in his own person. The third requires consummate perfection of wisdom: this was revealed by the Lord. They were called tabernacles, or temporary dwellings, because beyond them are other still more excellent and splendid stages, through which those found worthy will pass in the age to be.

Finally, Victor-Antoine d'Avila-Latourrette, OSB, in his charming little book, A Monastic Year: Reflections from a Monastery (Dallas: Taylor, 1996), reminds us:

In the Eastern Christian tradition, the feast of the Transfiguration is also the feast of the harvest. On this day Eastern Christians keep the old custom of rendering thanks to the Lord of the harvest by bringing to the church and offering him their first vegetables, fruits, herbs, and flowers. Here in the monastery, after the Liturgy we have the traditional blessing of the produce of our garden. This is a symbol of the earth itself being made new by the presence of Christ, rendering in homage its first fruits to its Lord and Master. (p. 128)