'The Light of a Thousand Suns'—Hiroshima Day 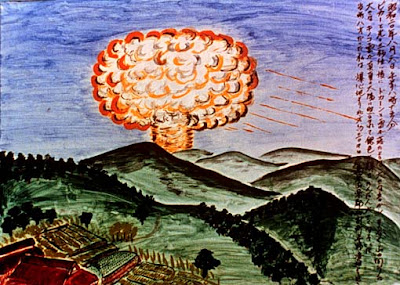 In the last post I quoted the second canon at Matins for the Feast of the Holy Transfiguration:

The visible sun was eclipsed by the rays of Thy divinity, when it saw Thee transfigured on Mount Tabor, O my Jesus. Glory to Thy power, O Lord.

This teaching about the revelation of Christ’s glory outshining the sun, and the Gospel references to the ‘cloud’ overshadowing the disciples, remind me sadly of another event remembered on 6 August—according to the New Calendar—the bombing of Hiroshima, Japan. At the Trinity nuclear test, a stunned Robert Oppenheimer is said to have recalled a verse from the Bhagavad-Gita, in stanza 12 of ‘The Eleventh Teaching’ (The Bhagavad-Gita: Krishna’s Counsel in Time of War, trans. Barbara Stoler Miller [NY: Bantam, 1986], p. 99):

If the light of a thousand suns
were to rise in the sky at once,
it would be like the light
of that great spirit.

And moments later Oppenheimer also thought of the earlier words of Krishna, ‘I am death the destroyer of all’ (10th Teaching, stanza 34—Bhagavad-Gita, p. 94). Indeed, according to Robert Jungk’s book about the Manhattan Project, Brighter Than a Thousand Suns: A Personal History of the Atomic Scientists (San Diego: Harvest, 1970), all of those present—even the irreligious, who were the majority—‘recounted their experiences in words derived from the linguistic fields of myth and theology’ (Jungk, p. 201). Jungk quotes General Farrell:

The whole country was lighted by a searing light with an intensity many times that of the midday sun. . . . Thirty seconds after the explosion came, first, the air blast pressing hard against the people and things, to be followed almost immediately by the strong, sustained, awesome roar which warned of doomsday and made us feel that we puny things were blasphemous to dare tamper with the forces heretofore reserved to the Almighty. Words are inadequate tools for the job of acquainting those not present with the physical, mental and psychological effects. It had to be witnessed to be realized. (Jungk, p. 201)

Perhaps foreseeing this, Edward Teller had responded just 12 days earlier to calls among the scientists to petition the government to avoid military use of nuclear technology by writing, ‘I have no hope of clearing my conscience. The things we are working on are so terrible that no amount of protesting or fiddling with politics will save our souls’ (see the whole letter here).

It is apropos that this terrible destructive force unleashed by man is compared directly to the manifestation of the demonic god Krishna, at the sight of whom Arjuna’s hair ‘bristled on his flesh’ (Bhagavad-Gita, p. 99). Evil, destructive energy, whether man-made or arising directly from hell, is the antithesis of that Light which, according to Elder Sophrony, ‘softly enveloped me and gently invaded my heart, in some curious fashion making me feel compassionate and loving towards people who treated me harshly’ (Archimandrite Sophrony [Sakharov], We Shall See Him as He Is, trans. Rosemary Edmonds [Platina, CA: St Herman of Alaska Brotherhood, 2006], p. 184).

Let us prayerfully remember the 140,000 dead of Hiroshima, consumed by this terrible force, ‘burnt by the sun’.
Addendum: I would like to add the following passage from the letters of J.R.R. Tolkien in which he comments to his son Christopher on the atomic bombs.

The news today about ‘Atomic bombs’ is so horrifying one is stunned. The utter folly of these lunatic physicists to consent to do such work for war-purposes: calmly plotting the destruction of the world! Such explosives in men’s hands, while their moral and intellectual status is declining, is about as useful as giving out firearms to all inmates of a gaol and then saying that you hope ‘this will ensure peace’. But one good thing may arise out of it, I suppose, if the write-ups are not overheated: Japan ought to cave in. Well we’re in God’s hands. But He does not look kindly on Babel-builders. (J.R.R. Tolkien, The Letters of J.R.R. Tolkien, ed. Humphrey Carpenter with Christopher Tolkien [Boston: Houghton Mifflin, 1981], p. 116.)