'A Tutor in Whom One Could Confide'—Nevill Coghill, Inkling 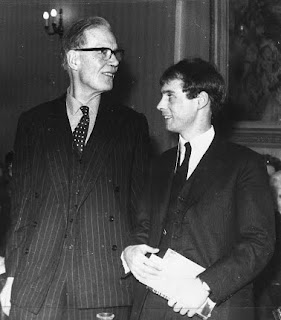 Yes, I’ve nearly let the whole day get away with no post, but I’ve got a good reason. I’ve been devoting nearly all of my time this week to my thesis, since I hope to finally finish it soon. For this reason, posting may be rather sporadic over the next few weeks, and it may have to cease entirely at some point. Do not despair. I shall return, and probably sooner than later.

Tonight I would, however, like to do a very brief post that I’ve entertained for some time now. Ever since I first became acquainted with his name in the lovely book, C.S. Lewis: Images of His World, by Douglas Gilbert and Clyde S. Kilby, (Grand Rapids, MI: Eerdmans, 1973), I’ve been a little bit interested in Nevill Coghill. This interest grew enormously though when his name began to pop up in some unexpected places. First, here is the brief bio included with his translation of the Canterbury Tales (Geoffrey Chaucer, The Canterbury Tales, trans. Nevill Coghill [Harmondsworth, UK: Penguin, 1985], p. 1):

Professor Nevill Coghill held many appointments at Oxford University, where he was Merton Professor of English Literature from 1957 to 1966, and later became Emeritus Fellow of Exeter and Merton Colleges. He was born in 1899 and educated at Haileybury and Exeter College, Oxford, and served in the Great War after 1917. He wrote several books on English Literature, and had a keen interest in drama, particularly Shakespearean. For many years he was a strong supporter of the Oxford University Dramatic Society, and produced plays in London and Oxford. The book of the musical play, Canterbury Tales, which ran at the Phoenix Theatre, London, from 1968 to 1973 was co-written by Nevill Coghill in collaboration with Martin Starkie who first conceived the idea and presented the original production. His translation of Chaucer’s Troilus and Criseyde into modern English is also published in the Penguin Classics. Professor Coghill, who died in November 1980, will perhaps be best remembered for this translation which has become an enduring bestseller.

Quite professional, yes, but here is the passage in Surprised by Joy from which Gilbert and Kilby quote (The Inspirational Writings of C.S. Lewis [NY: Inspirational, 1997], p. 117):

No sooner had I entered the English School than I went to George Gordon’s discussion class. And there I made a new friend. The very first words he spoke marked him out from the ten or twelve others who were present; a man after my own heart, and that too at an age when the instantaneous friendships of earlier youth were becoming rather rare events. His name was Nevill Coghill. I soon had the shock of discovering that he—clearly the most intelligent and best informed man in the class—was a Christian and a thorough-going supernaturalist. There were other traits that I liked but found (for I was still very much a modern) oddly archaic; chivalry, honor, courtesy, ‘freedom’, and ‘gentillesse’. One could imagine him fighting a duel. He spoke much ‘ribaldry’ but never ‘villeinye’. Barfield was beginning to overthrow my chronological snobbery; Coghill gave it another blow. Had something really dropped out of our lives? Was the archaic simply the civilized, and the modern simply the barbaric? It will seem strange to many of my critics who regard me as a typical laudator temporis acti that this question should have arisen so comparatively late in my life. But then the key to my books is Donne’s maxim, ‘The heresies that men leave are hated most.’ The things I assert most vigorously are those that I resisted long and accepted late.

Coghill’s name turned up in other places as well. According to this biographical sketch of John Masefield, ‘Masefield established the Oxford Recitations—a contest for verse speaking held in Oxford and was also to collaborate with Nevill Coghill in establishing the Oxford Summer Diversions—a festival of recitals, plays and ballet.’ Coghill’s activity producing plays and working with the Oxford Union Dramatic Society (mentioned above, in the Penguin bio) included some work with two very famous actors. From this article in Oxford Today: The University Magazine:

Perhaps most memorable of all, and certainly the production that created the biggest razzmatazz, was Nevill Coghill’s legendary revival in 1966 of Marlowe’s Dr Faustus, with former pupil Richard Burton and Elizabeth Taylor. The pair, then at the height of Hollywood celebrity, forswore any fee, and the OUDS students who provided the supporting cast also appeared in the film version of Faustus, made by the couple in Rome the following year. Sadly, that proved a flop, so Burton and Taylor provided the money for the nearby Burton Taylor Studio that the film’s profits were supposed to finance.

After re-reading Marlowe’s play, I got the film—co-directed by Coghill and Burton—from Netflix. It is surreal in a very 1960’s sort of way. I imagine Anton LaVey enjoyed it immensely. A contemporary review in that pesky little Time magazine says, ‘Visually, the Burton Faustus is a darkling carnival of skeletons, candles, caves and necromancy, tricked out with such cinematic hocus-pocus as action shots montaged into a skull’s eye-socket and heartbeats lub-dubbed onto the sound track.’ Strangely, however, the reviewer doesn’t like it.

Here is a blog post about Coghill’s book, The Poet Chaucer, while this one has a very partial Coghill bibliography. This blog tells a wonderful story about Coghill’s readings of his Chaucer translations:

Professor Coghill used to appear on request before various groups to read from his Chaucer translations, and, on one occasion which he cherished long after, a lady came up afterwards and said, ‘That was wonderful. Thank you so much. We are so sorry that Mrs Chaucer was unable to come with you.’

Most recent, and what finally prompted me to do this post, was my passing glance at the dedication page of Auden’s The Dyer’s Hand and Other Essays (NY: Vintage, 1968), p. 7:

Three grateful memories:
a home full of books,
a childhood spent in country provinces,
a tutor in whom one could confide.

Then this post reminded me of the following letter (#275), written from Tolkien to Auden (The Letters of J.R.R. Tolkien, selected and ed. Humphrey Carpenter, asst. Christopher Tolkien [Boston: Houghton Mifflin, 1981], p. 359):

[Auden had invited Tolkien to contribute to a festschrift marking the retirement of Nevill Coghill. . . .]

I still feel grieved that I haven’t anything for Neville’s [sic] festschrift. I hope that perhaps an arrangement will be made in the book for people in my position to register their good wishes. The only thing I have ever written about Neville was:

That was a time when under the name of Judson he was writing what I thought very good and funny verses lampooning forward-looking men like Norwood of St John’s.

Every reader will make what he can of this volte-face that is of such astonishing poetic force and simplicity; for myself I cannot see that Chaucer in any way un-says what he has so long and understandingly been recounting—the feverish desires, the tendernesses, the anguish, the ecstasy, the pledges, the false hopes, the racks of doubt, the risks of Fortune—every human experience of the affections from despair to bliss and back again to despair, that arise in the story he has told us. They are all part of the overwhelming experience of human love, and have their own beauty, virtues and weaknesses, and susffer from their tragic impermanence. Such is ‘the love of kind’; but it has, as it were, an elder sister in celestial love, compared with which human love is a feigning; that is ‘eterne on lyve’, and will ‘falsen no wight’. Many will say this is no resolution of the paradox, just to be advised to relinquish the vanities of the world, to reach for the substance, not the shadow. But Chaucer seems to say that these are his conclusions, and I do not see that he says more; the love of Troilus is never condemned outright, never condemned by him as sin; but as sorrow, the double sorwe of which the poem set out to tell us. We live in an insecure and sorrowful world.

And here, to boot, is the opening of his Canterbury Tales translation (Chaucer, Canterbury, p. 19):

When in April the sweet showers fall
And pierce the drought of March to the root, and all
The veins are bathed in liquor of such power
As brings about the engendering of the flower,
When also Zephyrus with his sweet breath
Exhales an air in every grove and heath
Upon the tender shoots, and the young sun
His half-course in the sign of the Ram has run,
And the small fowl are making melody
That sleep away the night with open eye
(So nature pricks them and their heart engages)
Then people long to go on pilgrimages
And palmers long to seek the stranger strands
Of far-off saints, hallowed in sundry lands,
And specially, from every shire’s end
Of England, down to Canterbury they wend
To seek the holy blissful martyr, quick
To give his help to them when they were sick.

In conclusion, the photo above, taken from this page, is the only one I could find online. It depicts Coghill (on the left) in his rôle as President of the Poetry Society, London, with a young Gavin Bantock, after the latter received the Alice Hunt-Bartlett Poetry Prize, 31 March 1967.
Posted by Aaron Taylor at 11:22 PM