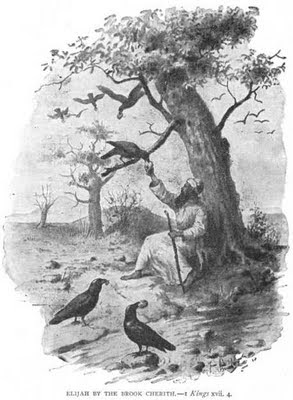 Some time ago I did a post on ravens which ended up being one of my own personal favourites on this blog. I’d now like to add a couple of things to the ‘raven lore’ there. First of all, as I was reading through Despina Prassas’s introduction to her translation of St Maximus the Confessor’s Questions & Doubts (DeKalb, IL: Northern Illinois U, 2010), I came across a reference (on p. 26) to a question that deals with the incident of the Prophet Elijah being fed by ravens in III Kings 17:2-6 (LXX). Quite in keeping with the general thrust of human views of ravens, here is the question and answer in full:

Question 185
Why, ever, does a raven sustain Elias with bread in the morning and meat in the afternoon?

The raven represents nature blackened through disobedience, and Elias sitting in the gully represents the knowledgeable nous sitting in the gully of temptations and labors of askesis. He is nourished in the morning by bread from the blackened nature, that is, by gathering knowledge from the natural contemplation of the things that exist, and in the afternoon by meat. For he is initiated into the mystery of the incarnation of the Lord that will occur at the end times, because, certainly, the one who created nature out of nonbeing, will also restore it when it is corrupted. Or [to interpret this] in another way: Elias represents a type of the Lord. For when a spiritual famine held all hearts in captivity, he went into the gully, that is, into life, voluntarily accepting temptations and sufferings; and ‘when he came into his own house, his own people did not accept him’ (Jn 1:11), nor did they nourish him. But the nations that had been blackened by idolatry welcomed and nourished him through knowledge and action, knowledge being signified by the bread and action by the meat.

It is interesting to note that it is precisely in discerning the type of the Lord that St Maximus’s interpretation dovetails most closely with the apparently Semitic interpretive tradition outlined in the blog to which I link in my earlier post and expressed later by the commentary of Isho’dad of Merv that I quoted there.

The other thing I wanted to add is a brief bit of verse from Susanna Clarke’s Jonathan Strange & Mr Norrell, 3 vols. (NY: Bloomsbury, 2004) that I have wished to post for some time now and couldn’t find an excuse for. Anyway, it concerns the legendary ‘Raven King’, John Uskglass, and the ‘contract’ with England that I mentioned in my previous post:

This traditional English saying supposedly lists the various contracts which John Uskglass, the Raven King, made on England’s behalf with the forests. (V. 2, p. 223, n. 4)

Incidentally, as I was formatting this post, my 4-year-old son was showing my wife a little raven perched on part of a mediæval playset he has and telling her that he calls it ‘the Halloween bird’.
Posted by Aaron Taylor at 12:10 PM

Your raven posts are among my favorites too.